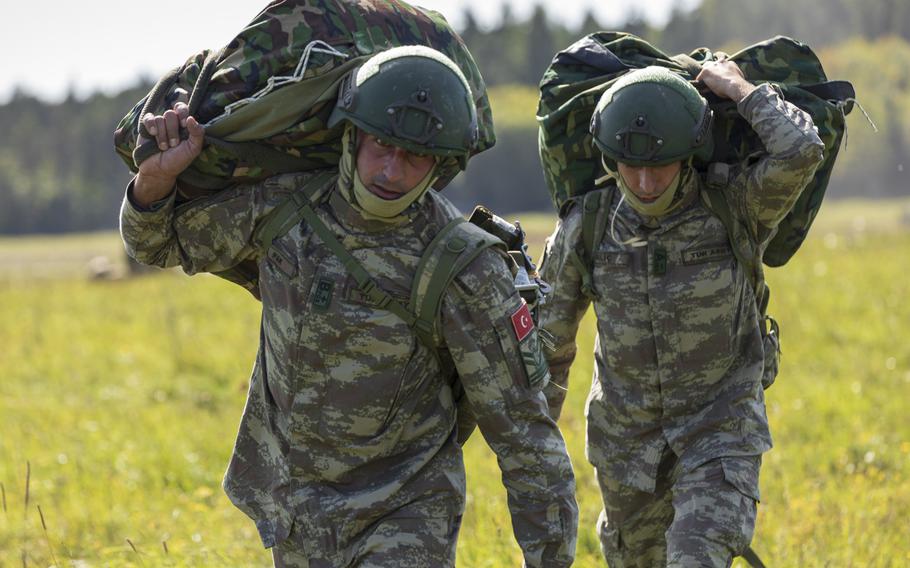 Turkish Armed Forces soldiers maneuver into position after an airborne training jump Sept. 18, 2019. U.S. lawmakers have proposed sanctions on Turkey that would ban military assistance and prohibit the sale of any equipment to the Turkish armed forces in response to its invasion of Syria. (Thomas Mort/U.S. Army)

U.S. lawmakers are preparing a bill that would impose sweeping sanctions on Turkish military and political leaders, including President Recep Tayyip Erdogan, in response to Turkey’s invasion of Syria.

Republican Sen. Lindsey Graham and Democrat Sen. Chris Van Hollen on Wednesday drafted framework legislation that spells out who the sanctions would target.

“These sanctions will have immediate, far-reaching consequences for Erdogan and his military,” Van Hollen said in a statement.

The draft legislation is expected to come up for a vote later this month when Congress reconvenes. Graham has said he believes he could muster the necessary votes in the Senate to pass the bill.

The bipartisan legislation would ban military assistance to Turkey and prohibit the sale of any equipment to the Turkish armed forces, such as weapons and spare parts used by Turkey’s air and ground forces. Assets held in the U.S. by Erdogan and other top government officials would be frozen, according to the bill.

President Donald Trump told reporters at the White House on Wednesday that he could support sanctions or something “much tougher than sanctions” if Turkey’s invasion isn’t done in “as humane a way as possible.” However, Trump said in September that the U.S. and Turkey shared a “great friendship” and that he attributed much of that to his personal relationship with Erdogan.

The sanctions would go into effect unless the Trump administration certifies to Congress every 90 days that Turkey is not operating unilaterally in the affected area in Syria and has withdrawn its armed forces, including Turkey-supported rebels, the draft legislation says.

The move could provoke threats from Turkish leaders over U.S. military access at Incirlik Air Base, a strategic hub in the country used by both the Turkish and U.S. air forces. Turkish officials have, in the past, used U.S. access to the base as leverage during policy disagreements.

The proposed legislation comes amid a bipartisan backlash against Trump’s decision to not stand in the way of Turkey’s offensive in northern Syria. It began Wednesday with an air and ground assault against Kurdish forces who have been closely allied with the U.S. in the battle against the Islamic State group.

Critics of Trump say giving Erdogan tacit approval for the invasion could result in the resurgence of ISIS in Syria since it will likely divert the resources and focus of the Kurds, who guard prison camps filled with the militants.

Turkey regards Kurdish-led militias in Syria as an extension of the Kurdistan Workers’ Party, or PKK, which Ankara has long considered a top enemy and terrorist group.

While the U.S. sees its Kurdish allies as separate from the PKK, it has never been able to assuage Turkish concerns over its partnership with them. The U.S. strategy in the region also has never fully taken into account the political complications of Kurdish territorial ambitions in northern Syria.

Graham, however, has made clear that if forced to choose, the U.S. should side with the Kurds over longtime NATO ally Turkey. The South Carolina Republican, who has generally supported Trump, has taken to social media in recent days to blast the president’s decision, which he has described as a betrayal of the Kurds.

“Most members of Congress believe it would be wrong to abandon the Kurds who have been strong allies against ISIS,” Graham wrote in a Twitter post Wednesday.

He added: “NEWSFLASH: Erdogan and humane do not belong in the same sentence. Worst is yet to come.”