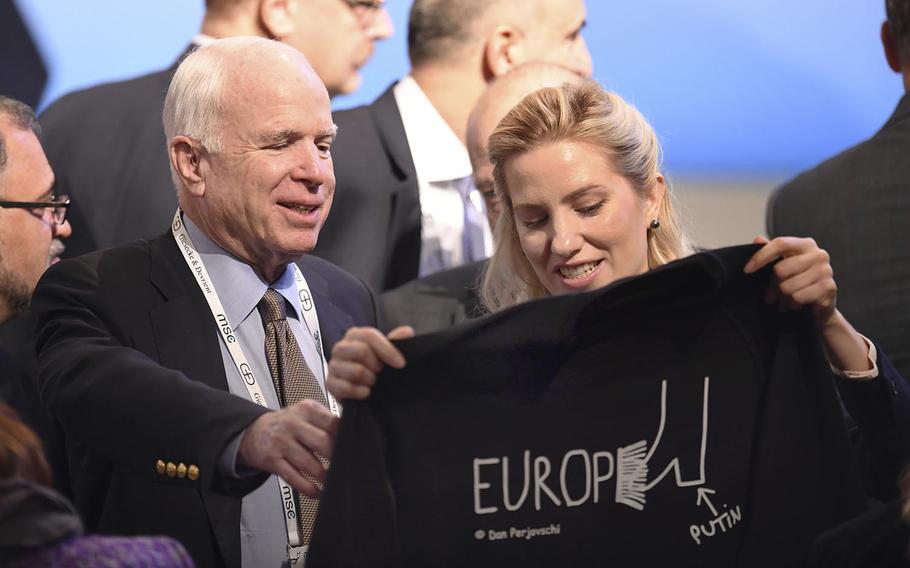 U.S. Sen. John McCain smiles as he receives a shirt on the last day of the Munich Security Conference in Munich, southern Germany, Sunday, Feb. 19, 2017. (AP)

U.S. Sen. John McCain smiles as he receives a shirt on the last day of the Munich Security Conference in Munich, southern Germany, Sunday, Feb. 19, 2017. (AP) 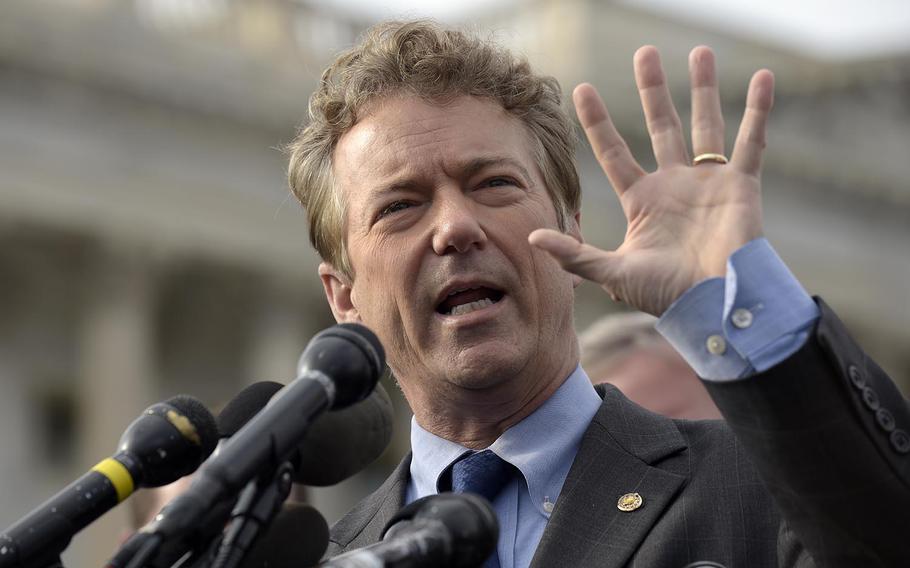 STUTTGART, Germany — Montenegro’s bid to join NATO is on hold after U.S. Sen. Rand Paul blocked the ratification of a treaty to advance the country’s membership, causing fellow Sen. John McCain to accuse the Republican of “working for Vladimir Putin.”

On the Senate floor Wednesday, Paul objected to Montenegro’s membership, delaying the process of incorporating the tiny Balkan state into the 28-nation NATO alliance.

That sparked furious response from McCain, the hawkish Arizona Republican. “The senator from Kentucky is now working for Vladimir Putin,” he said.

McCain’s accusation that a fellow senator was serving the interests of Russia borders on unprecedented, and comes at a time when many in Washington are fixed on allegations that Moscow meddled in the recent U.S. presidential election.

On Montenegro’s NATO membership, McCain said, “I have no idea why anyone would object to this. Except that I will say, if they object they are now carrying out the desires and ambitions of Vladimir Putin, and I don’t say that lightly.”

Paul’s move is unusual given that such votes of ratification are more of a formality after a prospective NATO member has cleared a lengthy multi-year process of meeting various NATO standards. Last year, NATO members formally agreed that Montenegro was destined for alliance membership.

However, prospective members must win approval from NATO members' parliaments, as well as the unanimous endorsement of the U.S. Senate. Since last summer, the legislatures of 25 member states have ratified the accession treaty.

Rand did not offer an explanation for his objection inside the Senate, but later offered a statement to various news outlets.

Paul said it would be unwise to take on additional military obligations, such as extending NATO members to more nations that the U.S. would be required to defend.

The issue of NATO expansion has been a source of tension between the West and Russia, which bristles over former Warsaw pact states such as Poland and Romania joining the alliance as well as the former Soviet states in the Baltics. Moscow also opposes a plan for the republic of Georgia to eventually join NATO, a bid that also divides some NATO members.

However, Moscow has been somewhat less vocal in its opposition to Montenegro’s membership than other states — the country of 620,000 people is smaller than Connecticut and is far from Russia’s borders. Still, there has been some disagreement over NATO membership inside Montenegro itself, with Russian-backed Serb nationalists opposed to membership reportedly attempting a coup during recent national elections.