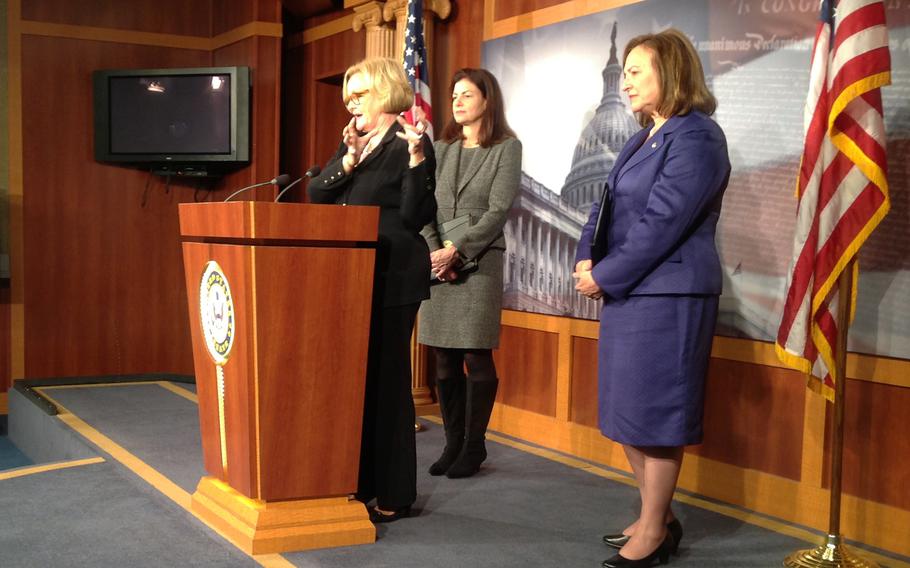 Buy Photo
Sen. Claire McCaskill, D-Mo., speaks in November 2013 about a bipartisan amendment to strengthen and augment the package that passed the Armed Services Committee in June to curb military sexual assault. With her are Sen. Kelly Ayotte, R-N.H., and Sen. Deb Fischer, R-Neb. (Stars and Stripes)

WASHINGTON — Three senators opposed to the idea of removing prosecutorial decisions from the chain of command on Thursday announced new amendments to their bill aimed at reducing sexual assault in the military.

Sens. Claire McCaskill, D-Mo., Kelly Ayotte, R-N.H., and Deb Fischer, R-Neb., want to change the military rules of evidence to remove the “good soldier” defense unless a defendant’s good military character is directly relevant to an element of the crime they are charged with, allow victim input in the prosecution process, allow sexual assault victims to challenge their discharge or separation from the military and require service secretaries to review any case in which a prosecutor recommends a case go forward and the commander disagrees.

Sen. Kirsten Gillibrand, D-N.Y., has gathered bipartisan support for a competing bill, which would remove the authority to prosecute serious crimes, including sexual assault, from military commanders and place it in the hands of trained prosecutors.

But though Gillibrand has a majority of the Senate supporting her bill, she is considering limiting the bill in an effort to get support from a super-majority of 60 Senators, which would likely be necessary to make it filibuster-proof. The change would mean that commanders would no longer have the authority to prosecute sexual assault and rape, but would keep the authority to prosecute other major crimes.

The Defense Department opposes Gillibrand's proposal, and Army Chief of Staff Gen. Ray Odierno on Wednesday told reporters at the Pentagon that commanders should stay included in the judicial process.

“I’m against taking commanders out of the process,” Odierno said. “It’s a big mistake.”

Military officials have estimated that a new independent office would cost about $113 million a year to establish, including salaries for about 600 attorneys and staff.

Odierno cited that cost estimate, and also said that changing the existing judicial system would "have a detrimental effect" on the military. However, he also acknowledged that DOD officials have received a "wake-up call" on the need for improved reporting and prosecuting of sexual assaults.

The Pentagon has estimated that as many as 26,000 military members may have been sexually assaulted last year, up from an estimated 19,000 assaults in 2011.

McCaskill and Ayotte, both former prosecutors, have said taking that authority away from commanders would also remove commander accountability.

Asked why she could not work out the bill’s differences with Gillibrand, McCaskill said, “there was just a fundamental policy difference on whether to make commanders more accountable, or less.”

McCaskill and her co-sponsors assert that their proposal actually improves accountability by keeping prosecutorial decisions within the chain of command. Ayotte, for example, said commanders would otherwise be reduced to becoming “bystanders.”

“If we take this out of the chain of command, where will that accountability be?” she said. “We will be looking to make commanders more accountable, not less.”

McCaskill went further, saying Gillibrand’s amendment would lead to court challenges — “a mess” — but stopped short of addressing any personal differences with the New York senator.

“Maybe it would be sorted out, but it certainly has not been thought through,” McCaskill said of the Gillibrand amendment. ”But look, I just want to get the policy right. I care too much about victims. I’ve been doing this my whole life.”

McCaskill also said she is avoiding Gillibrand’s strategy of considering changes to her amendment to win more votes. But she said she is vetting her proposal with legal scholars, the military and others.

The competing efforts have created a lobbying and public relations war between two, who agree on issues more often than not. The winner gets their amendment into the National Defense Authorization Act, which will be voted on sometime before Congress adjourns next Friday for Thanksgiving recess.

Because the proposals are so controversial, they will almost certainly require a super-majority of 60 votes.

At a press conference last week, Gillibrand said she has been guaranteed a floor vote on her amendment, which would remove sexual assault prosecution decisions from the military’s chain of command and assign it instead to an independent military judge. At her press conference Thursday, McCaskill said she wasn’t sure how her proposal will be handled as Senate leaders continue negotiating on amendments and floor procedure.

However, McCaskill did say her proposal has the support of Armed Services Committee Chairman Carl Levin, D-Mich. Levin is opposing the Gillibrand amendment.

Changing the military justice system to take away a commander’s ability to prosecute sex crimes but not other serious crimes is illogical, he said.

“We want to have one system of military justice.”