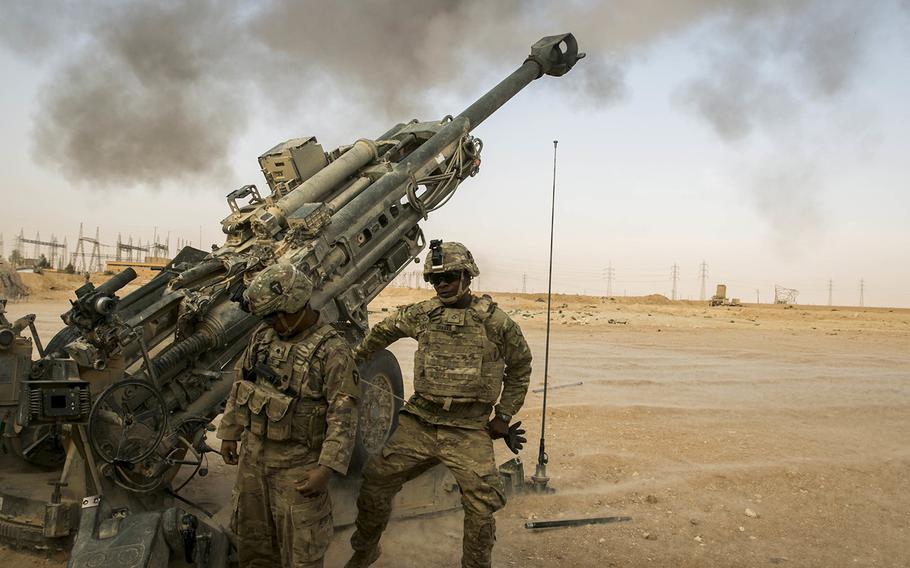 U.S. Army artillery soldiers respond to a fire mission in support of Operation Inherent Resolve in Iraq on Nov. 6, 2017. Some lawmakers in Washington are looking to revise the president’s authority to use military force. (Frank Cordoba/U.S. Marine Corps)

WASHINGTON — As global threats to the United States escalate, Congress will need a new war authorization to remain relevant in current and future military engagements, a Senate panel said Wednesday.

The hearing was one in a series of committee hearings held in the last several months to re-examine, and potentially rein in, the president’s authority to use military force, or AUMF, powers.

On Wednesday, some lawmakers signaled President Donald Trump’s administration appears to be running amok as far as such war powers are concerned.

The president’s current war powers were issued in 2001 after the 9/11 terrorist attacks and 2002 when the United States went to war in Afghanistan and Iraq. The 2001 and 2002 AUMFs gave the president wide-ranging authority to direct the military to fight terrorist groups such as al-Qaida, the Taliban and Islamic State around the world.

Since that time, the military has operated under those authorizations in more than a dozen countries.

“We need to write new (war) authorization … to make legal for Congress to weigh in on what the administration is already doing, to make us relevant,” said Sen. Bob Corker, R-Tenn., the committee chairman. “It’s kind of an odd thing.”

Concern about the current war authorizations has been debated for years, but it has reached a fevered pitch in recent months in light of recent, deadly military encounters, such as the attack in Niger on Nov. 4 that left four soldiers dead, and the rising tensions with North Korea.

Trump “might even seek a nuclear-first strike, …and we would have to rely on the strength, character and bravery of those with the military responsibility for carrying out that attack to question its legality,” Cardin said about North Korea. “We have a president who has a reckless self-confidence of his own instincts and makes decisions without relying on his own advisers.”

Stephen Hadley, former national security adviser for former President George W. Bush, testified Wednesday that the White House and Congress should already be in talks to address the North Korea military strategy, if one is to be executed.

“The North Korea situation is so grave that Congress and the president should be having conversations now, and continuing,” he said.

“The war powers resolution is outdated,” Bellinger said. “And it should be revised.”

But how the war authorizations should be revised remains a question.

A slew of House and Senate members have proposed a variety of approaches, as less than one-third of the Congress serving today was involved in the current war authorizations.

Among the proposals, some lawmakers have said it’s time to replace the president’s war powers with one that has time or geographical limits.

“I personally worry that the U.S. military has been carrying a very heavy burden for many years now,” she said. “And that an imbalance has crept into how we address foreign policy challenges.”