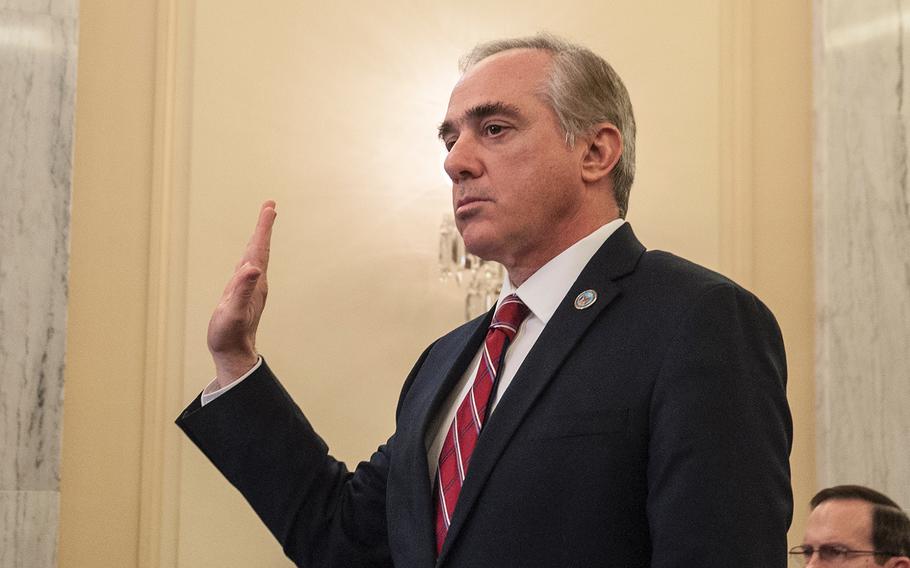 Buy Photo
VA Secretary David Shulkin raises his hand to take an oath before the start of a Senate Committee on Veterans Affairs hearing on Wednesday, Jan. 17, 2018, on Capitol Hill in Washington, D.C. (Carlos Bongioanni/Stars and Stripes)

WASHINGTON — Why four top jobs within the Department of Veterans Affairs remain unfilled nearly one year after President Donald Trump took office drew the attention of members of the Senate Veterans’ Affairs Committee on Wednesday as they questioned VA Secretary David Shulkin about the state of the agency.

The VA, the second-largest federal department, is operating without permanent leaders for its benefits administration and large health care system. Also missing are its IT leader and the assistant secretary for the agency’s new accountability and whistleblower protection office. The leadership void came up at the Senate Veterans’ Affairs Committee hearing, where Shulkin gave testimony on the “State of the VA.”

“One thing that concerns me deeply is the four positions that remain unfilled in the department,” said Sen. Johnny Isakson, R-Ga., the committee chairman. “I know you’re trying, but this is one of those things where an ‘A’ for effort isn’t enough.”

The job of undersecretary for benefits has been vacant since October 2015, when then-undersecretary Allison Hickey resigned after being implicated in a government watchdog report for helping two VA employees manipulate the department hiring system.

The VA created a commission last spring to choose a new undersecretary. Shulkin told senators Wednesday that the commission sent three names to the White House. Their first choice for the job withdrew, Shulkin said, and Trump’s administration is now vetting the second choice.

Also going through the vetting process is a candidate selected to serve as assistant secretary for information technology, Shulkin said.

Filling the position of undersecretary for health – Shulkin’s old job – has proven to be more of a challenge. Two separate commissions were created last year to find candidates, and both failed to select anyone, Shulkin said.

“We plucked you out of the job to lead the VA,” Isakson said. “That was a good idea. The bad idea is we still don’t have anybody in your place as undersecretary of health.”

Responding to the committee’s concerns, Shulkin said another commission, led by Deputy VA Secretary Thomas Bowman, will convene Jan. 25 and 26. The commission will be tasked with choosing three candidates for the undersecretary of health job and send them to the White House for consideration Jan. 26.

Former President Barack Obama appointed Shulkin undersecretary of health in 2015, a job in which he led the country’s largest health care system, with more than 160 medical centers and 900 outpatient clinics that serve 9 million veterans. Shulkin called the position “one of the hardest jobs in America.”

“It’s one with wide criticism and public scrutiny,” he said. “You have to find the person with both the skills to do it, as well as the passion for the job and the willingness to take on such a challenge. This is an essential position for us, so we have to get it right.”

Dr. Carolyn Clancy, who has been with the VA for longer than 10 years, is filling in as undersecretary of health in an interim roll. She took over in October, after the pervious interim undersecretary, Dr. Poonam Alaigh, unexpectedly stepped down from the position.

“We have an excellent acting undersecretary, and I’m very confident in her capabilities,” Shulkin said. “So, we will continue with recruitment until we get the right person.”

Peter O’Rourke leads the VA’s new accountability and whistleblower protection office and is responsible for choosing an assistant secretary. Shulkin told senators Wednesday to follow up with him about that vacancy.