Senator: Report on Navy collisions out by week’s end 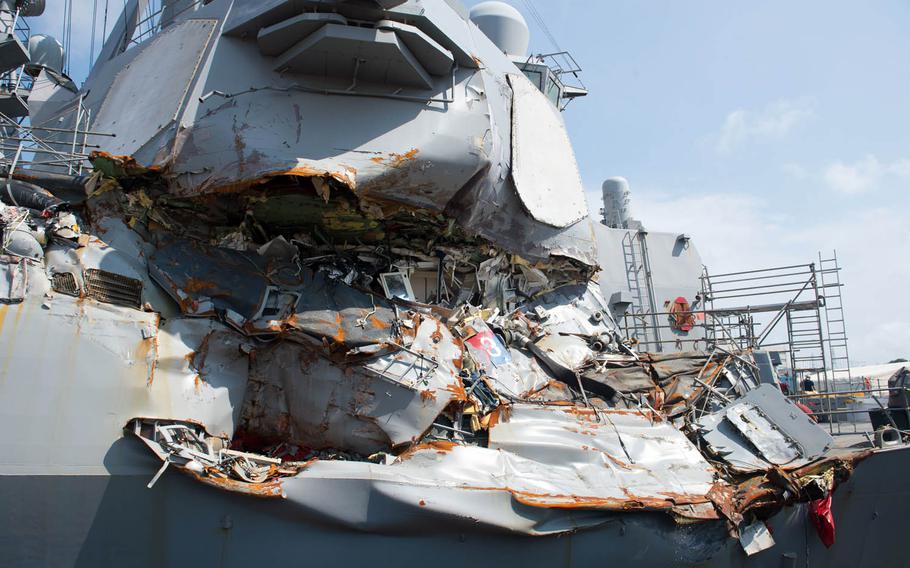 The guided-missile destroyer USS Fitzgerald sits in dry dock over the summer at Yokosuka Naval Base, Japan, to continue repairs and assess damage sustained from its June 17 collision with a merchant vessel. This view shows damage above the waterline to the outside skin of the ship. (Christian Senyk/U.S. Navy)

WASHINGTON — A Navy report, which could be released by week’s end, is expected to show that a multitude of factors, including training deficiencies and funding shortages, contributed to two deadly ship crashes during the summer.

Several senators emerged from a classified hearing of the Senate Armed Services Committee on Tuesday pointing to those factors and others as playing a role in the Navy ship crashes that left 17 sailors dead.

Sen. Roger Wicker, R-Miss., said the Navy has reached a conclusion on the causes behind the crashes and he expects their public report will be released by week’s end.

“In this case, there were judgment mistakes, training mistakes, failure to adhere to procedures,” Wicker said. “But in general, we are asking too few ships to do too many things.”

Tuesday’s meeting follows several public congressional hearings held earlier in the year to assess what might have led to the crashes of the USS John S. McCain in August and USS Fitzgerald in June.

Since the collisions, several top officials for the Navy’s 7th Fleet have been relieved of their duties. Navy officials also directed a review of their surface fleet operations.

Navy officials have said their ongoing probes into the crashes would be completed this fall. The first of several Navy probes was slated to be completed by mid- to late October, Richardson said in a previous hearing.

A Government Accountability Office report earlier this year found the Navy was behind on addressing a long list of outstanding and urgent readiness issues. The agency highlighted among its largest concerns an increase in the number of ships based overseas, crew-size reductions that have contributed to overworked sailors and a possible increase in safety risks as well as an inability to complete maintenance on time.

The Navy has 277 ships, a 17 percent decline from its 333 ships nearly two decades ago, the report noted.

“There are operational things we still need answers to, but they were very forthcoming,” McCain said. “They will be providing us with additional information as they reach conclusions. The investigation is still going on but we got good information.”

As far as early conclusions go, there were several contributors, McCain said.

“It’s a whole bunch of problems that cause ships to run into each other,” he said.

McCain has long harped on concerns that the military has been woefully underfunded for years as demands have increased. Budget cuts and temporary funding bills have worsened the concern for years, he said.

“You can’t cut military defense funding 25 percent over the last six years and think it’s not going to have an impact,” he said. “There’s tactical things they are looking at, training, but it’s our job to look at the larger macro issues.”

The funding shortages, along with overworked sailors, remain major concerns, McCain said. Sailors are still logging 100-hour work weeks, he said, which he railed against during his last hearing on the Navy collisions.

On Tuesday, McCain said the Navy is trying to address the training deficiencies and other concerns. But funding shortages are blocking those efforts, he said.

“We’ve deprived them of the funds to do it,” McCain said. “We have put those men and women in harm’s way... It’s a failure of Congress. It’s on us.”

Talks are underway for a House and Senate conference committee to negotiate a robust $700 billion defense bill. But the plan faces a battle later this year, since the bill will require special congressional action to exceed a defense spending cap, which keeps the budget at $549 billion.

On Tuesday, McCain said those talks could wrap up this week.