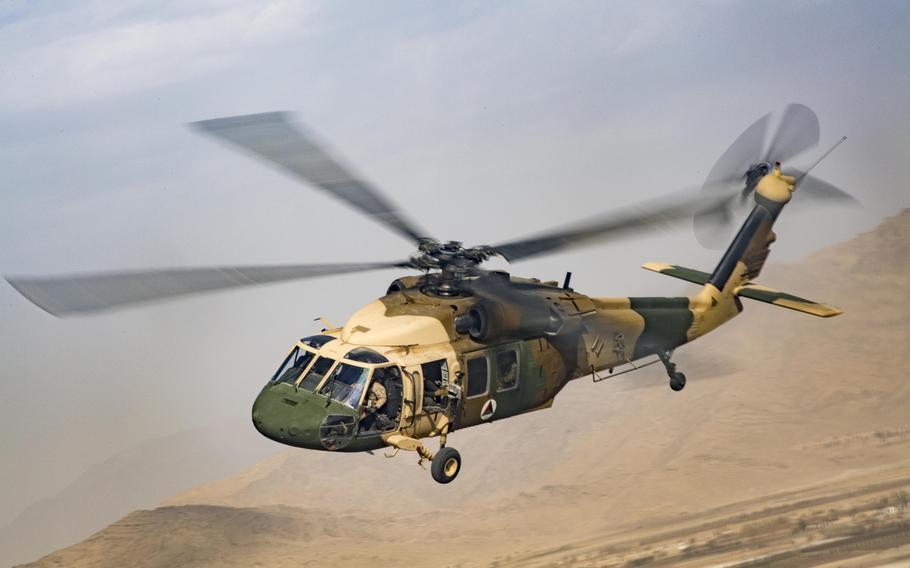 An Afghan Air Force UH-60 Black Hawk flies during a NATO-led mission in Afghanistan in 2018. The U.S. is providing less money and fewer Black Hawks and advisers to the Afghan air force. (Clayton Cupit/U.S. Air Force)

KABUL, Afghanistan — A senator on the Armed Services Committee has asked the Pentagon to explain why it has proposed yet another helicopter model for the Afghan air force instead of the Black Hawks it has been sending for years.

Sen. Richard Blumenthal, D-Conn., questioned what he saw as an “abrupt change in aviation procurement and unclear strategic justification” in a letter sent Thursday to the Pentagon and shared with Stars and Stripes.

The Sikorsky Aircraft Corp., which makes Black Hawks, is headquartered in Connecticut.

The number of Black Hawks provided to the air force will be capped at 53 instead of the 159 pledged in 2016, to replace the country’s aging Russian-made Mi-17 helicopters, said a Defense Department report to Congress.

“Reductions were made on the basis of a review of future operational requirements,” said the Enhancing Security and Stability in Afghanistan report released last week.

The report also said the U.S. plans to send an unknown number of Boeing CH-47 Chinook helicopters to an elite Afghan air unit to replace its aging Russian-made Mi-17 helicopters. Sanctions bar the U.S. from buying Russian aircraft or spares to keep them flying, though some Afghan pilots have said they favor them.

Blumenthal expressed concern about “the challenges the Afghan Air Force will face moving forward, particularly as they are required to accommodate another new aircraft.”

“Given the known, ongoing challenges with the transition from the Mi-17 helicopters to the UH-60As— including maintenance shortfalls, inefficient training for pilots and maintainers, and failure to maximize flight hours on the new UH-60As — I am concerned that this platform diversification will exacerbate these challenges, compromise the mission, and ultimately hurt our Afghan partners,” he wrote.

In addition to capping the number of Black Hawks, the U.S. reduced funding to maintain the Afghan airframes, the Pentagon said.

“How will the decision to provide fewer UH-60A Black Hawks to the Afghan Air Force impact … sustainment costs, and how do the UH-60A sustainment costs compare to those of the CH-47 Chinook?” Blumenthal wrote.

Sustainment costs primarily include contractor-provided maintenance, repairs, and procurement of parts and supplies for the seven air platforms in Afghanistan, the Pentagon said.

A DOD spokesman confirmed the department received Blumenthal's letter and will brief the senator's staff to address his concerns.

The Pentagon declined to comment on how many CH-47 Chinooks will be provided to Afghanistan, or the cost of the program.

Afghanistan’s Defense Ministry was consulted over the U.S. plan to provide Chinooks instead of Black Hawks, spokesman Fawad Aman said.

“The [Chinook] airframe better fits our mission requirements,” he said. “It is able to carry more than three times the number of personnel or equipment.”

The service could be harmed by too many cuts, cautioned retired air force commander Gen. Abdul Wahab Wardak.

“The reduction in funds and airplanes with definitely have a negative impact on the Afghan air force’s operations,” Wardak said by phone. “This will have an impact on the war, logistics, air support and attack missions, because with fewer resources you cannot have broader operations.”