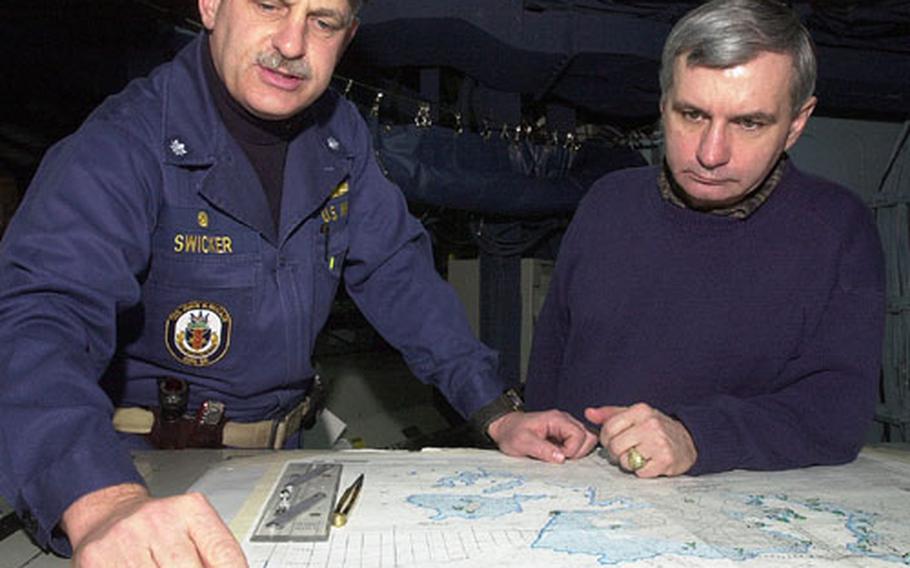 Cmdr. Chip Swicker, commanding officer of the USS John S. McCain, shows the route the Aegis-class destroyer takes out of port to Sen. Jack Reed, D-R.I., on board the ship Saturday at Yokosuka Naval Base, Japan. Reed did a swing through South Korea and Japan last week to meet with servicemembers. (Rick Chernitzer / S&S)

YOKOSUKA NAVAL BASE, Japan &#8212; An aborted trip to North Korea led one U.S. senator to make the most of the situation and say thanks to troops overseas.

Sen. Jack Reed, D-R.I., wrapped up almost a week&#8217;s visit to the Far East on Saturday by visiting sailors stationed at this naval base near Tokyo.

Following a ship tour and briefings Friday aboard the 7th Fleet flagship USS Blue Ridge, Reed had breakfast Saturday morning with sailors aboard the USS John S. McCain. Then, he toured the Aegis-class destroyer&#8217;s engineering and combat-control spaces.

Reed got a look inside the USS Kitty Hawk on Saturday.

He said he initially came to the Pacific to visit North Korea, along with fellow Sen. Carl Levin, D-Mich., to try to defuse what Reed termed an &#8220;extremely tense&#8221; situation. Recently, Pyongyang admitted to covertly restarting its nuclear-research program and demanded that the International Atomic Energy Commission remove its monitoring devices from the stalled reactor units.

&#8220;All of these things, together with the dynamics in South Korea, the anti-Americanism that is flaring up now, all of these factors are important to try to get a sense of &#8230; some kind of perspective,&#8221; he said.

But the visit was called off when Pyong-yang refused to allow State Department representatives to accompany the delegation. &#8220;We don&#8217;t operate like that,&#8221; the senator said.

Still, seeking a diplomatic solution is important, Reed added, especially given President Bush&#8217;s characterization of North Korea earlier this year as part of an &#8220;axis of evil.&#8221;

&#8220;But the notion of a system that is inhumane, that is disrespectful of basic human rights, and that is very dangerous &#8212; that is the description of the North Korean regime.&#8221;

Continuing their nuclear research prompts concern that North Koreans will turn their advances into weaponry, Reed said, &#8220;and what&#8217;s most frightening, will they proliferate that technology and those devices to other countries and terrorist groups? So this is not a situation you can ignore. The hard question is, how do you deal with them?&#8221;

Reed said easing current tensions will require effort from other countries in the region, including China.

&#8220;I&#8217;m not the expert, but it appears the Chinese continue to provide just enough support &#8230; so that the regime will not collapse. And as long as the Chinese do that, you have a regime in which the people are suffering immensely, but the regime is still able to maintain order.

Reed also urged tempering any speculation that impending action against Iraq could begin early next year.

&#8220;It will depend a great deal on what the Iraqis do and how much progress is made with U.N. inspections,&#8221; he said. &#8220;If the United Nations inspection teams are in and working and claiming they&#8217;re making progress and they&#8217;re effective, it would be very difficult for the United States to politically initiate an attack.

Reed, a member of the Senate Armed Services subcommittee on seapower, said he believes the USS Kitty Hawk&#8217;s slated 2008 decommissioning is not written in stone.

With his mission to the north called off, Reed said, he decided to focus on the second part of his trip to the Pacific, thanking the &#8220;remarkable young Americans&#8221; serving overseas.