Senate women ban together on addressing 'plague' of sex assault, even while split on the solution 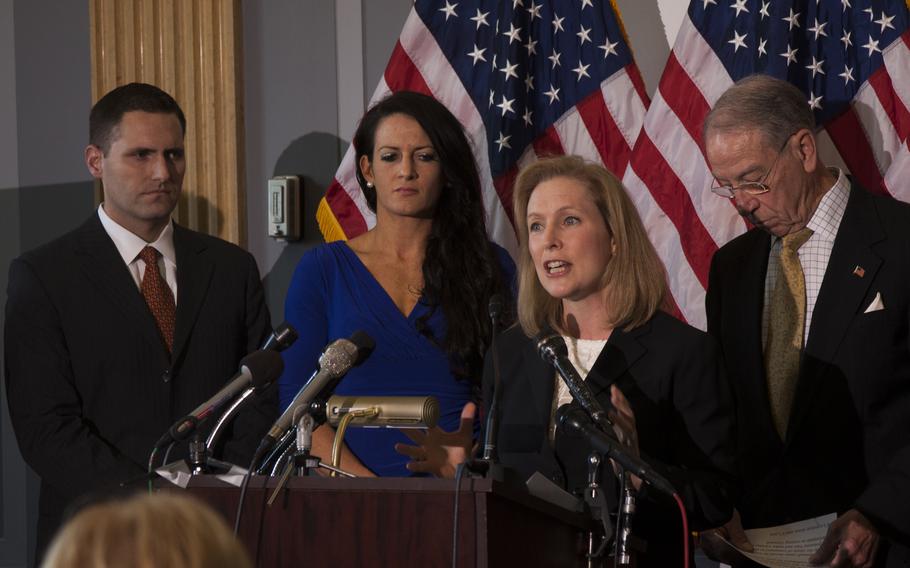 Buy Photo
Sen. Kirsten Gillibrand (D-NY) calls for military sexual assault cases to be removed from the military chain of command on on Nov. 6, 2013 in Washington, D.C. Behind her are Ariana Klay, a former Marine officer who was sexually assaulted and her husband, Ben Klay (left), a former Marine, and Sen. Chuck Grassley (R-Iowa.) (C.J. Lin/Stars and Stripes)

WASHINGTON — The Senate began debating a 2014 defense bill this week by taking aim at possible controversial amendments on federal spending cuts and the prosecution of sexual assaults in the military.

The most recent development by midday Tuesday was the rare spectacle of nine of the Senate’s 20 women, Democrats and Republicans alike, taking to the chamber floor in united fashion to decry the “plague” of sexual assault in the armed services — even as they sharply and publicly disagreed on how it should be addressed.

Democratic leaders said earlier Tuesday morning that they are hopeful of a final vote on the bill — the National Defense Authorization Act — by the time senators leave Thursday night for an 11-day Thanksgiving recess. However, Sen. Carl Levin, D-Mich., who chairs the Armed Services Committee and is managing floor debate on the bill for the Democrats, said such a scenario would be “very difficult” given the number of amendments that will receive floor votes.

It was the Senate women who dominated debate Tuesday, arriving one after another on the chamber floor to speak about sexual crimes in the ranks. The Senate is split between proposals by two Armed Services Committee members. One, by Kirsten Gillibrand, D-N.Y., would remove prosecution decisions from the military chain of command, while the other, by Claire McCaskill, D-Mo., would make a number of improvements but preserve the chain of command.

There are more than a dozen prosecutorial changes in the bill itself, even without the Gillibrand or McCaskill amendments. Defense officials are backing the McCaskill proposal and opposing Gillibrand, and a fierce war has broken out between the two senators’ camps to lobby undecided senators and reach the critical threshold of 60 votes necessary for passage.

“I would be less than candid if I said it wasn’t frustrating to have differences dominate this discussion,” said McCaskill. “But we have fashioned historic and amazing changes that are going to change forever the successful prosecution of rapists in our military and go further to protect victims.”

“We have an opportunity to send a message to the chain of command,” said Sen. Lisa Murkowski, R-Alaska, who is backing Gillibrand’s proposal. “Never again should we have to speak of a culture that allows assault, harassment and trauma generated from within to fester within our military.”

“It’s the best medicine for a difficult situation which has been allowed to languish for far too long,” she said.

On Monday, debate began on the bill with one top Republican taking direct aim at the continuing sequestration spending cuts in the military.

Sen. James Inhofe of Oklahoma, the top Republican on the Senate Armed Services Committee, said the forced cuts were “exacerbating an already-declining national security budget.” He noted that the leaders of all four branches of the armed services had testified before the House and Senate armed services committees that sequestration was devastating military readiness.

“This has never happened before when we are facing a reduction in our military spending that is so unacceptably low that it has caused our leaders in all four services to talk about how this is life-threatening,” Inhofe said.

“I am so troubled with this disastrous path that we’re on; in the face of mounting threats to America, prolonged budgetary uncertainties and the mindless sequestration cuts are crippling the people who are vital to our security — our men and women in the military.”

Inhofe’s opposition isn’t likely to sway many Republicans, as Senate GOP leader Mitch McConnell of Kentucky has already publicly vowed that the party will insist on keeping sequestration as a way to curb federal spending. Some Republican senators last week did tell Stars and Stripes that they will consider giving defense officials more leeway on how to manage the cuts, however.

Sequestration, which took effect in March, would automatically cut about $50 billion from the Pentagon budget in mid-January unless House and Senate budget conferees come up with an alternative by Dec. 12, their self-set deadline.

Inhofe said he is introducing an amendment that would mitigate sequestration’s impact by delaying some cuts for several years.

“My amendment does not fix sequestration. … However, the damage being done to our military is so egregious and reckless under the current sequester mechanism that I have no choice but to take this step to avoid an even greater readiness catastrophe that would seriously damage our national security,” he said.

The NDAA, which authorizes military pay and benefits as well as some policies, has passed the Senate Armed Services Committee as well as the full House.

The 2014 NDAA authorizes a 1 percent pay raise for all members of the uniformed services, consistent with President Barack Obama’s budget request. It also authorizes active duty end strengths of 520,000 for the Army, 323,600 for the Navy, 190,200 for the Marine Corps and 327,600 for the Air Force.

Earlier Tuesday, Senate Majority Leader Harry Reid, D-Nev., said the bill reauthorizes dozens of special pay rates and bonuses, such as bonus payments for servicemembers who see combat or are stationed overseas. The bill also contains provisions changing how prisoners at Guantanamo Bay can be transferred – yet another controversial amendment that makes it less likely for a final vote by the end of the week.