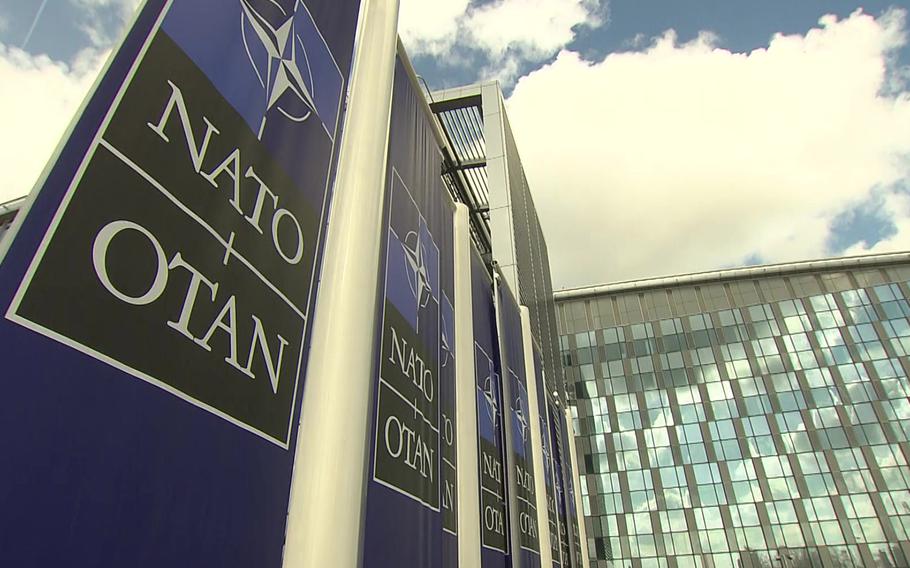 Sen. Marco Rubio, R-Fla., said Thursday, Aug. 30, 2018, that he is drafting a resolution to support a plan to name the new NATO headquarters in Brussels for the late Sen. John McCain. (NATO Channel)

WASHINGTON — Sen. Marco Rubio, R-Fla., said Thursday that he is drafting a resolution to support a plan to name the new NATO headquarters for Sen. John McCain.

Rubio’s effort follows a series of tributes this week to honor the Arizona Republican who died Saturday from brain cancer. In recent days, a proposal also has been floated to name the Russell Senate Office Building in honor of McCain, who served in Congress for 35 years.

NATO had no greater supporter than McCain, said Rubio, who called on the alliance, which is based in Brussels, to support the resolution.

“I am drafting a Senate Resolution supporting the naming of new #NATO HQ after him,” Rubio tweeted Thursday. “As McCain loved to say when asked why he held a certain position, ‘it is the right thing to do.’”

The idea is among several to ensure McCain is remembered for his influence on international affairs, domestic security and the military. McCain, a 31-year senator and former Vietnam War prisoner of war, died at 81 after a 13-month battle with glioblastoma, an aggressive form of brain cancer. He would have turned 82 Wednesday.

A service was held Thursday at the McCain family’s longtime North Phoenix Baptist Church with a line of state and national dignitaries slated to speak, including former Vice President Joe Biden, in addition to relatives and dozens of congressional members who will attend. Several Arizona figures will also speak at the service, including Arizona Cardinals player and McCain friend Larry Fitzgerald.

This followed a lying in state ceremony at the Arizona State Capitol on Wednesday for the former Navy pilot and presidential nominee.

“John McCain believed in America. He believed in its people, its values and its institutions. He said he came to this realization during his time as a POW in Vietnam. ‘I fell in love with my country,’ he said, ‘when I was a prisoner in someone else’s,’” former Sen. Jon Kyl, R-Ariz., recalled at the ceremony. “As a result, he dedicated his life to serve his country. When he saw challenges to its institutions or values, he fought to protect them.”

On Friday, McCain will lie in state at the U.S. Capitol, which will be open to the public in the afternoon and evening. It will be followed by a funeral at the Washington National Cathedral, where former Presidents George W. Bush and Barack Obama are slated to speak. McCain will be buried at the U.S. Naval Academy cemetery next to his late, longtime friend Navy Adm. Charles Larson.

Senate Minority Leader Chuck Schumer, D-N.Y., suggested earlier this week that the Russell Senate Office Building should be renamed for McCain, where he had an office. The building is now named for an influential Georgia Democrat, the late Sen. Richard Russell Jr., who was also supporter of racial segregation.

“As you go through life, you meet few truly great people. John McCain was one of them. His dedication to his country and the military were unsurpassed, and maybe most of all, he was a truth teller -- never afraid to speak truth to power in an era where that has become all too rare. The Senate, the United States, and the world are lesser places without John McCain,” Schumer said Saturday in a statement shortly after McCain’s death was announced. “Nothing will overcome the loss of Senator McCain, but so that generations remember him I will be introducing a resolution to rename the Russell building after him.”

However, the idea to rename the Senate building has already hit a snag among key Republicans as Senate Majority Leader Mitch McConnell, R-Ky., said more time was needed to consider a proper tribute.

“I’d like to put together an official group that can collaborate and bring together ideas from current members, former colleagues, and friends. It will be bipartisan -- as only befits John’s legacy,” McConnell said Tuesday from the Senate floor. “And come to think of it, we should probably call it not a committee, but a ‘gang.’ So I’m glad we’ll be able to form this gang to ensure that a suitable, lasting tribute becomes a reality.”

That day, Tom Tugendhat, a member of the United Kingdom’s Parliament and chairman of its foreign affairs select committee, announced he had written NATO Secretary-General Jens Stoltenberg calling for the new NATO headquarters in Brussels to be named after McCain. The Aug. 26 letter, which Tugendhat tweeted, said McCain deserved the honor.

He also added other former secretary-generals were supportive of the plan.

“Few have given as much to our alliance in combat, captivity, and Congress,” Tugendhat tweeted next to an image of the letter. “He reminds us what we should be.”