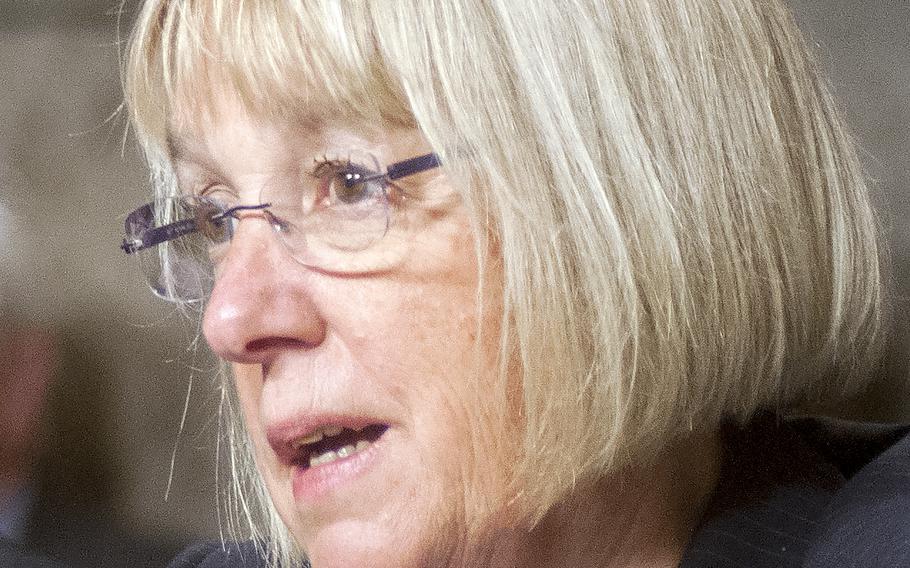 Sen. Patty Murray, D-Wash., attends a Senate hearing in July 2014. Regarding a Veterans Affairs ban on providing in vitro fertilization, Murray said Thursday, April 14, 2016, that an amendment she sponsored "fulfills the promise to those military families we are asking to sacrifice and serve, and gives them real peace of mind by ensuring that we cover these services in the event of these tragic injuries." (Carlos Bongioanni/Stars and Stripes)

WASHINGTON — Senators on Thursday renewed the call to lift a decades-old ban on the Department of Veterans Affairs providing in vitro fertilization to wounded veterans looking to have children.

The Senate Appropriations Committee voted in favor of legislation by Sen. Patty Murray, D-Wash., giving the department $88 million to provide reproductive treatments including IVF. It would put the VA on track with the Defense Department, which provides the benefits to active-duty troops.

The move comes a day after the House introduced a bill providing $20,000 payments to veterans with severely wounded reproductive organs.

It was an initial victory for Murray and others who have spent the past three years unsuccessfully trying to overturn the 1992 VA ban on IVF treatment, which was championed by conservatives in Congress concerned over discarded embryos. Complaints over the unfairness of the ban have risen as thousands of troops return home from Iraq and Afghanistan with severe genital or spinal injuries from improvised explosive device blasts.

“The amendment I am offering today fulfills the promise to those military families we are asking to sacrifice and serve, and gives them real peace of mind by ensuring that we cover these services in the event of these tragic injuries,” Murray said during the Senate committee hearing.

The ban is forcing wounded veterans to shoulder the costs of reproductive treatments if they attempt to start families. IVF costs involving wounded men can average more than $10,000 per pregnancy attempt and treatment with surrogates can range in price from $60,000 to $120,000.

Murray’s legislation doles out the $88 million to the VA over two years.

“The fact is assisted reproductive technology like IVF is medically sound, it is widely used … DOD has been providing this care to servicemembers for some time now,” Murray said during the committee hearing.

Veterans have been left without fertility and reproductive coverage even as the Defense Department unveiled new benefits in January allowing active-duty troops to freeze sperm and eggs before deploying.

Committee members overwhelmingly supported the legislation with a 23-7 vote.

The group Paralyzed Veterans of America, which represents veterans who struggle to have children, also said Thursday that it supports Murray’s legislation.

It is now part of an annual VA budget bill that faces the scrutiny of the full Senate and a long legislative trek to potentially becoming law later this year.

Similar legislative effort by Murray in past years have failed, leading a prominent Republican in the House to propose a different approach this week to the issue.

Rep. Jeff Miller, R-Fla., the chairman of the Committee on Veterans’ Affairs, proposed the $20,000 lump-sum payments to veterans who have lost the use of their reproductive organs through traumatic injury or paralysis.

It could assist with adoption or foster care costs, Miller said while unveiling the bill Wednesday.

The bill does not address the IVF ban directly, but the money could be used to purchase private fertility treatments outside of the VA – and potentially sidestep the long-running political fight with conservatives.

“Veterans would be able to use this money however they see fit and to best meet the needs of the veteran’s specific circumstances,” Miller said.