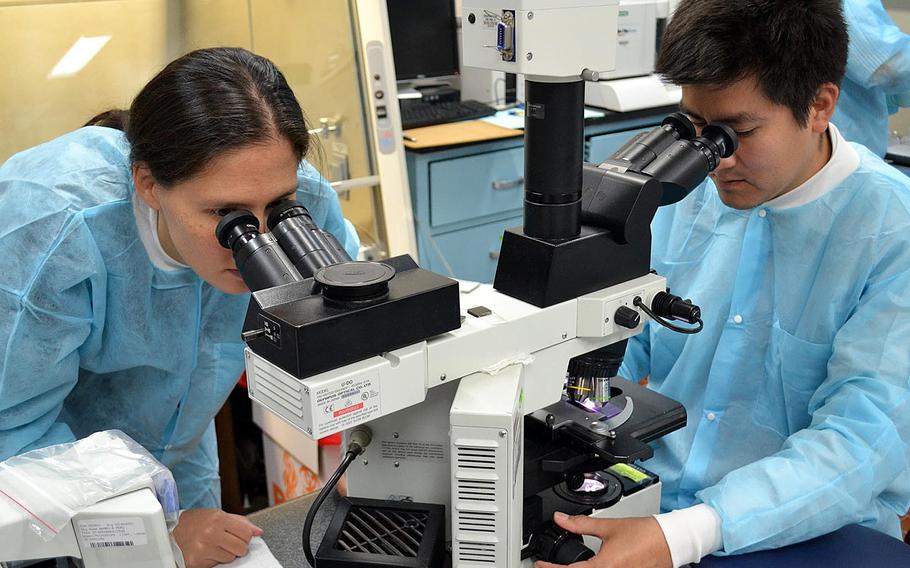 Samples are analyzed at U.S. Naval Medical Research Unit 6 in Callao, Peru, on Jan. 17, 2012. Senators clashed on Tuesday, June 7, 2016, over tighter restrictions on more than $1 billion worth of medical research conducted through the Defense Department. (U.S. Navy)

WASHINGTON — The Senate has rejected tighter restrictions on more than $1 billion worth of medical research conducted through the Defense Department.

Sen. John McCain, R-Ariz., proposed making it more difficult for Congress to sponsor research through the department on general health problems such as breast cancer, epilepsy and tick-borne diseases, saying the military funding should go only to battlefield medicine. But Sen. Dick Durbin, D-Ill., Disabled American Veterans and other advocacy groups said the research has led to life-saving breakthroughs for military families and veterans as well as the general public.

A majority of senators voted late Tuesday afternoon against McCain’s plan during debate on the National Defense Authorization Act, an annual military policy and budget bill.

The debate came as lawmakers scrape for more money in the face of spending caps imposed by fiscal conservatives in Congress.

“We are trying to do everything we can to take every defense dollar and help the men and women who are serving in conflicts taking place throughout the world,” McCain said during a Senate floor speech defending his proposal.

McCain blamed politicians and lobbyists for regularly packing the defense budget with medical research dollars that are unrelated to the military mission or service-specific health problems.

The money doled out for the Congressionally Directed Medical Research Program is spent in a wide array of medical areas and has grown from $25 million in 1992 to more than $1 billion today, according to McCain, who is chairman of the Senate Armed Services Committee.

His proposal would have required the defense secretary to certify that each research grant will be used directly for battlefield medical research or research on treating conditions common among servicemembers and veterans.

The restrictions on research caused an uproar among advocates and grant recipients. McCain said his office phones were ringing off the hook with concerned calls and conceded even before the vote that his measure would likely be defeated.

Durbin held a joint news conference Tuesday morning with DAV and charged McCain with trying to eliminate the medical research.

“What Chairman McCain is trying to do is strangle medical research in the Department of Defense with red tape,” Durbin said. “That’s what it is all about, to make it more expensive and take longer for those who want to apply for these programs and want to do critical research that is necessary.”

Durbin said research into areas of epilepsy could benefit the many servicemembers who suffered traumatic brain injuries.

Meanwhile, wider research has helped military families who suffer from common but severe illnesses. The DOD research program pumped $3 billion into breast cancer research during the past 24 years and led to the development of a life-saving cancer drug, Durbin said.

Adrian Atizado, DAV assistant national legislative director, said Gulf War Illness research initiated by Congress in 2006 could help 600 veterans who were exposed to old chemical weapons during a disposal operation, and that wider research on multiple sclerosis and Lou Gehrig’s disease could also benefit the military because of the prevalence of the diseases among servicemembers and veterans.

“This research program is a peer-reviewed and competitive grant process led by scientists, clinicians and disease experts, and ensures that taxpayers’ dollars support only the most promising military-relevant research,” Atizado said.