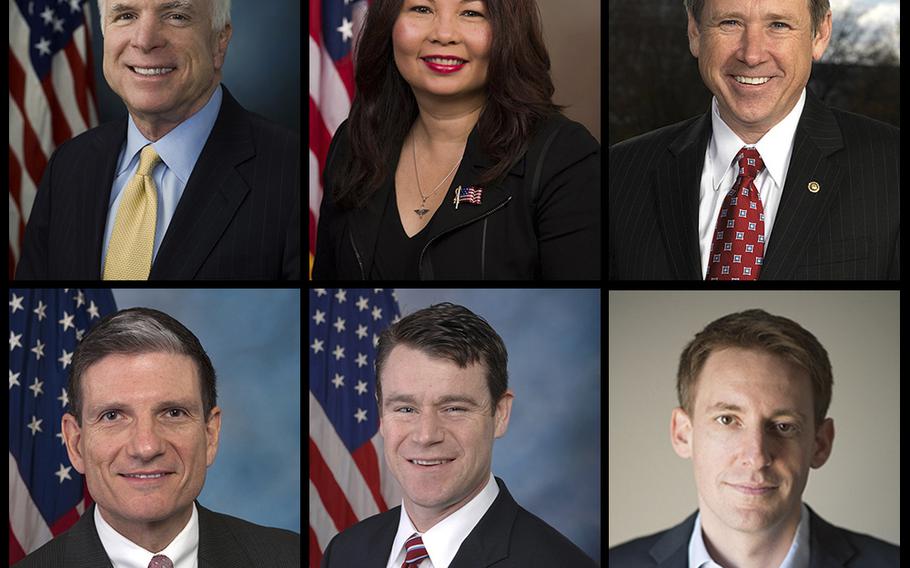 WASHINGTON — Republicans won victories Tuesday night allowing them to retain control of the Senate but the election was a mixed bag for veteran and military candidates in some of the chamber’s key races.

But Republican Congressman and Army Brig. Gen. Joe Heck, who was running in Nevada, and Democrat Jason Kander, an Army veteran running in Missouri, both lost in highly competitive races to candidates with no military experience.

Overall, the election outcome means McCain and some new Senate voices such as Young will maintain a slightly stronger hand in pushing defense policy – including an ongoing effort to hike military spending – in the Senate while having support from a House that also stayed firmly in GOP control. But losses by Heck and Kander also come as the number of veteran lawmakers in Congress sink to historic lows.

“The one message that came through loud and clear in this election is that Americans want progress now,” McCain said in a released victory statement. “They want progress now to secure their families and America’s interests from the dangerous threats we face overseas.”

McCain, who is a key player in crafting military policy, said it was a “difficult national election and not always an uplifting one.” But he said he was ready to extend an open hand of cooperation to President-elect Donald Trump, who won a sweeping victory that stunned pollsters after one of the most divisive and unusual U.S. elections in recent history.

One of the most stunning moments of the election came last year when Trump questioned whether McCain was a war hero because he was captured and held as a prisoner of war in Vietnam. McCain withdrew support for Trump in October after a video surfaced showing the president-elect bragging about making unwanted sexual advances on women.

Meanwhile, Duckworth, who lost both legs in an Iraq helicopter crash, followed through with a win in Illinois after being favored to win against a Kirk campaign that struggled to connect with voters. Just two weeks before the election, Kirk publicly apologized after he questioned Duckworth’s Thai heritage and her family’s long history of military service, which stretches back to the Revolutionary War.

“While this campaign has drawn to an end, the real work of securing the blessings of liberty for ourselves and for all of our children and grandchildren continues,” said Duckworth, who is a member of the House Armed Services Committee.

In Indiana, Young had been considered an underdog but in the final weeks of the election surged past Evan Bayh, who was trying to return to the Senate after leaving in 2011.

Young, a rifle platoon commander and intelligence officer, campaigned as a fiscal conservative who supports many of House Speaker Paul Ryan’s social program reforms as well as a repeal of the Affordable Care Act, known commonly as Obamacare.

In Nevada, Heck, a physician who is still serving in the Army Reserve, slugged it out in one of the most hotly contested and competitive Senate races.

He ran a tight race until the end against Catherine Cortez Masto, who is a Democrat and former state attorney general but has not served in the military. Heck had difficulties with Trump and the president-elect’s campaign scandals that might have dragged on his own campaign.

Heck was heckled at a campaign rally after withdrawing support for Trump in October when an Access Hollywood video was made public. The video from the television show caught Trump boasting about grabbing women’s genitals and later at least 12 women claimed he touched them inappropriately.

In the House, Heck is chairman of an Armed Services Committee panel focused on military personnel and has worked on reform of military health care and the commissary system. Cortez Masto, who brings little experience with defense policy, will be the first Latina in the Senate.

The Democrats did suffer a major defeat in Missouri, where 35-year-old Kander seemed poised to unseat incumbent Sen. Roy Blunt, a Republican.

Outside money poured into the state and a campaign video showing Kander re-assembling an assault rifle while blindfolded highlighted his Army experience and went viral online.

But Blunt, who served for years in the House before moving to the Senate, defeated the young Democrat on election night with 49 percent of the vote.