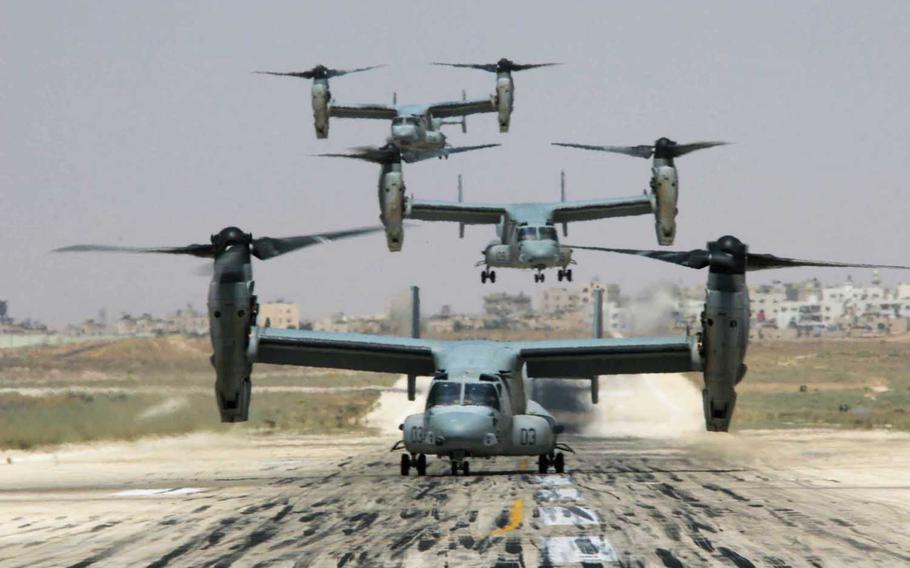 RAF MILDENHALL, England — A Senate committee report has recommended against building infrastructure at RAF Mildenhall for the base’s newly arrived Ospreys and has questioned the rationale for placing the aircraft in the United Kingdom.

The Defense Department had requested $67 million for airfield pavements, an operations facility and other construction for the 352nd Special Operations Group at Mildenhall, which started receiving the Ospreys earlier this year as part of a massive expansion and overhaul of the group.

The ongoing expansion includes about 900 new servicemembers and dependents, as well as the MC-130J Commando II aircraft as replacements for its aging fleet of MC-130P Combat Shadows.

But, much of the work being performed by the 352nd SOG is occurring in places in northern Africa, and Naval Air Station Sigonella, Italy is closer, according to the Senate Appropriate Committee’s report on 2014 military construction.

“Sigonella has become a key launch pad for missions related to Libya, and given the ongoing turmoil in that nation as well as the emergence of terrorist training activities in northern Africa, … Special Operations Command should re-evaluate the decision to beddown the SOF CV-22 mission at Mildenhall,” the report stated.

Sigonella has recently become home to Marines focused on missions in Africa. A Marine Air Ground Task Force arrived in 2012 that conducts counterterrorism training for local forces in Africa. Earlier this year, the base temporarily received a small unit from a Marine rapid-reaction force as the situation in Libya deteriorated.

Plus, the DOD has already spent money to locate the Ospreys in Mildenhall. An official with the 352nd said the new Osprey simulator and building that houses it cost approximately $18 million.

Mildenhall has focused a great deal on Africa in recent years despite its distance. The 100th Air Refueling Wing deployed a unit to Spain in January to provide midair refueling to planes over Mali and has provided support for operations in Libya. Planes from the 352nd evacuated about 60 people from Chad in 2008 after rebels attacked the country’s capital.