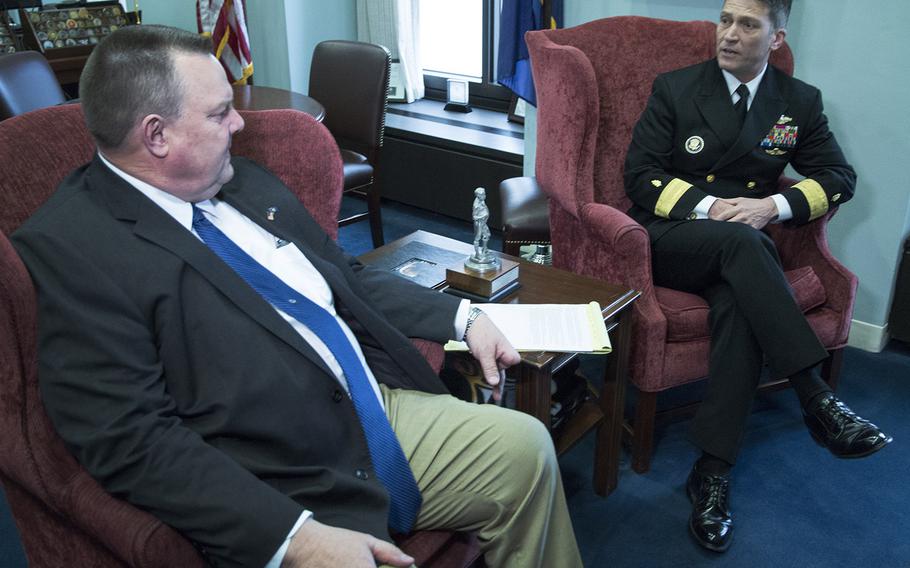 WASHINGTON — Senate lawmakers postponed the confirmation hearing for Rear Adm. Ronny Jackson, the nominee for Department of Veterans Affairs secretary, amid an investigation into allegations of his conduct as the White House physician.

Jackson was scheduled to face members of the Senate Veterans’ Affairs Committee on Wednesday afternoon, but media reports that surfaced Monday night cast doubt on whether the hearing would take place as planned. Jackson faces allegations of creating a hostile work environment as White House physician, overprescribing medications and drinking on the job, the New York Times reported.

Leaders of the Senate committee are taking the allegations seriously.

In a letter to President Donald Trump on Tuesday, Sens. Johnny Isakson, R-Ga., and Jon Tester, D-Mont., asked the White House to turn over a litany of information about Jackson. Their request includes any communication between the Defense Department and Office of Inspector General “regarding allegations or incidents” involving Jackson since 2006 – the year he became the White House physician.

“We take very seriously our constitutional duty to thoroughly and carefully vet each nominee sent to the Senate for confirmation,” Isakson, the committee chairman, and Tester, the committee’s ranking Democrat, wrote in a joint statement. “We will continue looking into these serious allegations and have requested additional information from the White House to enable the committee to conduct a full review.”

The committee has not set a new date for the hearing.

Trump announced via Twitter on March 28 that he intended to nominate Jackson to lead the VA – an agency with more than 375,000 employees and a nearly $200 billion budget. He was an unexpected choice and a relative unknown among the veterans community.

The White House stood behind Jackson’s nomination as critics expressed concerns about his lack of management experience. On Tuesday morning, they delivered another message of support for him.

“Admiral Jackson has been on the front lines of deadly combat and saved the lives of many others in service to this country,” said Hogan Gidley, deputy White House press secretary. “He’s served as the physician to three presidents – Republican and Democrat – and been praised by them all. Admiral Jackson’s record of strong, decisive leadership is exactly what’s needed at the VA to ensure our veterans receive the benefits they deserve.”

During the past week, Jackson met with lawmakers and veterans organizations in Washington, but many of them were looking to Wednesday’s confirmation hearing to learn more about the nominee’s experience and in what direction he planned to lead the VA.

The atmosphere going into the confirmation process stood in contrast to that of former VA Secretary David Shulkin, who had worked in VA leadership for more than a year before being nominated for the position.

“With Shulkin, we all knew he would be confirmed for sure,” American Legion Executive Director Verna Jones said before the hearing was postponed. “But this one is a little bit different in the respect that we just don’t know. Most of us don’t know who he is.”

Jackson answered a written questionnaire that he turned over to senators ahead of the scheduled hearing, along with financial disclosures and an ethics agreement.

In the questionnaire, he listed only two interviews that he’s given – both to local news outlets in Texas, his home state. Most people were introduced to Jackson in January, when he told reporters at the White House about Trump’s “excellent health.”

Before the allegations of his workplace conduct emerged, Jackson was already expected to face tough questioning at the hearing. Veterans advocates wanted to learn about his plans for private-sector medical care and a host of other challenges within the massive bureaucracy.

“We’d like to know what his understanding is of the disability programs, appeals modernization, the new GI Bill – all kinds of things,” said Garry Augustine, executive director of Disabled American Veterans. “He’s kind of a blank slate to us, and we’d just like to know if he’s done his homework and how much he knows about the whole system.”

As senators dig into Jackson’s past and the confirmation process is prolonged, Robert Wilkie remains as the VA acting secretary. Wilkie, the Defense Department undersecretary for personnel and readiness, has been leading the agency since Shulkin was fired March 28.

Questions have been raised about whether Trump had the legal authority to bypass VA Deputy Secretary Tom Bowman and designate Wilkie as the acting VA secretary.

In reaction to the news Tuesday, Rep. Mark Takano, D-Calif., criticized Trump over Twitter, stating his administration has failed to provide stability and continuity in leadership at the VA.

“The constant chaos is a disservice to the millions of veterans who rely on the VA for care,” Takano wrote.