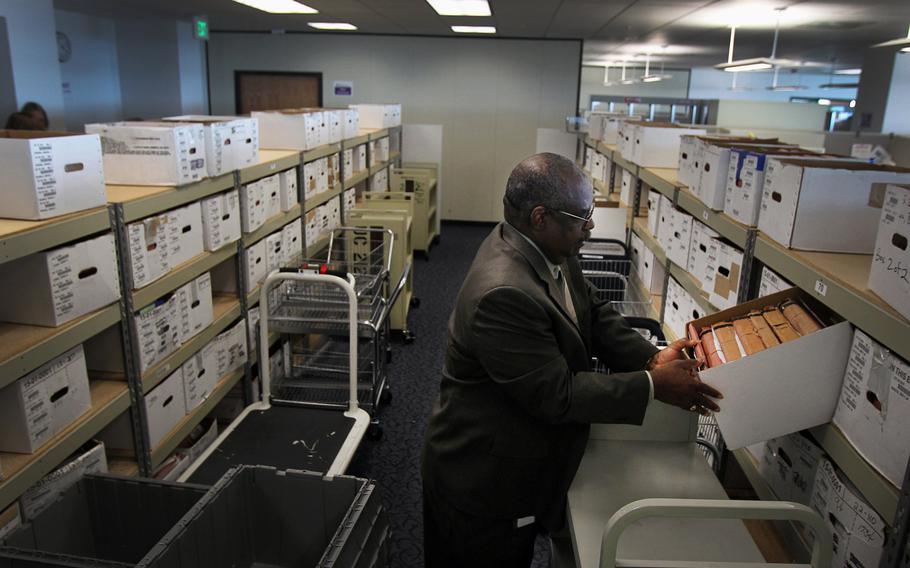 Douglas Bragg, the director of the Veterans Benefits Administration office in Oakland, Calif., looks into one of the many boxes that contain the cases of veterans with pending claims, April 18, 2013. (Rick Loomis, Los Angeles Times/MCT)

WASHINGTON — The Senate overwhelmingly passed a compromise bill Wednesday aimed at reforming the nation’s troubled veteran health care system, the latest move by lawmakers to fast-track fixes in the wake of a scheduling scandal that has been blamed for patient deaths.

The legislation, sponsored by Sens. John McCain and Bernie Sanders, expands access to private treatment, increases the number of VA doctors and hospitals, and gives the department more power to fire executives.

“If it is not an emergency that we have neglected the brave men and woman that have served this country, then I don’t know what an emergency is,” said McCain, R-Ariz., during a Senate floor speech Wednesday.

The Senate passed the bill 93-2. Similar measures have already been passed with overwhelming support in the House and now the two chambers will hold a conference to hammer out a final VA proposal to send to President Barack Obama, which could happen as early as next week.

The White House’s Office of Management and Budget released a statement following the Senate saying it strongly supports the legislation.

More than 57,000 veterans have been waiting more than three months for VA health care at 731 hospitals and clinics across the country, according to a department audit released Monday.

The VA attempted to conceal the wait times by falsifying records at many facilities, the VA’s inspector general reported last month.

The department itself said this week that about 70 percent of its health care facilities used off-the-books patient waiting lists at least once, and management pressured staff in some cases to manipulate appointments to make waits appear shorter.

The VA IG and Department of Justice are weighing criminal charges, and The Associated Press reported Wednesday that the FBI is also investigating.

McCain and Sanders, I-Vt., said the compromise bill passed Wednesday is not a fix-all for the VA’s deep problems.

“It is not the end of the beginning, but it is a beginning,” McCain said.

Here is what the bill would do:

Vets who cannot get appointments for timely care and live more than 40 miles from the nearest VA facility may opt for private care. New VA secretary power to fire senior executives without pay during a two-week appeal period. $500 million in unobligated VA funds for hiring doctors and nurses. Leases for 26 new major medical facilities in 18 states. Sexual assault treatment would be expanded. Commissions created to review antiquated VA computer systems and construction programs. On Tuesday, the House passed a bill sponsored by Rep. Jeff Miller, R-Fla., allowing expanded access to veterans who live more than 40 miles from VA facilities. That distance was taken from the standard hospital service area used by military health care provider Tricare, according McCain’s staff.

That chamber had earlier approved a bill allowing the VA secretary wider power to fire executives, saying the measure is needed to clear out and an entrenched bureaucracy responsible for the scheduling abuses.