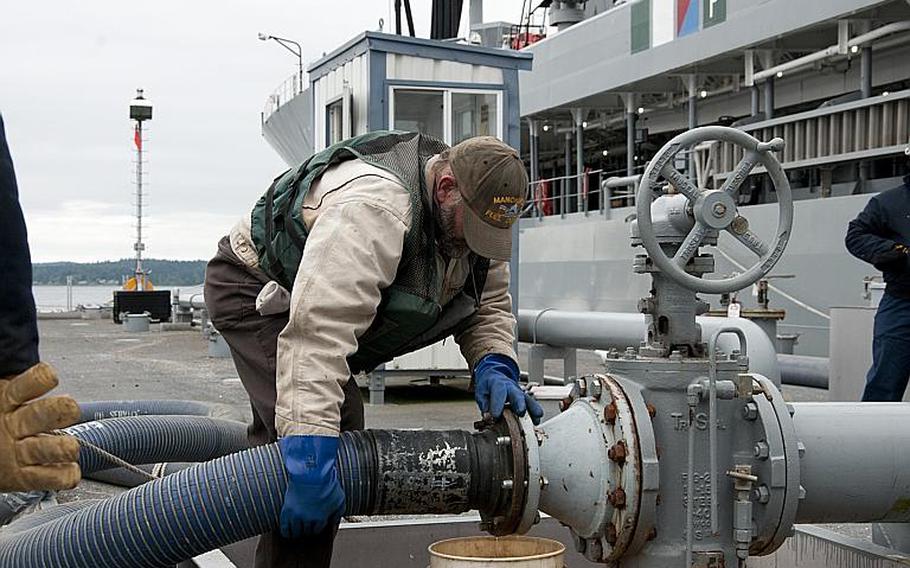 David Riggs, from Fleet Logistic Center Puget Sound, Wash., secures a fueling hose during a biofuel transfer to the USNS Henry J. Kaiser on July 13, 2012. The ship took on 900,000 gallons of a 50/50 blend of biofuels and petroleum-based fuel, and is now fueling ships participating in the Great Green Fleet demonstration during the Rim of the Pacific exercise in Hawaii. (Chris Brown/Courtesy of U.S. Navy)

The Senate passed an amendment to the 2013 defense authorization bill Thursday that allows the military to spend money on biofuel refinery construction, the second measure approved this week that removes restrictions on the Defense Department&rsquo;s long-term energy plans.

Earlier this year, congressional committees, unhappy about the high costs of biofuels, added severe spending restrictions on the military to the annual defense bill.

The amendment&rsquo;s passage means that, if the current bill becomes law, the Pentagon can move forward on a $510 million agreement with the Energy and Agriculture Departments to retrofit and construct advanced biofuel refineries.

During Senate floor debate Thursday, Hagan reiterated the chief argument for biofuels made by Secretary for the Navy Ray Mabus and other supporters &ndash; oil price and supply shocks endanger the military&rsquo;s ability to respond globally.

&ldquo;The dependency on a single source of energy leaves our military&rsquo;s readiness at risk,&rdquo; Hagan said.

The Navy plans to power half of its fleet with alternative fuels by 2020. The Air Force also wants to use more biofuels to power jets and other systems.

The language stricken from the defense bill would have prevented the Pentagon from entering into biofuel refinery contracts and required individual agreements to be passed as laws. Current Navy and Air Force plans require an additional 770 million gallons of biofuel manufacturing capacity, according to a recent report by industry advocacy group E2.

Opponents of large-scale military biofuel spending maintain that the fuels, which cost considerably more than oil or gas, can&rsquo;t be justified as the nation looks to cut the budget deficit. They also maintain that the hundreds of millions of dollars projected to be spent on biofuels in upcoming years take money away from operational readiness.

On Wednesday, the Senate struck language from the defense bill that would have prevented the military from buying bulk alternative fuels costing more than conventional fuel.