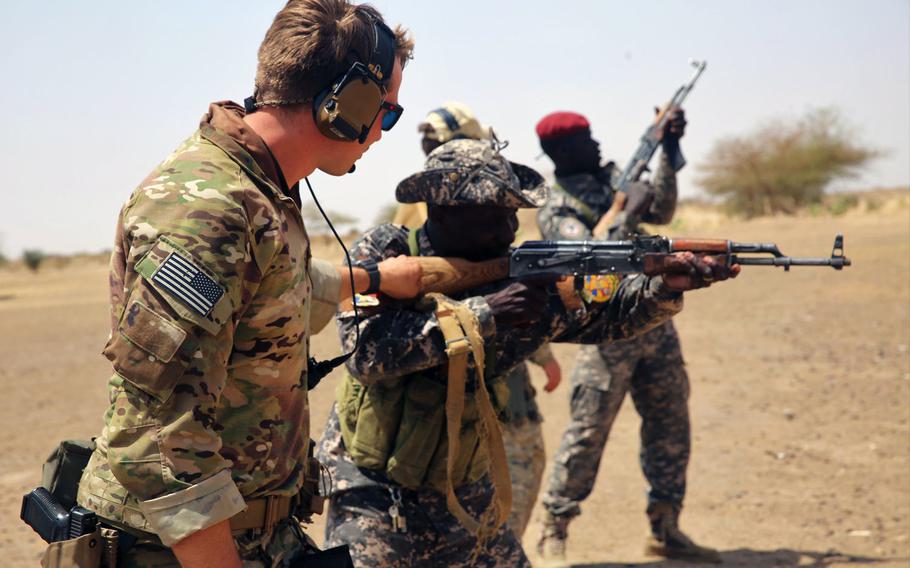 Chadian Special Forces soldiers receive basic rifle marksmanship and sniper training at a live-fire range March 6, 2017, in Massaguet, Chad as part of Flintlock 17. A U.S. senator is pushing to get the Army to assign one of the service's new Security Forces Assistance Brigades to AFRICOM, which doesn't have any assigned forces. (Derek Hamilton/U.S. Army)

STUTTGART, Germany — A key U.S. senator is pressing the Army to set aside one of its new Security Forces Assistant Brigades for missions in Africa, which are now being carried out by a mix of rotating units.

Sen. Jim Inhofe, R-Okla., a senior member of the Senate Armed Services Committee, said in a letter Monday to Army leadership that U.S. Africa Command would benefit from having a more reliable unit to tap for its expanding advisory mission on the continent.

“As you know, AFRICOM does not have any assigned forces, but must compete for allocated forces within the Department of Defense’s global force management process,” Inhofe wrote to Army Secretary Mark Esper.

Earlier this year, the Army stood up its first SFAB, which is now advising Afghan forces. The advisory brigades, manned by more experienced enlisted troops and hand-picked officers, are intended to provide relief for special operations forces as well as regular Army units carrying out training and advisory missions. Over time, the SFABs could free up the Army’s 58 brigade combat teams to concentrate on building their own combat readiness rather than the advisory missions.

The Army already is looking at Africa, along with Eastern Europe and South Korea, as potential destinations for new SFABs. By the end of 2019, the Army wants five such brigades, which would eventually carry the bulk of the Pentagon’s train, advise and assist missions throughout the world.

“There will always be a need to help build allied or partnered forces, so (the SFABs) can take on that mission. Which is far better than us doing it with our combat brigades,” Esper told Stars and Stripes last month.

While AFRICOM has no assigned forces of its own, it has been allocated personnel from across the military. There are roughly 7,000 U.S. military personnel operating in Africa at any given time.

The command also shares assets with U.S. European Command, which include a Marine task force focused on crisis response missions in Africa. Much of AFRICOM’s more sensitive missions are carried out by special operations forces in places such as Somalia and Niger, where troops engage in occasional combat. It’s unlikely the SFABs would move into those missions, which also involve the training of indigenous special operations units. The Army has said SFABs are to focus on regular ground forces.

However, for the bulk of AFRICOM training that focuses on partnering with regular army units, the SFABS would be good fit, Inhofe said.

“The new SFABs are designed specifically for this type of mission and are manned appropriately,” Inhofe wrote. “Assigning an SFAB would also reduce the requirements of allocating a BCT and allowing it to focus on its training and maintaining the highest levels of readiness to meet ... operational plans.”