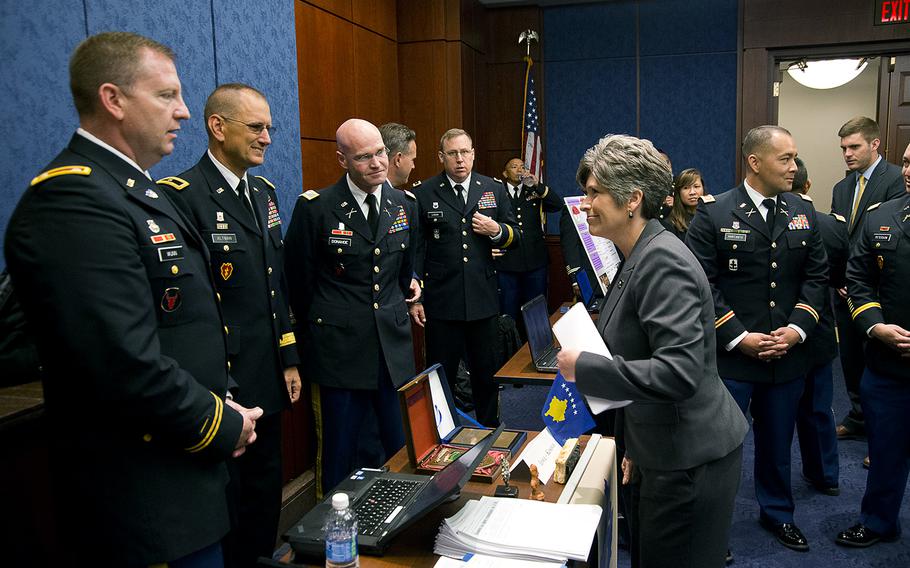 WASHINGTON — Divisive Senate politics on Thursday stalled funding for troops and veterans, and threw the defense budget into uncertainty for the second year in a row.

Democrats continued their filibuster of spending bills for defense and the Department of Veterans Affairs after Republicans tweaked unrelated language on Planned Parenthood and Confederate flag displays – moves certain to raise the ire of lawmakers on the left.

The impasse underscores the partisan rancor in Congress and means lawmakers are unlikely to pass a defense and VA budget in time for the start of the new fiscal year in October. Instead, they will leave Washington for a seven-week summer recess and be faced with passing a last-minute, stop-gap budget measure when they return.

Each side blamed the other for playing political games. Republican senators used the impasse to hammer Democrats with claims of abandoning and endangering deployed servicemembers.

“You don’t care about their safety, minority leader, while they selflessly serve for ours,” Sen. Joni Ernst, R-Iowa, told the top Democrat in the Senate, Harry Reid. “You don’t care that their families are counting on them to come home safely.”

Sen. Mitch McConnell, R-Ky., the majority leader, said the Democrats will be faced with answering questions during the long summer recess – and presidential election campaign -- about filibustering the budget bills and $1.1 billion in attached funding to fight the Zika virus. The disease has been linked to severe birth defects and is spreading in the United States.

The VA funding bill initially passed with the support of Democrats in the Senate.

But when the House and Senate appointed a committee to smooth out differences for a final bill to send to the White House, Republicans made a variety of changes, including the Zika rider, that rankled Democrats.

Minority Leader Sen. Harry Reid, D-Nev., said Thursday that the changes were made to “take care of right-wing crazies” and charged Republicans with being deceitful about what the bill would do.

“How could anybody with a conscience vote for that,” Reid said. “We are not going to.”

Similar wrangling last summer led to legislative disarray, including a rare presidential veto of the defense budget and a scramble on Capitol Hill to pass an omnibus federal spending bill in December.

Congress had pledged to avoid political fights this year that endanger the budget and passed a law in November that was supposed to keep the peace for until 2018. But the deal splintered and has now given way to partisan divisions that have plagued Congress.

In a sign of how broken the budget deal is, Reid praised the Democrats’ filibustering and brinkmanship last year that brought the budget process to a grinding halt – and said the party is using it again by blocking the military funding bill.

He said the tactic could win his party a better deal and more money for domestic programs, particularly national security operations such as the FBI and Department of Homeland Security.