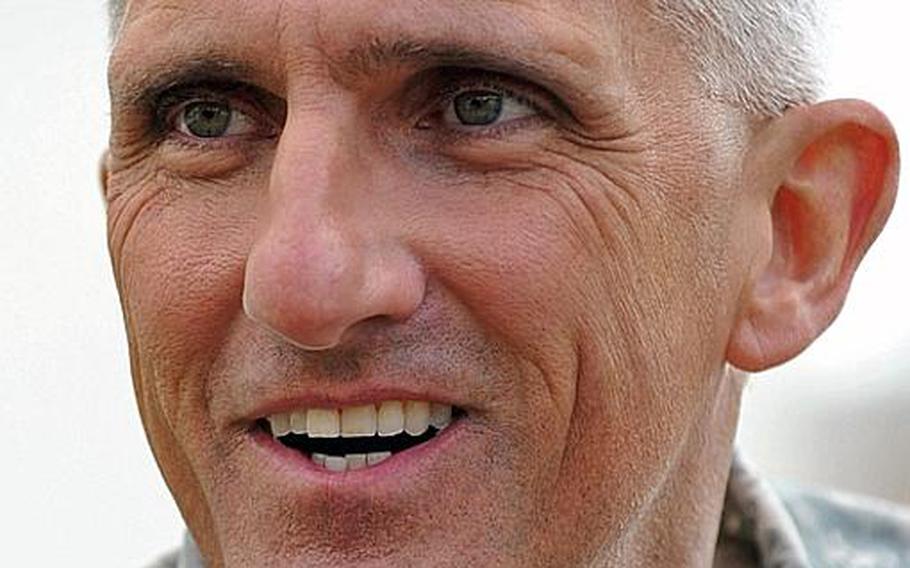 HEIDELBERG, Germany &mdash; Lt. Gen. Mark Hertling was confirmed Thursday by the U.S. Senate to become the next commander of U.S. Army Europe.

His date to assume the USAREUR command has not been set.

Hertling, 57, will be the first three-star general to command U.S. Army Europe &mdash; excluding temporary commands of a few months &mdash; since the 1950s.

The command, the largest U.S. formation in Europe, had been headed by four-star generals. But the force has been reduced by at least one-third in the past five years, with 40,000 soldiers remaining assigned to it. And last year, Defense Secretary Robert Gates vowed to cut the number of top generals and civilians within the Defense Department by 5 percent, a small part of a wide-ranging effort for efficiency.

The European service-component commands were viewed as likely commands to be restructured.

Hertling, a former competitive swimmer with a master&rsquo;s degree in exercise physiology, has made news recently for his innovations in combat training and testing in his post as deputy commander for Initial Military Training at the U.S. Army Training and Doctrine Command. He helped devise training to better prepare a new generation of soldiers for combat and is currently testing the first new tests for physical and combat fitness in 30 years.

Hertling has deployed twice to Iraq, and has had numerous assignments within USAREUR, beginning in 1975, when he was a second lieutenant with the 64th Armor, 3rd Infantry Division in Schweinfurt, according to USAREUR public affairs.

He had extensive experience in the 1st Armored Division: He was deputy assistant chief of staff for operations in Ansbach from 1988 to 1990; operations officer for 1st Squadron, 1st Cavalry while deployed to Saudi Arabia during the Persian Gulf War in 1990 to 1991; and assistant division commander (support) in Iraq from September 2003 to August 2004. The next year, Hertling commanded the Joint Multinational Training Command in Grafenw&ouml;hr, until August 2005.

From May 2007 until May 2009, Hertling was commander of the 1st Armored Division. He spent most of that time in northern Iraq.

Hertling succeeds Gen. Carter Ham, who took command of USAREUR in August 2008. Ham has been confirmed by the Senate as the next commander of U.S. Africa Command.