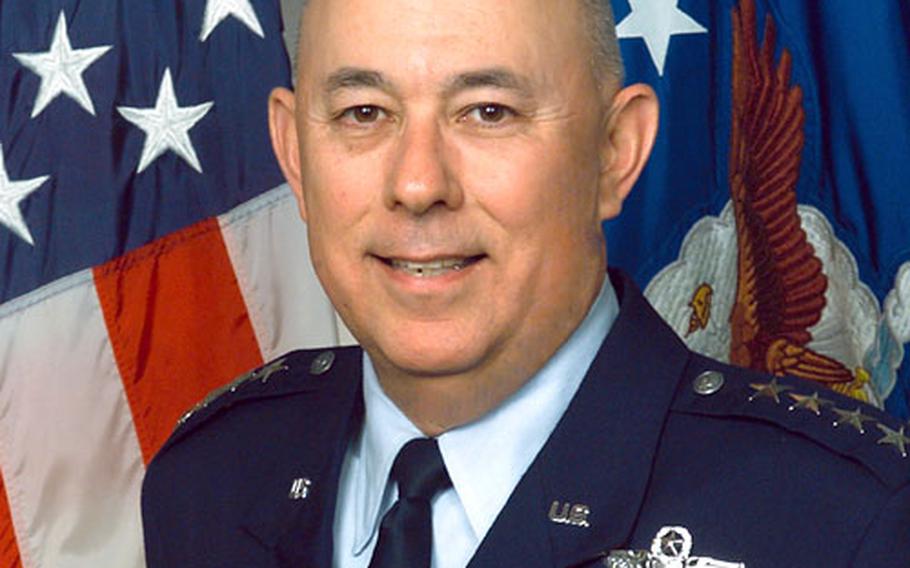 ARLINGTON, Va. &#8212; Gen. T. Michael Moseley, an F-15 fighter pilot who commanded the air war in both Iraq and Afghanistan, will be the Air Force&#8217;s next chief of staff, according to a Senate confirmation vote that arrived right before the Fourth of July recess.

Moseley, who now serves Air Force vice chief of staff, will take the No. 1 post from Gen. John Jumper as soon as Jumper retires, but that date has not yet been announced, Air Force spokesman Capt. Aaron Burgstein told Stripes on Thursday. Moseley&#8217;s command experience includes the F-15 Division of the Air Force&#8217;s Fighter Weapons School at Nellis Air Force Base, Nev.; the 33rd Operations Group at Eglin Air Force Base, Fla.; and the 57th Wing, also at Nellis.

As head of the 9th Air Force and U.S. Central Command Air Forces, Moseley was the Combined Forces Air Component commander for operations Southern Watch, Enduring Freedom and Iraqi Freedom. Before Moseley got his thumbs-up from the full Senate, he faced questioning by the Senate Armed Services Committee during a June 29 confirmation hearing. The hearing also included Marine Gen. Peter Pace, who is now vice-chairman of the Joint Chiefs of Staff and has been nominated by the White House for the chairman&#8217;s post, and Adm. Edmund Giambastiani Jr., commander of United States Joint Forces Command, who has been nominated to replace Pace as vice-chairman. The full Senate confirmed Moseley&#8217;s promotion on June 30, but lawmakers declined to vote on Pace and Giambastiani&#8217;s appointments.