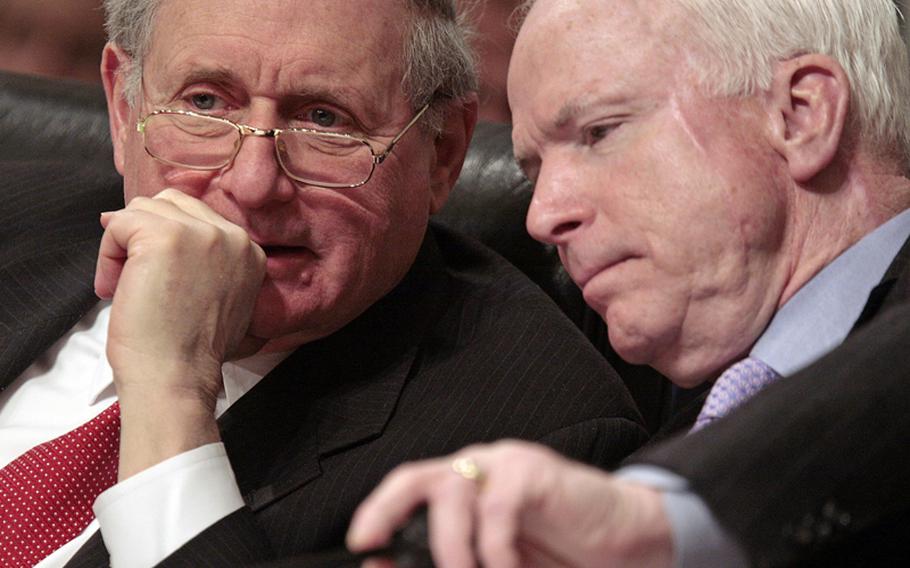 WASHINGTON - The Senate Armed Services Committee unveiled a $631 billion draft of the annual defense authorization bill Thursday, setting the stage for a spending showdown with House lawmakers pushing for a few billion more in military funding next year.

Last week, the House passed its version, authorizing an additional $4 billion in spending despite White House and Pentagon objections.

Committee chairman Carl Levin, D-Mich., said he is optimistic the full Senate will vote on the measure in June or July, but staffers don't expect a compromise bill to be finalized until after the November elections.

The Senate figures match the White House budget request, although Levin noted that the latest draft includes 150 changes in funding authorizations from the president's plan.

Among them is a plan to save about $5 billion by cutting civilian defense employees and defense contract spending by five percent over the next five years.

Committee ranking member Sen. John McCain, R-Ariz., said the idea is to match planned cuts in the military's end strength with comparable reductions on the civilian defense side. The Army is set to cut about 70,000 troops in coming years, and the Marines plan to cut 18,000.

The measure includes language requiring a Pentagon report detailing the potential effects of sequestration cuts - about $500 billion in automatic defense spending reductions set to go into effect early next year - and a provision halting foreign aid payments to Pakistan in response to their closing of supply routes to Afghanistan.

The measure would approve a 1.7 percent pay increase for troops next January, matching the increase proposed by the House and the White House. It echoes House objections to another round of base closures, despite military leaders' insistence that one is needed.

Senate committee members also voted to establish a military compensation and retirement modernization commission to review all active-duty and retirement pays. However, the bill specifies that any changes would not affect current servicemembers and retirees.

The committee also shelved a proposed increase in Tricare fees, as did the House objections, and overturned Pentagon plans to stop producing M1 Abrams tanks and retire a number of Air National Guard aircraft.

The Senate version does not include controversial provisions from the House version which call for construction of an East Coast missile defense site and a ban on same-sex weddings being performed at military facilities.

Democratic senators are expected to try to add an amendment updating the rules governing treatment of terrorism detainees and barring open-ended imprisonment of terrorism suspects when the measure comes before the full chamber.

Levin said the committee did not include any amendments related to speeding the withdrawal of U.S. troops from Afghanistan. A measure to immediately pull all U.S. forces out of the country failed on the House floor.