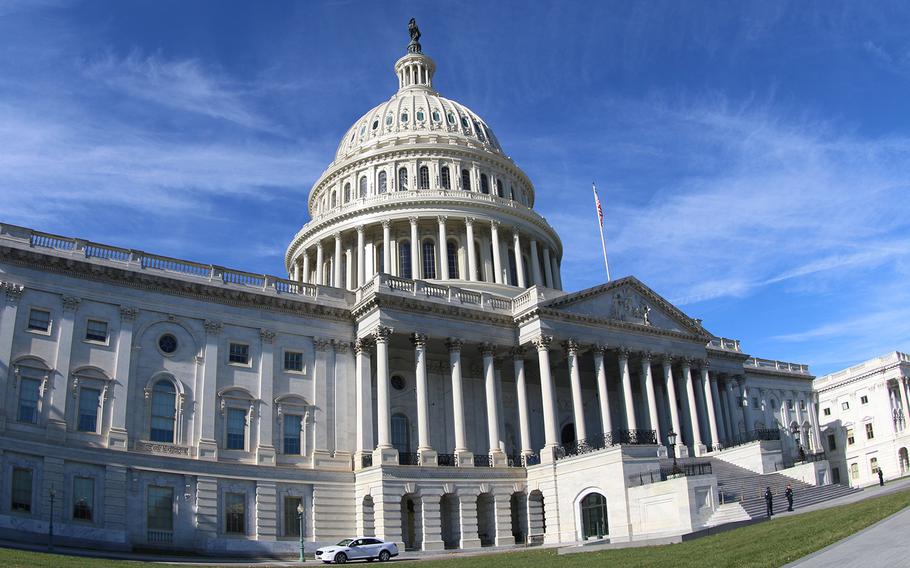 WASHINGTON — The Senate on Thursday approved a massive spending bill that would direct more than $670 billion toward a wave of Defense Department increases, including the largest boost to servicemembers’ pay in nearly a decade and new gains in the number of troops, equipment and weapons for the 2019 fiscal year.

The measure, which was part of a larger funding package of more than $850 billion, will fund priorities directed in the recently passed 2019 National Defense Authorization Act, which directs policy and spending plans for the Defense Department.

The Senate voted 85 to 7 to pass the legislation, with some lawmakers absent, including Sen. John McCain, R-Ariz., chairman of the Senate Armed Services Committee, who is battling brain cancer.

The legislation, H.R. 6157, now goes to a congressional conference committee to be reconciled with its House version before requiring votes in both chambers. If approved, the legislation goes to the president for his signature.

“The funds meet many of the requirements of our military commanders, equipping and training units to meet and overcome the most dangerous of emerging global threats,” Senate Majority Leader Mitch McConnell, R-Ky., said ahead of Thursday’s vote. “As ever, our obligation to this all-volunteer force is to provide adequate training, weaponry and skills so that Americans always prevail on the battlefield.”

Last week, President Donald Trump signed into law a more than $715 billion NDAA authorizing a 2.6 percent pay raise for servicemembers, as well as new purchases of aircrafts, ships, submarines and weapons. In June, the House passed its defense appropriations measure, H.R. 6157, in a vote of 359 to 49, followed by Thursday’s Senate passage.

The defense budget moves on two tracks: the annual NDAA sets policy changes and expenditures for the military and determines how the money will be spent, while the defense appropriations bill is what actually moves money to the Pentagon to support the plan. The defense spending legislation is part of a larger labor, health and human services and education spending bill, an unusual combination, a lawmaker noted.

“It probably sounds like a pretty unusual combination even though I think most voters, most taxpayers understand that to get this work done in the time frame we have to do it, we generally need to bring more than one topic together on the floor at the same time,” Sen. Roy Blunt, R-Mo., said Thursday of the combination of efforts being funded by the same appropriations bill, adding it could be on Trump’s desk by the start of the fiscal year Oct. 1.

The so-called “minibus” appropriations bill saw more than two days of debate on the Senate floor this week. During that time, Senators added measures to boost funding for the identification of Korean War remains by $10 million and trigger a study of a new digital, military health records system.

The 2019 NDAA, H.R. 5515, passed Aug. 13 and will usher through a series of new reforms, such as revamping the military’s “up or out” promotion system and policies to reign in sexual misconduct and domestic abuse among the ranks.

The plan builds on the momentum to increase the size and might of the military in response to China and Russia’s growing capabilities as laid out in Trump’s $686 billion defense budget proposed earlier this year. The Trump request for fiscal year included an increase of more than 15,000 active-duty troops, which lawmakers matched in the NDAA.

A two-year spending deal that lifted federal budget caps allowed the defense budget to increase to more than $715 billion. Coupled with approaching November midterm elections, lawmakers worked to pass the measures earlier than in past years.

At this pace, it’s possible the defense spending bill could see passage by Oct. 1, which would mark the first on-time passage of the NDAA and its funding companion bill in more than 20 years.

However, lawmakers are on a tight clock. The House is on recess until Sept. 4, and Republican lawmakers are racing to confirm Supreme Court nominee Judge Brett Kavanaugh ahead of the midterms. Congress is also facing an array of challenges from the Trump White House that could derail their work.

For example, Trump has threatened not to sign off on government spending plans if there isn’t sufficient money to build a wall along the U.S.-Mexico border. This, as Trump is facing questions tied to the investigation into Russian interference in the 2016 presidential election and a growing list of former administration aides facing criminal charges, which could divert attention on Capitol Hill from finishing up its NDAA funding measure on time.

Without a spending measure in place by Oct. 1, lawmakers might need to pass a temporary budget measure, which is known as a continuing resolution, to keep the government operating.