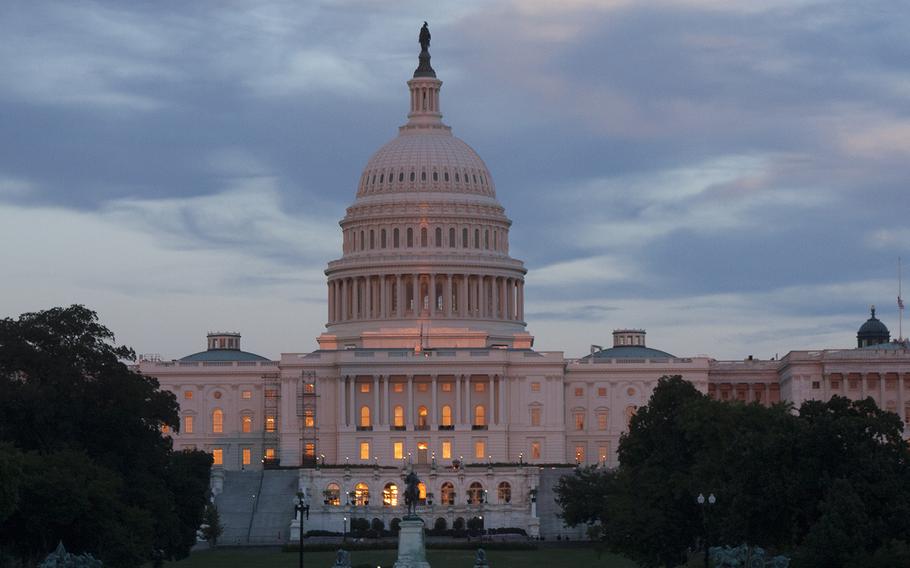 Buy Photo
The sun sets on the Capitol Building in Washington, D.C. (Meredith Tibbetts/Stars and Stripes)

WASHINGTON — The Senate on Thursday afternoon adjourned abruptly without voting on a 2014 defense bill, or any of its 350 amendments, and will not return to work until Dec. 9.

Senators spent the day instead debating and voting on a historic rules change for executive and judicial nominations which would reduce the necessary threshold for passage from a supermajority of 60 votes to a simple majority of 51. Majority Leader Harry Reid, D-Nev., said the move was necessary to fix the Senate’s dysfunction, blaming Republican obstruction that he said was rendering the chamber “obsolete.”

Republicans, incensed that the move stripped them of the chamber’s traditional deference to minority power, blocked further progress on the defense bill and supported adjournment. Sen. John McCain, R-Ariz., called Thursday’s votes “the most historic of any I have seen in my years in the Senate.”

The House has already passed the National Defense Authorization Act, meaning the Senate was the last step before the bill was to reach President Barack Obama’s desk. But the failure to reach a final vote was not much of a surprise — Democratic leaders were not optimistic, noting that 350 amendments had been filed. Republicans were insisting on separate votes on as many of their amendments as possible, and leaders had tried to whittle the list down to a practical number that would allow a Friday vote, but negotiations fell apart after the rules change vote.

The development means there won’t be votes until next month on two of the bill’s most controversial amendments – one proposal by Sen. Kirsten Gillibrand, D-N.Y., which would remove prosecution decisions on sexual assaults from the military’s chain of command, and another by Sen. Claire McCaskill, D-Mo., which would make several prosecutorial changes but preserve the chain of command.

“For fifty-one years Republicans and Democrats have come together to pass the National Defense Authorization Act, which provides our men and women in uniform and their families with the resources they need to face a dangerous and uncertain world,” the statement read. “Time is running short to reach an agreement this year, but it has not yet run out. There are still pathways to passage for this vital bill. We urge the Senate to resume NDAA consideration as soon as they return from their Thanksgiving recess. Our colleagues in the Senate should remember their obligation to our troops and continue to work towards final passage.”

“Given the importance of this bill to our troops, their families, and our national security, I’m nowhere close to giving up on completing the defense authorization bill, even though we will only have days, not weeks, to complete it. I have spoken to Senator Inhofe, Chairman McKeon and Ranking Member Smith, and I know they are equally determined,” Levin’s statement said.

Passing the NDAA is especially critical this year, as House and Senate budget conference talks are ongoing to try to find an alternative to the forced federal spending cuts known as sequestration, which have hit the Defense Department particularly hard. Sequestration would slice about $50 billion from the Pentagon’s budget by mid-January if the budget talks do not produce a compromise alternative.

The 2014 NDAA authorizes a 1 percent pay raise for all members of the uniformed services, consistent with President Obama’s budget request. It also authorizes active duty end strengths of 520,000 for the Army, 323,600 for the Navy, 190,200 for the Marine Corps and 327,600 for the Air Force. The bill also reauthorizes dozens of special pay rates and bonuses, such as bonus payments for servicemembers who see combat or are stationed overseas.