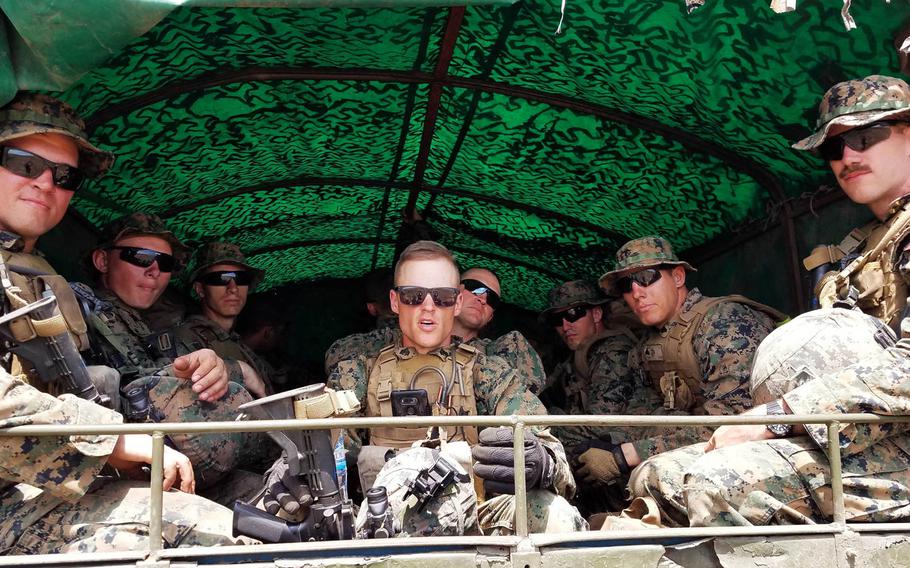 Buy Photo
A group of U.S. Marines with the 2nd Battalion, 25th Marine Regiment, packed into a truck after training with Ukrainian Marines at the Sea Breeze exercise, near Mykolaiv, Ukraine, Saturday, July 14, 2018. (Martin Egnash/Stars and Stripes)

Buy Photo
A group of U.S. Marines with the 2nd Battalion, 25th Marine Regiment, packed into a truck after training with Ukrainian Marines at the Sea Breeze exercise, near Mykolaiv, Ukraine, Saturday, July 14, 2018. (Martin Egnash/Stars and Stripes) 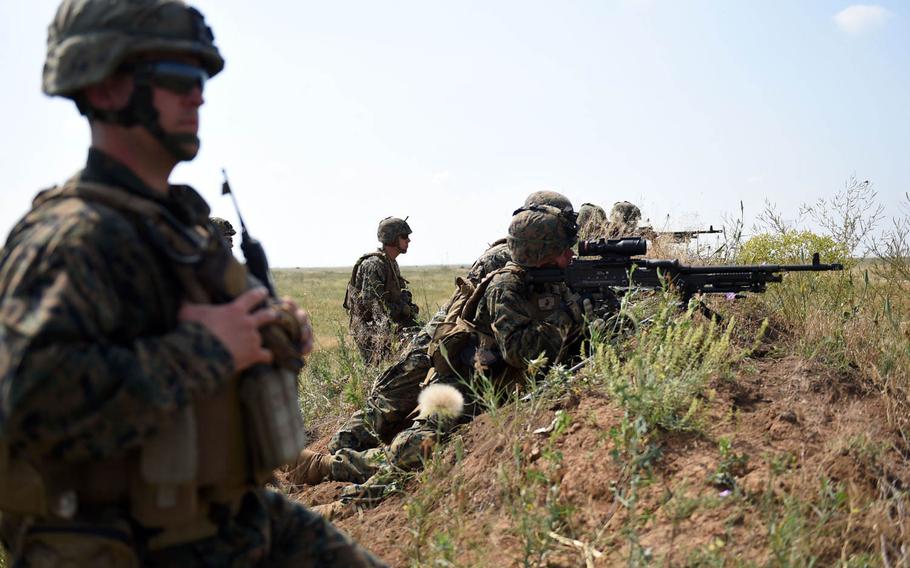 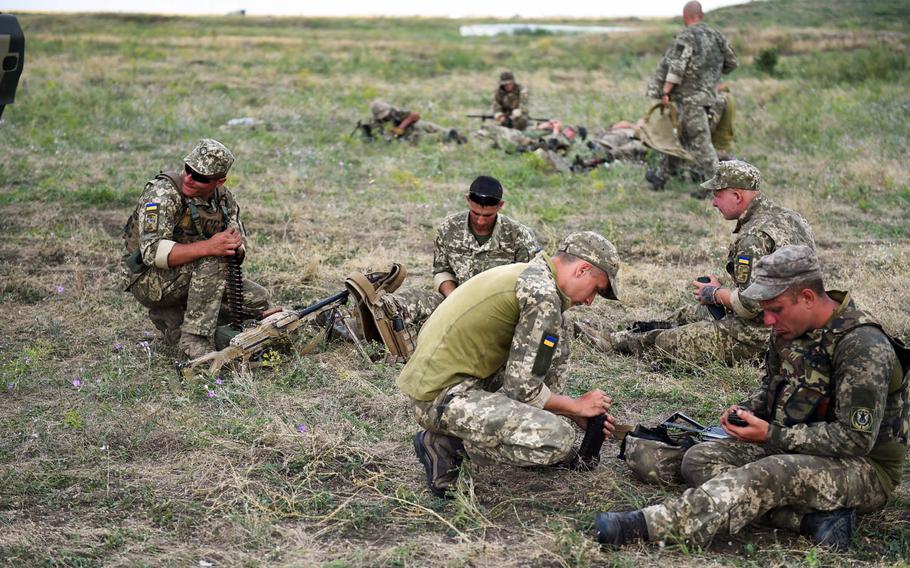 Buy Photo
A Ukrainian translator walks with a group of U.S. Marines during the Sea Breeze exercise near Mykolaiv, Ukraine, Thursday, July 12, 2018. (Martin Egnash/Stars and Stripes)

MYKOLAIV REGION, Ukraine — In the Ukrainian naval infantry, marines who refuse orders literally dig themselves into a hole.

It’s a punishment for insubordination, and that hole just gets deeper until they change their mind.

A disciplinary measure like that would end a U.S. supervisor’s career, said Cpl. Patrick Concannon, who gave Ukrainians a class on the U.S. Marine Corps’ noncommissioned officer corps and fielded questions about American-style punishment.

Concannon is one of more than 40 U.S. Marines sent to southeastern Ukraine to train with the local marines as part of the 19-country Sea Breeze exercise, which U.S. officials hope will encourage the country’s military to emulate western armed forces to meet NATO standards.

U.S. Marines believe that adopting American-style NCO leadership will enable the Ukrainians to be more efficient and adaptive on the battlefield and in garrison.

“By seeing what we do, they might aspire to do some of the things we do (and) adopt certain things that work for their culture, but which are more efficient than things they might currently be doing,” said Maj. Travis Posey, inspector instructor for the Marine Reserve’s Echo Company, 2nd Battalion, 25th Marine Regiment.

The Ukrainians operate with a strong top-down mentality, which means NCOs are often reluctant to deviate from a plan as briefed without explicit instruction.

That leaves every new decision up to a superior.

“Historically speaking, the Ukrainian marines have been very officer-driven,” said Chief Warrant Officer Matthew Anderson, the 25th Marine Regiment’s gunner, who said the most helpful aspect of the two-week exercise may not have been live-fire drills but the Ukrainian troops’ ability to observe U.S. Marine leaders at various levels working together.

The Americans operate by intent, allowing junior officers, NCOs and even non-NCOs to make decisions.

“We rely a lot more on our NCO corps day to day,” said Gunnery Sgt. Francisco Navarro, operations chief for Echo Company. “Their NCO corps really is not there yet.”

Operating from intent streamlines things for officers, Posey said. Commanders don’t have to consider every eventuality or outline every step in a process, and that’s critical for a service like the naval infantry, which is meant to be more quickly deployable and maneuverable than a large army force. “Semper Gumby,” or always flexible, is the Marine Corps’ unofficial motto.

It also lets commanders see the big picture while NCOs are “making his plans a reality,” said Navarro, who also gave professional military education classes to the Ukrainians.

“That’s where they want to be,” Navarro said of the Ukrainian marines. “They’re actually pushing to be at that level.”

“I like the discipline and the leadership of your Marine Corps,” Tonenchuk said. “Not that we don’t have discipline, but the U.S. Marine’s discipline is different. They are very professional.”

The U.S. troops’ bearing and professionalism also stood out to Pvt. Kristina Nikolaeva, a Ukrainian machine gunner, who said she was impressed by their “cohesion and their battle ability.”

It’s not uncommon for Marines to work with partner forces that struggle to break free of a culture of top-down leadership, Posey said.

Militaries in West Africa faced similar challenges, he said. In Senegal, it took close to a decade of mentorship for the military to break such habits, which Posey said may have been a legacy of the country’s days as a French colony.

It’s been less than three decades since Ukraine gained independence, and since then the country’s military has been systematically ruined, Chief of the General Staff Viktor Muzhenko told Ukrainian media last year, three years after Russia’s 2014 annexation of the Crimean Peninsula.

About 70 percent of the Ukrainian military in Crimea sided with Moscow and the Ukrainians are still battling Russian-backed separatists in the country’s east.

During the exercise, Adams worked closely with Tonenchuk. A reservist, Adams is director of construction for a real estate developer in the civilian world. Both careers have taught him to prioritize and allocate resources.

“You supervise and put yourself at the point of the most friction, because you can only be in one place at a time,” he said.

Delegating also allows subordinates to gain experience and build confidence so that they’re ready when called on to lead — which on a battlefield could happen at any moment. Not doing so risks creating a single point of failure in an organization.

“They get the job done,” Adams said of the Ukrainians. “They’re just overtasking different individuals.”

U.S. officers “give the enlisted way more authority,” said Sgt. Chad Sparks, a machine gunner with Echo Company. The Ukrainians seemed surprised by that, he said.

Concannon, for example, has been filling a staff NCO billet two ranks above his for two years.

As a Marine section leader, he said, he expects his lance corporals to already act like NCOs.

That’s an important lesson for the Ukrainians, Posey said.

“We’re showing them it doesn’t matter your rank, you’ll rise to the occasion,” he said.