Sharon McCurdy, a new parent support educator with the Mannheim, Germany, Army Community Service, holds a board with suggestions her group came up with for helping adolescents (Photos by Michael Abrams/Stars and Stripes)

Sharon McCurdy, a new parent support educator with the Mannheim, Germany, Army Community Service, holds a board with suggestions her group came up with for helping adolescents (Photos by Michael Abrams/Stars and Stripes) 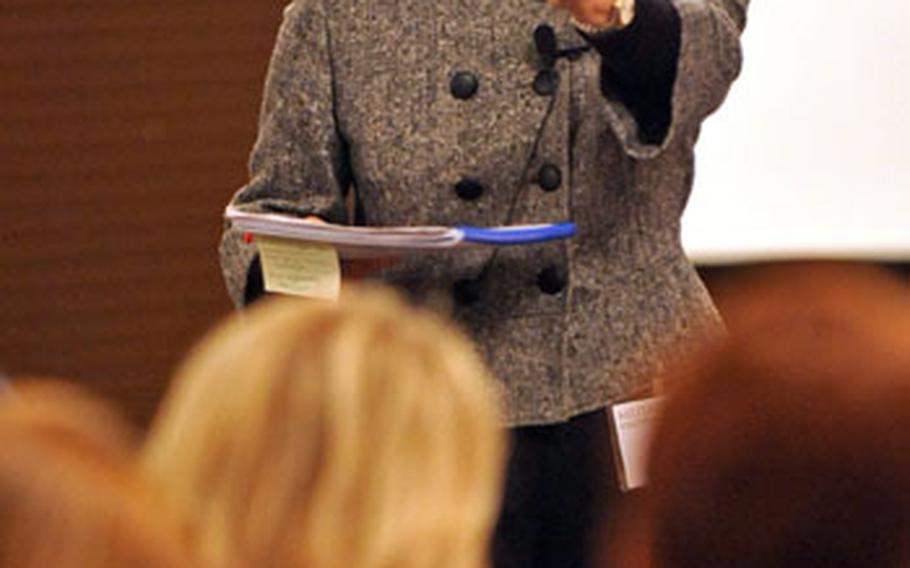 Patty Shinseki makes a point during a training class called Living in the New Normal: Supporting Children through Trauma and Loss at Ramstein, Germany, on Monday. The two-day class was attended by Army, Air Force and Department of Defense Dependents Schools educators and counselors. Shinseki is the wife of retired Gen. Eric Shinseki. the former chairman of the Joint Chiefs of Staff. () One of the books used in class sits on a table. () 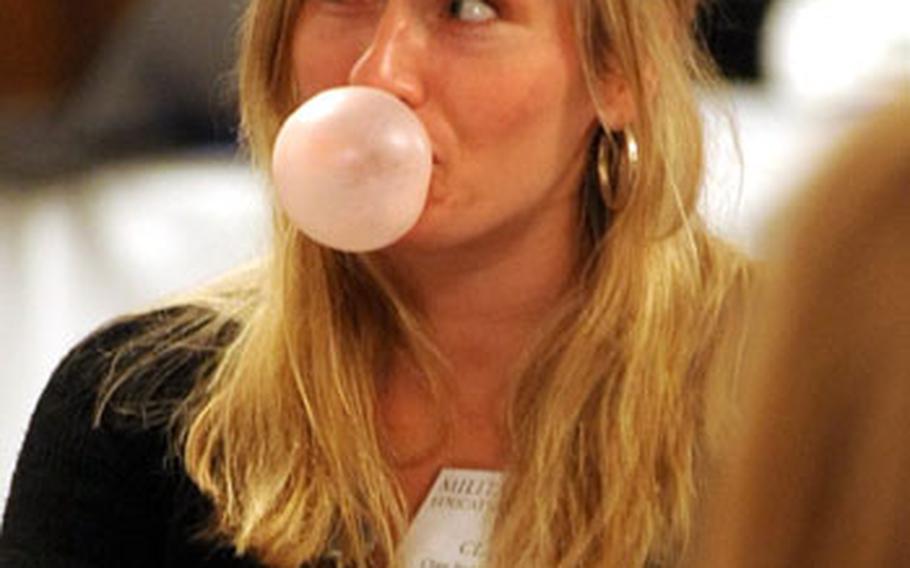 Clare Barnard-Schmitz, a DODDS psychologist in Germany, blows a bubble during a training session describing how bubble gum can be used to calm an anxious child. ()

RAMSTEIN AIR BASE, Germany &#8212; As if the moving weren&#8217;t bad enough, children of servicemen and women face problems unimaginable to most kids their age: a parent gone for long stretches, or worse, the possibility that parent will be killed or injured.

"It&#8217;s not just the soldiers who are veterans," he said. "But also the families and children who are learning to cope."

Kieta was among some 60 educators, health professionals and family readiness group leaders who attended a seminar Monday and Tuesday at Ramstein and learned about ways to help children with trauma and grief.

Patty Shinseki, a member of the board of directors for the Military Child Education Coalition, led the class. It&#8217;s a topic she knows intimately: She is the mother of two children, a former teacher and wife of retired Army Gen. Eric K. Shinseki, who is now serving as President Barack Obama&#8217;s secretary of Veterans Affairs.

"My husband and I were in the military for 38 years," she said. "He sustained injuries in Vietnam. Our children experienced all the changes that went on in our lives."

The course, Living in the New Normal: Supporting Children Through Trauma and Loss, started in 2004 after teachers and parents saw children troubled by soldiers&#8217; first deployments to Iraq, Shinseki said. Experts in psychology and grief counseling were consulted, and their opinions were used as the basis for the curriculum. In the past two years, the class has been taught at Heidelberg and Grafenw&#246;hr, in Germany, and in Vicenza, Italy, as well as at bases throughout the United States.

"What we want children to know is that they can express the death of a loved one," Shinseki said, who chairs the program. "And we want the professionals to know how to address those issues and help that child over the bridge from the normal to the new normal."

Death and injury, however, are not the only triggers for grief and loss, Shinseki said. A military parent with a 10-year-old child is likely to miss half of that child&#8217;s life because of deployments, Shinseki told the seminar attendees.

Kieta understood this all too well, since 2003 the Baumholder community has had three deployments, totaling 41 months. The first deployment was the toughest, he said.

"We lost seven soldiers in one week," he said. "People had a hard time coping."

The attendees read excerpts from books written by noted psychologists and psychiatrists, such as Dr. Martin Seligman&#8217;s "Authentic Happiness," and Dr. Paula Rauch&#8217;s "Raising an Emotionally Healthy Child When a Parent Is Sick." Beside the readings, they were asked to participate in activities that may have seemed silly at first, such as blowing the largest bubble with a wad of gum. There was a point, though.

"When a child comes in with excited emotions," Shinseki said, "it distracts the child and blowing a bubble also produces oxygen, which is soothing."

Maj. Curtis Morrow, deputy director of Education and Developmental Intervention Services at Spangdahlem Air Base, Germany, and a clinical social worker, said information from the class would help him recognize when a child is grieving and ask the right questions.

The lessons also applied to their lives as well, said Debra Porrett-Hathaway, director of outreach services for Child Youth and School Services in Baumholder, Germany. After hearing grief described as a longing for what was before, she realized that was how she felt regarding her daughter and grandchildren returning to the United States.

"At one point or another, everyone at this table had tears in their eyes," she said. "I think everyone thought: &#8216;I wish I knew then what I just learned now. Then, maybe, I would have acted differently to my child, husband or wife.&#8217;"