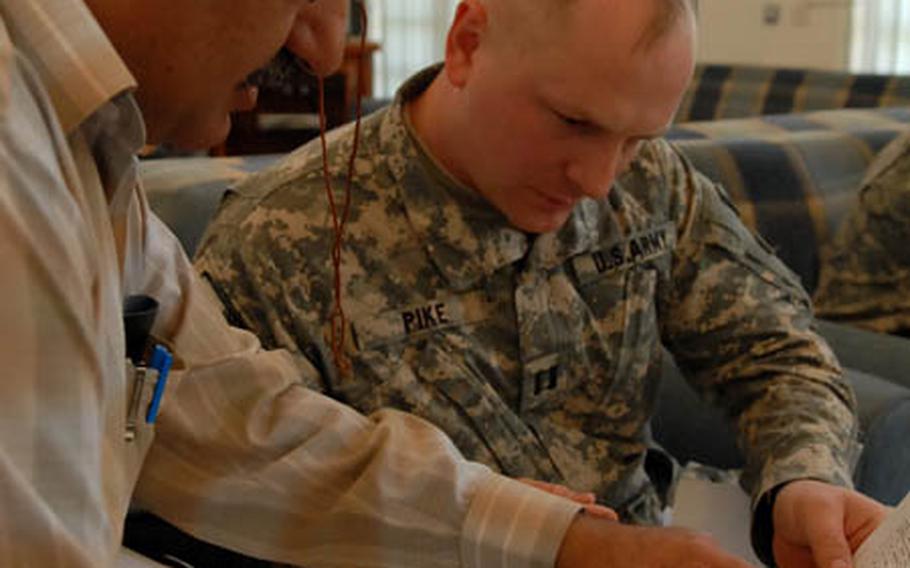 American soldiers and executives from northern Iraq’s state-owned energy companies gather around a map at a Northern Oil Co. building in Kirkuk to examine the site of a new refinery. While lawmakers in Baghdad debate how to divvy up Iraq’s mineral wealth, the country depends upon technocrats to keep that wealth flowing. (James Warden / S&S)

KIRKUK, Iraq &#8212; Not long ago, Sheikh Manaa Abdullah Alobaydi had a couple of drilling rigs that he dispatched to a field in northern Iraq to start making new wells. Alobaydi, the director general of Northern Oil Co., has worked in Iraq&#8217;s oil industry for 40 years and had good reason to send the equipment to the area.

Yet the rigs were left idling when they got caught up in a political dispute between Iraq&#8217;s central government and the Kurdistan Regional Government. Frustrated at the inaction, Alobaydi pulled the rigs from the area and ordered them to a field where they could work without political interference.

As head of one of the country&#8217;s three state-owned oil companies, Alobaydi is one of the most important people in northern Iraq. He is such a major figure that the government won&#8217;t let him and Hunar Najeeb Hassan, director general of Northern Gas Co., travel outside Iraq at the same time.

Yet unlike so many powerful men in Iraq, the two company leaders studiously avoid politics, which both consider the bane of their existence. While lawmakers in Baghdad debate how to divvy up Iraq&#8217;s mineral wealth, the country depends upon apolitical oil and natural gas experts like them to keep that wealth flowing.

"We are technocrats," explained Hassan, who has 38 years in the natural gas industry. "We&#8217;ve got nothing to do with the big mouths."

This could be seen clearly at a meeting with American soldiers last week to prepare for an energy conference.

Lawmakers in Baghdad have yet to agree on a hydrocarbon law that would regulate how the country can develop and distribute its mineral wealth, and Kirkuk&#8217;s sizable oil fields have made the province a flash point in preparing for elections scheduled this fall.

Yet neither issue arose during the discussions. Instead, the executives talked about dry technical issues such as which types of power plants last longest and which fuel is the most efficient in those power plants.

"All (Alobaydi) wants to do is pump oil," said Maj. Robb Marshall, the 3rd Battalion, 6th Artillery Regiment operations officer. "There is no political decision that can help him pump more oil."

"Their concern is upping production, upping the wells, getting money for Iraq &#8212; and for themselves, by the way," added Capt. Zebulon Pike, a member of the 1st Armor Division&#8217;s Power, Oil and Infrastructure team.

The men&#8217;s technical knowledge has spread to their American advisers, who discuss mineral details like seasoned roughnecks. Pike, for example, is a criminal justice major who hasn&#8217;t had a chemistry class since he was in his mid-teens. Yet he can recite the composition of crude petroleum to the approval of the oil company&#8217;s pipeline chief.

Hassan and Alobaydi would be even more comfortable in an oil company&#8217;s board room. Both are English-speaking, suit-wearing execs in the western mold who have seen a good share of the world. Throughout Monday&#8217;s meeting, Hassan recommended European and Middle Eastern destinations the soldiers should visit.

However, they are freer with their condemnation of their country&#8217;s leaders than western execs and make no bones about the havoc that politicians of all stripes have played with their operations.

"Most politicians always blame somebody &#8212; and they know our names," Hassan joked. "If a politician is not a bastard, his brother is."

Those last words originated with Hassan&#8217;s father, an accountant who died when Hassan was just 11. Hassan has remembered his advice throughout his career: Keep away from politics. Mind your own business.

"Every day is a new proof that he is right," Hassan said.

Despite the politics, the technocrats have succeeded in bringing the Kirkuk area&#8217;s production back to prewar levels, although they still face substantial difficulties. Processing plants need to be upgraded, and pipelines need to be repaired. One aging pipeline has about 400 holes, most from simple corrosion.

The men are well into their senior years, but they continue to work long days and are often awakened in the middle of the night to handle emergencies. Yet as complex as these issues are, they are straightforward compared to Iraq&#8217;s political challenges.

With all the work &#8212; political and technical &#8212; Hassan is already dreaming of the easy life he plans for his retirement.

In the meantime, both company heads plan to get as much mineral wealth out of the ground as they can, however much the politicians might annoy them.