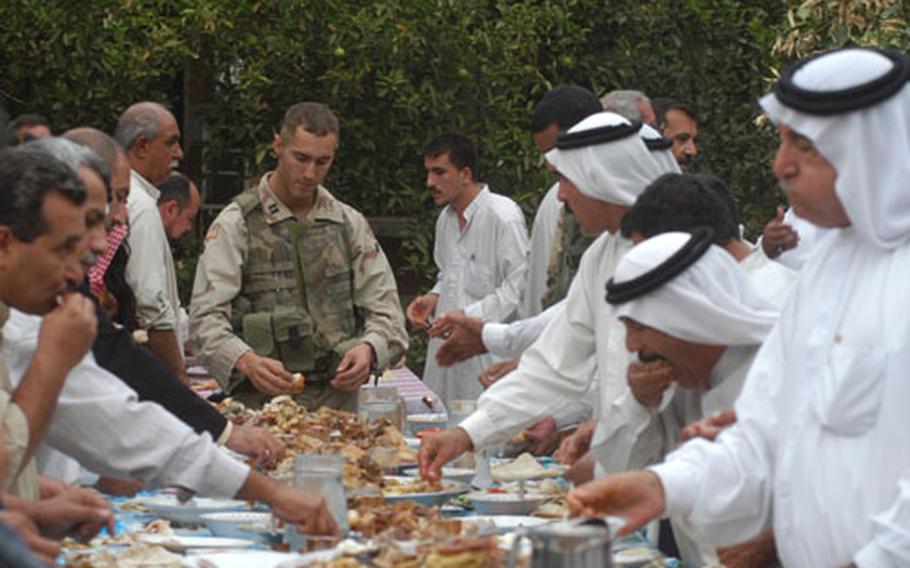 Capt. Matthew Cunningham, commander of Company A, 1st Battalion, 8th Infantry Regiment in Iraq shares a meal Friday with several locals at the home of a local shiek. The meal was served "family style" in the garden, under the grapefruit trees. The shiek invited military members stationed nearby as a sign of friendship. (Ron Jensen / S&S)

A vote billed as a &#8220;selection,&#8221; not an election, gave citizens a chance to elect a general council. The vote was cobbled together by the U.S. Army stationed in the area.

He said he expected about half of the roughly 40,000 eligible voters to make their mark to elect five people in each of the city&#8217;s 12 districts. Those 60 elected representatives will then decide which 12 from their ranks will have votes on issues affecting the city. The rest will be non-voting representatives.

By mid-afternoon, the voting seemed to be going smoothly. At one polling place in a school near a Muslim shrine, more than 600 people had voted.

The man in charge of that polling place, Adnan Nogi al Baldawi, said the voters were happy with the chance to express themselves with a ballot.

He said the election was a great day in the history of a city that has known troubles. The city rebelled against Saddam in 1982. The dictator cruelly crushed the rebellion. While the city is pro-American, the rural areas around it remain loyal to Saddam.

Cunningham said there was a &#8220;power vacuum&#8221; in the city when the troops arrived in late spring. The town&#8217;s council represented only a small percentage of the people.

&#8220;It was much more aligned with tribes,&#8221; he said. Now, the council will represent geographical areas of the city, and council members will answer to their neighbors.

The status quo, he said, was a destabilizing factor. The only solution seemed to be an election.

The problem, however, was the lack of a constitution in Iraq as a guide for elections. There are no election rules; no established qualifications for candidates. That&#8217;s why this is being called a &#8220;selection&#8221; rather than an election.

Cunningham began a lesson for the city, which has nearly 100,000 residents.

The people chose the candidates. The Army had power of refusal, however. No Baath Party members allowed, for instance, because that was the party of Saddam Hussein.

It wasn&#8217;t a completely smooth process.

As the word spread and Cunningham devised the rules &#8212; anyone over age 18 can vote, even women &#8212; and campaign posters sprouted, covering walls, poles and windows.

Cunningham said there is nothing in Army training to prepare an officer for this role, but he will not soon forget it.