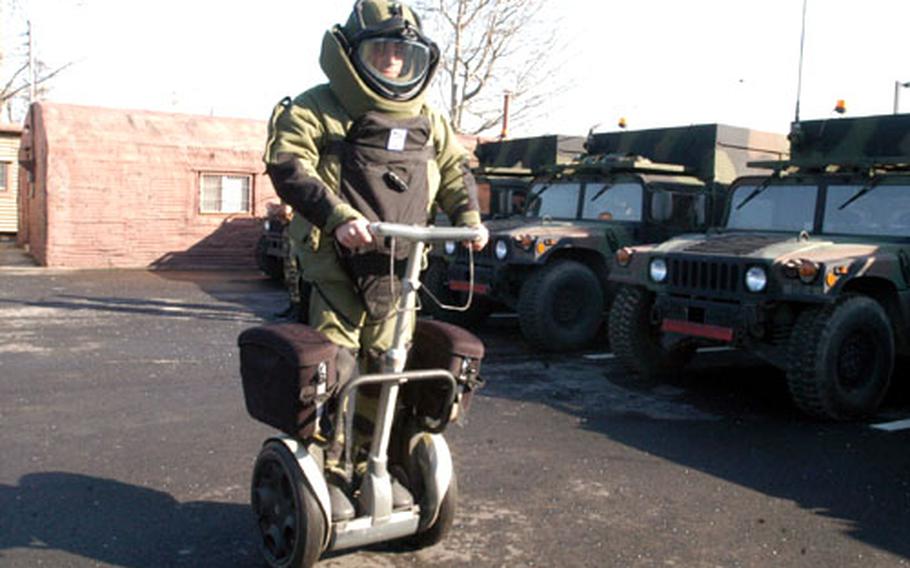 The Segway is a two-wheeled, electric scooter that uses computers and gyroscopes to stay upright. It was invented by entrepreneur Dean Kamen using technology developed for an electric wheelchair able to climb stairs and let disabled people move standing upright.

Since the device was unveiled in December 2001, it has been put to use by a range of U.S. private and government organizations. In 2003, the Defense Advanced Research Projects Agency contracted with Segway to convert 15 of the scooters into Robotic Mobility Platforms for use in robotic research projects.

At Camp Red Cloud, soldiers from the 718th EOD Company are using a Segway as a bomb disposal tool.

In South Korea, EOD teams deal mostly with unexploded ordnance, but in Iraq the teams are responsible for defusing or destroying improvised explosive devices used by insurgents to target U.S. forces.

One of the 718th, Staff Sgt. Scott Rominger, 36, of North Carolina, said the Segway can save bomb disposal teams a lot of energy when they encounter an IED.

Standard practice whenever a possible IED is found is to set up a minimum 300-meter (984-foot) exclusion zone around the suspected bomb. The bomb disposal team leader then dons a heavy protective suit and approaches the device on foot, Rominger said.

The bomb suit, which includes batteries to operate radio equipment and a face mask defogger, weighs more than 85 pounds, he said.

The Segway is perfect for transporting the soldier and his heavy equipment up to the device without endangering others. The scooter, which has containers for storing equipment on both sides, is small enough to fit in the trunk of a car and can be lifted easily by a soldier, Rominger said.

The Segway also comes in handy for administrative runs among barracks, he added.

However, Rominger said he would not like to see every soldier provided with a Segway because of the positive health benefits of walking around post.

The Segway is easy to ride. Foot buttons allow you to move forward or backward simply by shifting weight; twisting the handlebar guides turning.

The 718th got its Segway on loan from the U.S. Navy after one of its soldiers completed a training and maintenance course.

Most of the EOD soldiers have had a turn on the Segway. So far the only accident at Camp Red Cloud has involved a flat tire that threw off the device&#8217;s computer, sending a soldier sprawling to the ground, Rominger said.

Staff Sgt. Robert Wells, 30, of Charleston, S.C., rides the scooter every chance he gets despite teasing from other soldiers who suggest the device is not macho enough for a military man.

&#8220;They think it is a techno-geek thing, but anything that saves me walking 300 to 400 meters is all right by me,&#8221; said Wells, who rode another Segway at Edwards Air Force Base, Calif., before coming to South Korea.

The Segway travels about 12 mph, fast enough to keep up with cars traveling the legal speed limit on post, he said.

Any soldiers in South Korea interested in joining an EOD team should call 732-6165.