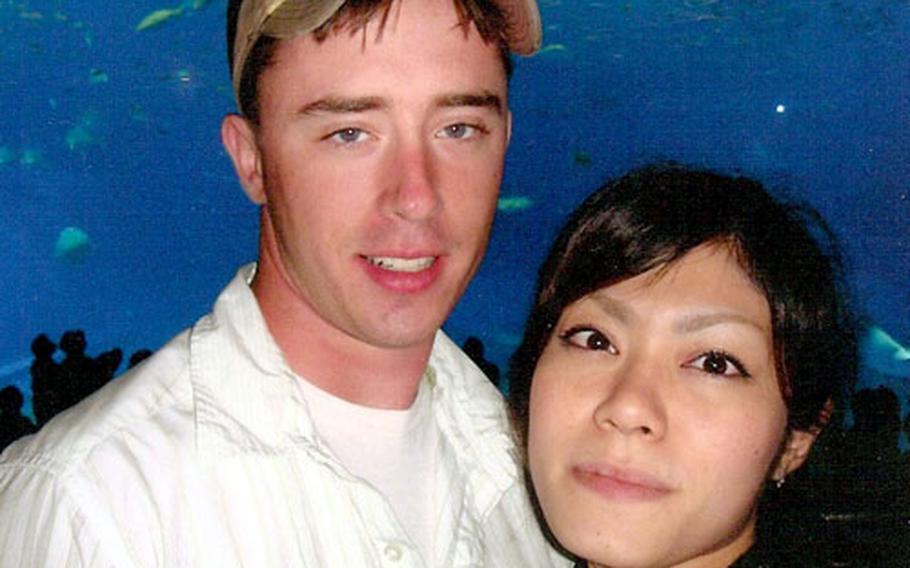 Hotaru Nakama and Marine Sgt. Michael Fershke enjoy their first date in May 2007. Last July, they wed by proxy while Ferschke was deployed to Iraq. He was killed in combat a month later. (Courtesy of Hotaru Ferschke)

Hotaru Nakama and Marine Sgt. Michael Fershke enjoy their first date in May 2007. Last July, they wed by proxy while Ferschke was deployed to Iraq. He was killed in combat a month later. (Courtesy of Hotaru Ferschke) 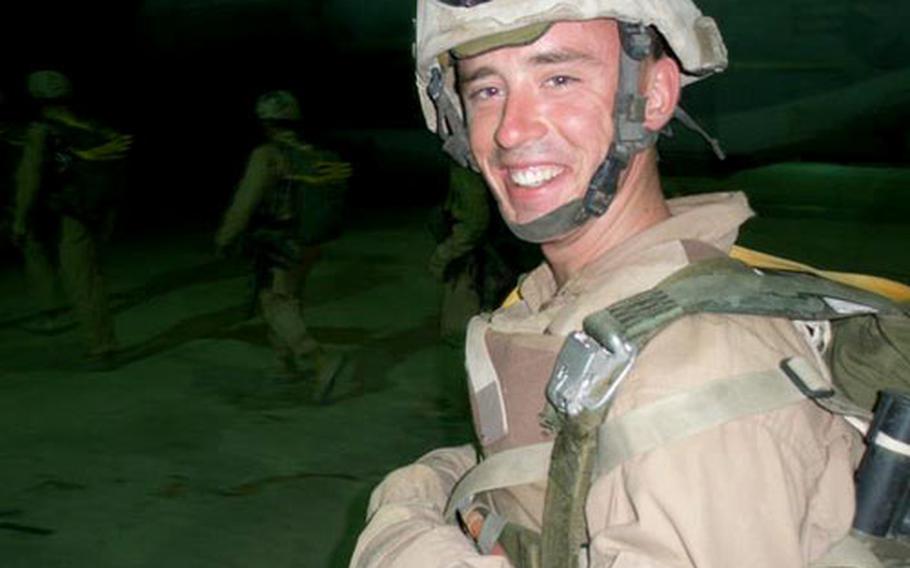 Marine Sgt. Michael Ferschke moves along on patrol in July in Iraq. (Courtesy of Hotaru Ferschke) 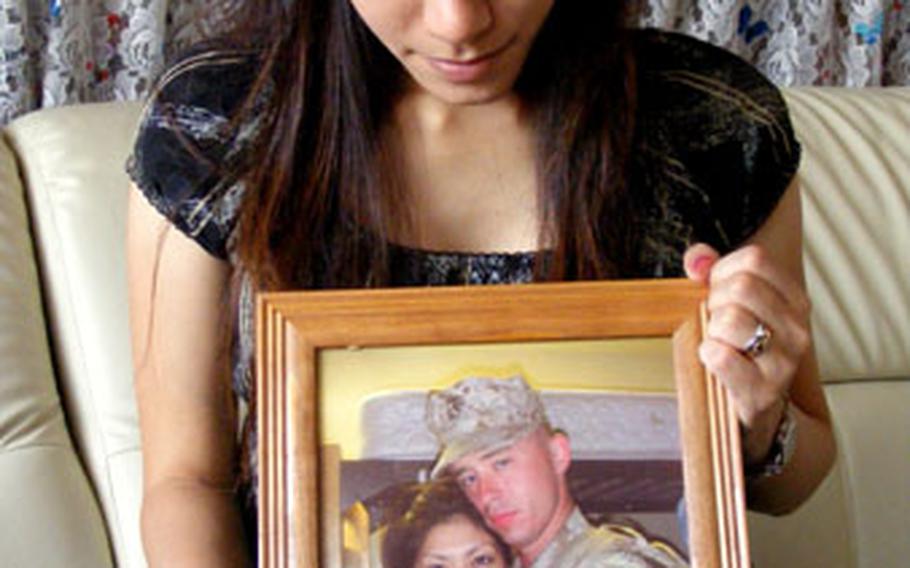 Hotaru Ferschke displays a picture of herself with Marine Sgt. Michael Ferschke just before he deployed to Iraq in April. (David Allen / S&S)

GINOZA, Okinawa -- A lot can change in a little more than a year. Lives can take turns down paths few can imagine.

Marine Sgt. Michael H. Ferschke Jr.&#8217;s path led him to extend his enlistment for a tour in Iraq and marry the mother of his unborn son by proxy at the stroke of a pen. Just a month later, he was killed conducting door-to-door searches in a town north of Baghdad.

For his Okinawan wife, Hotaru Nakama Ferschke, barely wed and widowed, the path has led to a decision to raise their son in the rural Tennessee town that formed his father.

Hotaru, 24, who works on Kadena Air Base, met Michael, 22, a radio operator with the 3rd Reconnaissance Battalion, 3rd Marine Division, at a friend&#8217;s party on Camp Schwab in March 2007. She said he asked her out that night, but she was wary about dating an American, concerned that cultural differences would be too much of a barrier.

But he was persistent, Hotaru said during an interview Wednesday in her parents&#8217; home in Ginoza, near the base.

"We discussed the different environments and cultures we grew up with and the difficulties we may face," she said. "After a good talk, we both were convinced that we would be able to overcome any differences."

Their first date was a drive to the aquarium at Expo Park in nearby Nago. They found they liked each other&#8217;s company.

"But we didn&#8217;t have as much time together as we wanted because he was busy with training and a trip back to the States to attend a wedding," she said.

By December they both knew there was a future together, and she spent Christmas with Ferschke at his home in Maryville, Tenn.

Maryville is a small town in the foothills of the Great Smoky Mountains, about 20 miles south of Knoxville. His family received her with open arms.

"I instantly liked the place, with a countryside environment, because I grew up in a rural community here. I knew that I would fit in the town," she said. "And more than anything else, his family and relatives all accepted me so warmly."

The trip came just after the couple seriously discussed breaking up.

"He told me that he was going to Iraq and it would not be fair to make me wait for him," she said. "He said, &#8216;You have a good job, good family and many friends here, and I know you love Okinawa. I cannot ask you to drop everything you have and follow me to the States. I am a man with a risk of going to Iraq.&#8217;

She felt the same. "With all the risks and things that I would have to leave behind, I still wanted to be with him. We decided to stay together and share our future."

Michael extended his enlistment so he coulddeploy to Iraq, his mother, Robin, said in a telephone interview.

"He joined the Marines when he was only 17, just finished high school," she said, adding that the sergeant planned to re-enlist for another four years so he could become a dive instructor.

"He trained a lot, but was never sent into battle," his mother said. "He was to be done in October, but he extended because he had not done his job yet.

"He said he was a team leader and he had to go with his men," she said. "It was hard for me. Scary, very scary."

Michael was the youngest of her three children, and they were close.

"He&#8217;d call and tell me everything," she said. "Just before he was killed, he called and told me how he was excited about the baby and relieved that the marriage had finally gone through."

Hotaru said Michael knew he would be placed in danger.

"He told me that being a reconnaissance Marine, his job would be to fight," she said. "He said that serving there was what he really wanted to do for his country."

There wouldn&#8217;t be much time spent in the confines of a safe base, she was told.

Michael gave Hotaru an engagement ring just before he left for Iraq in mid-April.

But there was always something strange about his attitude about being deployed, Hotaru said. On several occasions &#8212; when he wanted to see friends, visit a new spot on Okinawa or get more training &#8212; he&#8217;d say it could well be his last chance.

She found out she was pregnant in mid-May and the couple decided to process the paperwork needed to be wed.

"He called the baby a miracle," she said. "He said he would ask his boss to start the process immediately. I thought it would be almost impossible, being so far away from each other."

But Michael told her to look inside a suitcase he left with her.

"There was a file inside the suitcase with all necessary documents for marriage," she said. "He had already signed a marriage registration, and there was a copy of his passport among other documents."

They were married by proxy on July 10.

"It could have been done earlier, but I was putting off working on the process because I was suffering from bad morning sickness," she said. "But he hurried me, saying that he wanted to make sure everything was done before he went out for a scheduled mission."

The last she heard from her new husband was on July 31.

"He called me shortly before he was leaving," she said. "I e-mailed him an ultrasound of our baby. He was so excited."

On Aug. 11, Hotaru had unexpected visitors to her office in the Kadena Ammunition Storage Area. A first sergeant, a captain, a chaplain, an interpreter and one of her husband&#8217;s close friends arrived with the news that her husband was dead.

"At first, I could not believe what was being said," Hotaru said, brushing a lock of hair from her teary eyes. "But when I saw our friend crying, it brought me back to reality."

"I felt lightheaded and vomited in the bathroom," she said.

Hotaru had high praise for the way she has been treated by the Marines.

"Since that day on, I have received tremendous support from the Marine Corps," she said. "They helped me and my mother to visit his family in the States."

It was a sad, hectic time. With her mother and mother-in-law by her side, Hotaru said, she was overwhelmed by the support she and her unborn baby received from the Ferschke family, their friends &#8212; and strangers.

"All of his family, relatives, friends and neighbors were so kind to us. Marines and people from a nearby Air Force base visited us to offer condolences," she said. "Strangers, including Japanese living in the States, called me, offering help and support. Along with prayers, people sent us e-mails, cards and gifts &#8212; even a kilt &#8212; and monetary gifts for our baby."

The family has established a trust fund for the baby. Robin took Hotaru for a second ultrasound, and they were told the baby &#8212; due in January &#8212; would be a boy.

His name will be Michael Ferschke III.

Robin said she will fly to Okinawa for the birth.

"He&#8217;ll be known as Mikey," she said. "When they come back here, they&#8217;ll be staying with us, and they will have everything they need. This baby is going to have a lot of aunts and uncles."

"Before flying back for the funeral, I was totally at a loss, not knowing what to do in the future," Hotaru said. "But my heart was overwhelmed with gratitude to all the people who offered us such warm support. The funeral service was attended by so many people.

"I want our son to know how much his father was loved by so many people," she said. "I realized that it was best to raise him in the environment where his father grew up, so that he would feel his father&#8217;s presence and be proud of him."

She said she told the Ferschkes of her plan and they were bowled over by her decision.

"When I talked about my plan to move to his hometown to raise our son, my mother-in-law told me that it was something that they wanted me to do, but they did not ask because she wanted to respect my freedom.

"My mother, meanwhile, had mixed feelings. She suggested me to raise the baby [on Okinawa] until he finishes elementary school, but I told her that it was important for him to grow up in the same environment as his father, beginning at an early age."

In the end, joined by 2 rings

GINOZA, Okinawa &#8212; Hotaru Ferschke didn&#8217;t let her guests leave without inviting them to watch a DVD slide show of her husband&#8217;s life.

Sgt. Michael Ferschke was killed in Iraq on Aug. 10, and his family had prepared a photo eulogy to the young Marine. He would have turned 23 in November.

And as the images on the wide-screen TV progressed from infancy to boyhood to the Marines and their brief romance, with Tom Petty tunes playing in the background, Hotaru smiled and absently fiddled with her wedding band.

"After we were legally married, his fellow Marines teased him for him not wearing a wedding ring," she said. "He asked me to get wedding rings for us and I told him that we would get them after he came home."

But Michael was killed during combat, and his ring finger remained bare.

"I talked about this to his mother during our visit for the funeral," Hotaru said. "She bought us rings."

During the wake, the couple wore their rings for the first time.

"His father put the ring on my finger in front of the casket where my husband lay so peacefully," Hotaru said softly, trying to hold back tears. "I placed his ring on his finger."

She said she still hears her husband&#8217;s voice clearly.