Seeing what Dad does downrange 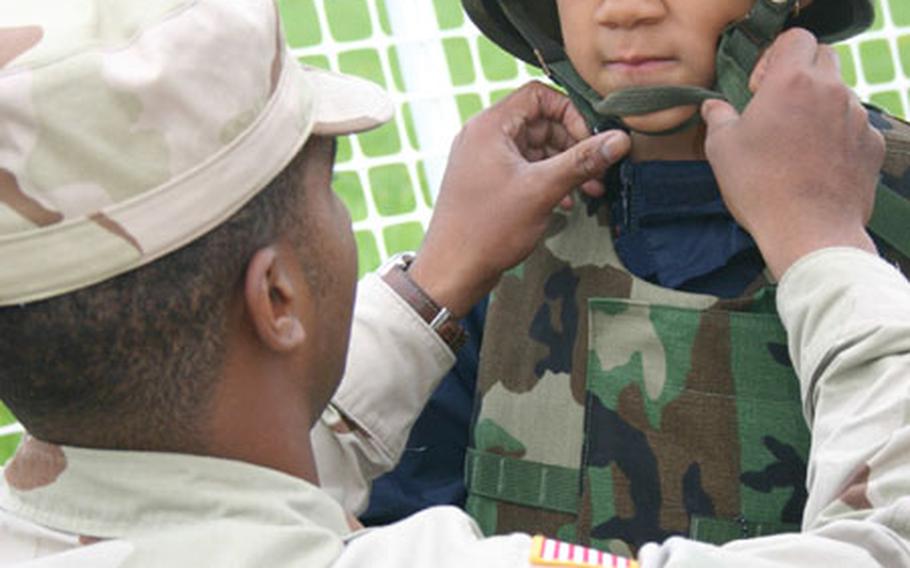 The 1st Battalion, 7th Field Artillery Rear Detachment, held a Boys Day Out event at the shooting range in Schweinfurt on Monday. Second-grader Calvin Graham makes a face as Pvt. Erik Wright fastens his Kevlar helmet in preparation for his turn at the shooting range. (Courtesy of U.S. Army)

The 1st Battalion, 7th Field Artillery Rear Detachment, held a Boys Day Out event at the shooting range in Schweinfurt on Monday. Second-grader Calvin Graham makes a face as Pvt. Erik Wright fastens his Kevlar helmet in preparation for his turn at the shooting range. (Courtesy of U.S. Army) 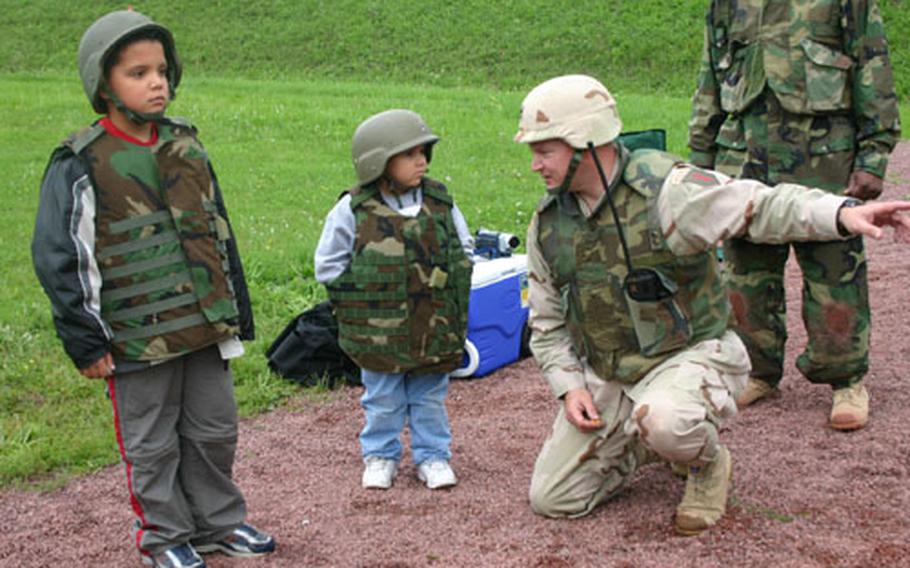 Third-grader Derrin King watches as Sgt. 1st Class William Egbers point toward a plastic target the boys will be shooting at, while 5-year-old Steven Harrison looks on with nervous anticipation. (Courtesy of U.S. Army) 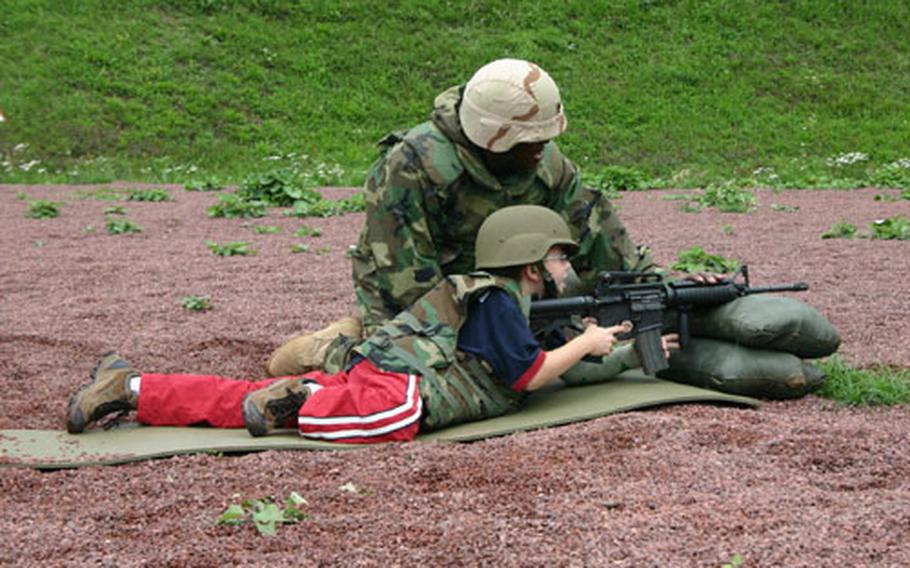 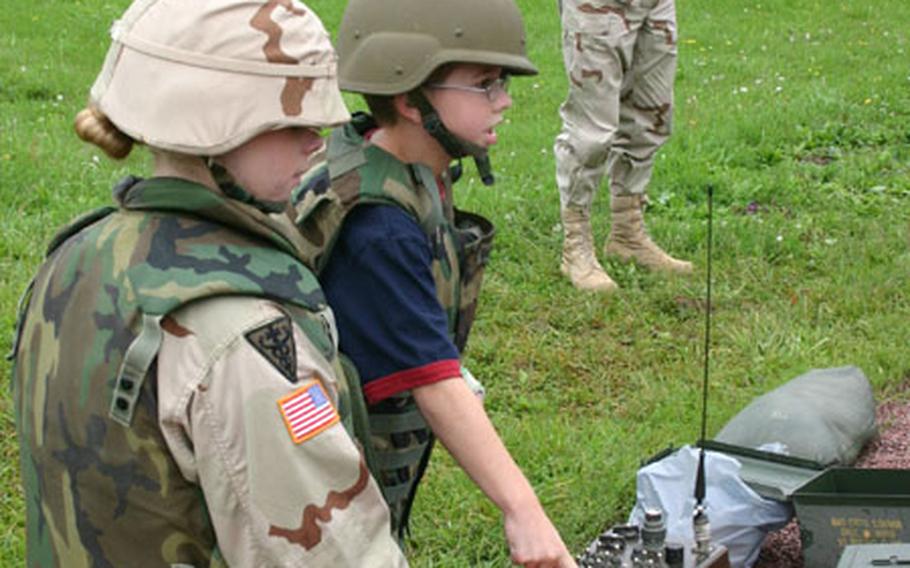 Spc. Julie Lamar watches as third-grader Joshua Zeeman pushes a button causing the target to raise after another boy shot it. Lamar, a medic from the 299th Forward Support Battalion, was there to ensure the safety of the children. Capt. Matthew Lennox, the 1st Battalion, 7th Field Artillery rear detachment commander, supervises. (Courtesy of U.S. Army) 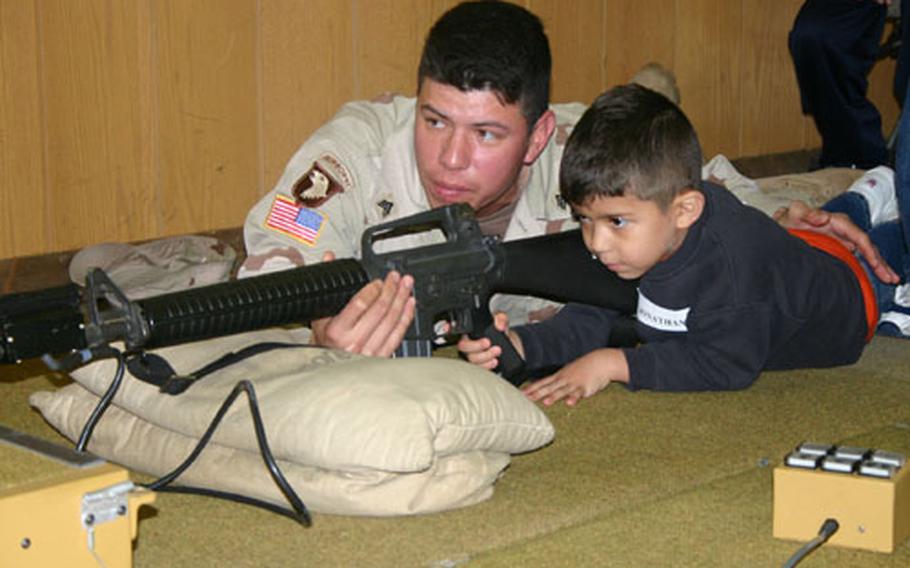 Sgt. John Garcia holds the barrel while his son, Jonathan, takes aim at a small paper target. Sgt. Garcia taught a group of boys the basics of markmanship with this simulator, called the "Weaponeer." (Courtesy of U.S. Army)

SCHWEINFURT, Germany &#8212; Sixteen-year-old B.J. Hinze lay flat on a mat, staring through the sight of his M16 rifle at a green man-shaped target 25 meters across the grass.

He squeezed the trigger. Boom! Down went the target. Boom! Down it went again. Twenty times &#8212; without a miss.

&#8220;Guy time&#8221; is limited these days for boys such as B.J., whose dad is serving in Iraq this year with the 1st Infantry Division. But on Monday, he and 35 other youngsters spent Monday in training with rear-detachment soldiers from the Schweinfurt-based 1st Battalion, 7th Field Artillery Regiment.

The boys, ages 4 to 16, started out in weapons-safety classes on the firing range at Schweinfurt&#8217;s Victory Training Center. Then they practiced shooting with indoor rifle simulators, the same ones their fathers train on.

Finally they trekked out, two at a time, to the rifle range, clad in flak vests and Kevlar helmets. There, under the close supervision of Sgt. 1st Class Will Egbers and several assistants, they fired M4s and M16s &#8212; yes, with live ammunition &#8212; at targets placed in front of a grassy berm.

After they finished shooting, they ate a barbecue lunch. The kids bubbled over their new experience. Several said they thought such a powerful automatic rifle would kick harder against their shoulders.

Capt. Matthew Lennox, the rear-detachment commander, said it took some convincing at higher levels to get approval for a live-fire event involving children.

Sergeants divided the boys into squadrons and marched them from one training station to the next. Sgt. John Garcia called out cadence for his pint-sized charges. He called his squad the &#8220;Dragons,&#8221; though one youngster piped up that he&#8217;d prefer to be a &#8220;Power Ranger.&#8221;

Lennox shot photos to send to the 1-7 Field Artillery&#8217;s soldier-dads. The unit could use a boost: Six of its men have been killed since 1st ID deployed in February.