Seeing beyond their differences 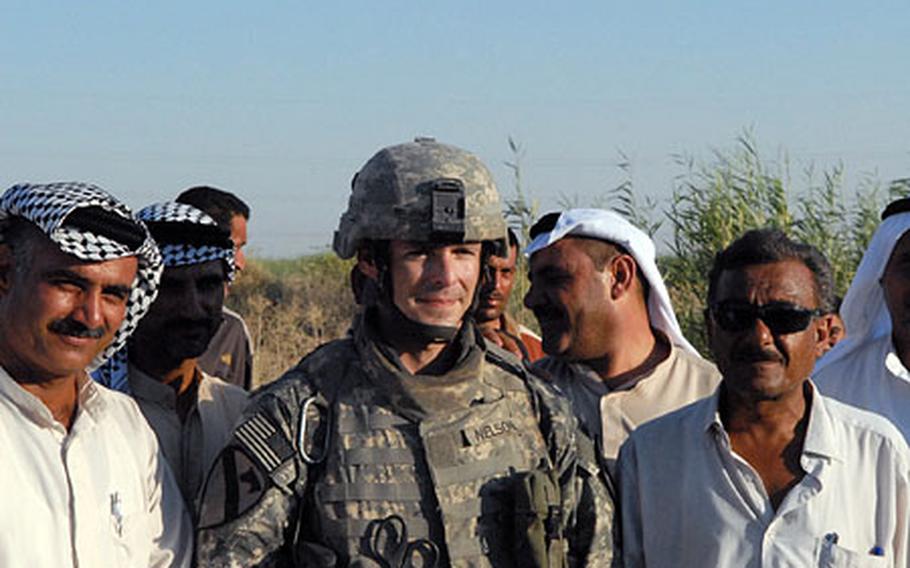 Capt. John Nelson, of the 2nd Battalion, 5th Cavalry Regiment stands between Sheikh Mohsin Ali Kadem al Tamimi (left in the headdress) and Hassan Jabbar Mirhrish on Aug. 23. The two Abu Ghraib residents are among the community members who have partnered together to establish a checkpoint in the Western Baghdad district that will be manned by both Shiites and Sunnis. (Zeke Minaya / S&S)

Capt. John Nelson, of the 2nd Battalion, 5th Cavalry Regiment stands between Sheikh Mohsin Ali Kadem al Tamimi (left in the headdress) and Hassan Jabbar Mirhrish on Aug. 23. The two Abu Ghraib residents are among the community members who have partnered together to establish a checkpoint in the Western Baghdad district that will be manned by both Shiites and Sunnis. (Zeke Minaya / S&S) 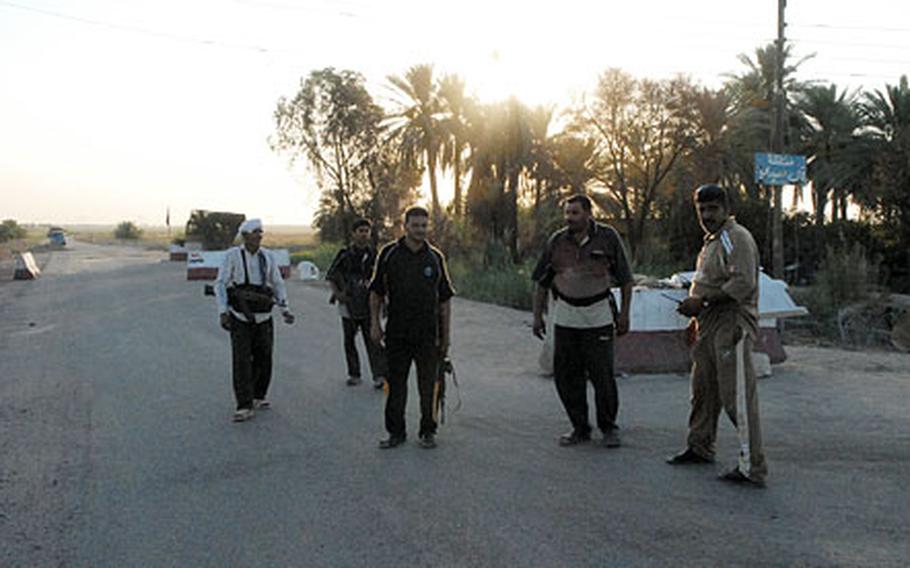 Residents of the western Baghdad district of Abu Ghraib guard one of three planned checkpoints in the area that is to be manned by both Shiites and Sunnis. The area has seen improvements in security with the increased involvement of deputized groups of civilians. (Zeke Minaya / S&S) 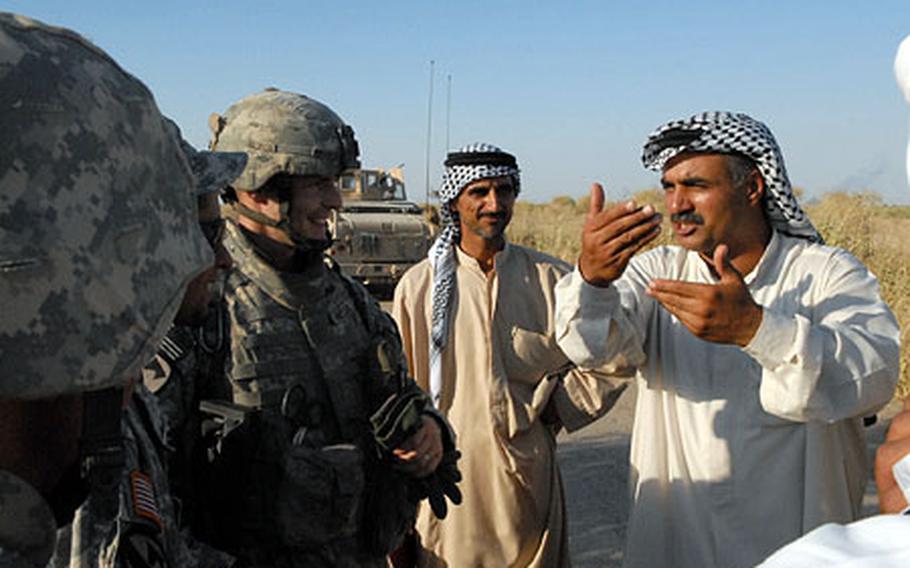 Sheikh Mohsin Ali Kadem al Tamimi gestures as he speaks to Capt. John Nelson of the 2nd Battalion, 5th Cavalry Regiment during the establishment of a security checkpoint in the western Baghdad district of Abu Ghraib. The checkpoint was placed in an area with both Shiite and Sunni villages and will have guards from both groups. (Zeke Minaya / S&S)

ABU GHRAIB, Iraq &#8212; On his way home recently, Sheik Mohsin Ali Kadem al-Tamimi was snatched up by men who beat him and threaten his life for cooperating with American forces, he said.

Though he was released, Mohsin, who is Shiite, said he believed the kidnappers were Shiite militants who wanted to prevent him from entering into a nascent neighborhood watch movement with Sunnis in his community.

On Thursday, Mohsin stood on a sun-blasted stretch of road surrounded by the lush, canal-fed fields of the western Baghdad district of Abu Ghraib. He was there in defiance of the threats, he said, and to follow through on plans to establish several checkpoints in the area to be manned by both Shiites and Sunnis.

Soldiers with Company D, 2nd Battalion, 5th Cavalry Regiment have been working with residents for fewer than three months and have led the drive to establish the joint checkpoints.

Capt. John Nelson, a 33-year-old from Louisville, Ky., said it took a lot of work as a go-between to get both sides to agree to meet.

&#8220;We had to identify the more level-headed leaders and get them to talk,&#8221; Nelson said. He said he admired the courage of Mohsin and others in the community who placed the fledging, but growing, peace in the region above sectarian interests.

About two weeks ago, the first of three planned checkpoints was put in place. In keeping with the recent success of other &#8220;bottom-up&#8221; security initiatives in the area, the checkpoint has not been attacked, U.S. military officials and neighborhood residents said.

The new checkpoint on Thursday was placed near a Shiite village that is tucked between predominately Sunni territories. In the not-too-distant past, the isolated fields provided excellent cover for sectarian skirmishes, soldiers said. It&#8217;s also believed to be the site of an ambush several months ago that led to the disappearance of several local Sunni tribe members.

On Thursday, however, members of the community mixed freely, regardless of their affiliation, and vowed to commit to the success of the joint project.

&#8220;This is a great accomplishment for the area,&#8221; said Hassan Jabbar Mirhrish, a prominent Sunni leader and a former colonel in the Saddam Hussein-era military. &#8220;What the Iraqi government has been able to do in four years we have managed to do in one month.&#8221;

The area is not without its challenges. There are few kind words for the national government in Baghdad, which was decried as favoring Shiite militias and being too cozy with Iran. And Nelson had to wait long past the appointed meeting time to gather all the community members who had promised to man the new checkpoint on Thursday.

But residents of the area were clearly pleased with the occasion and hopeful that their gains would be lasting.