Security upped after explosives claim at US base in Kaiserslautern 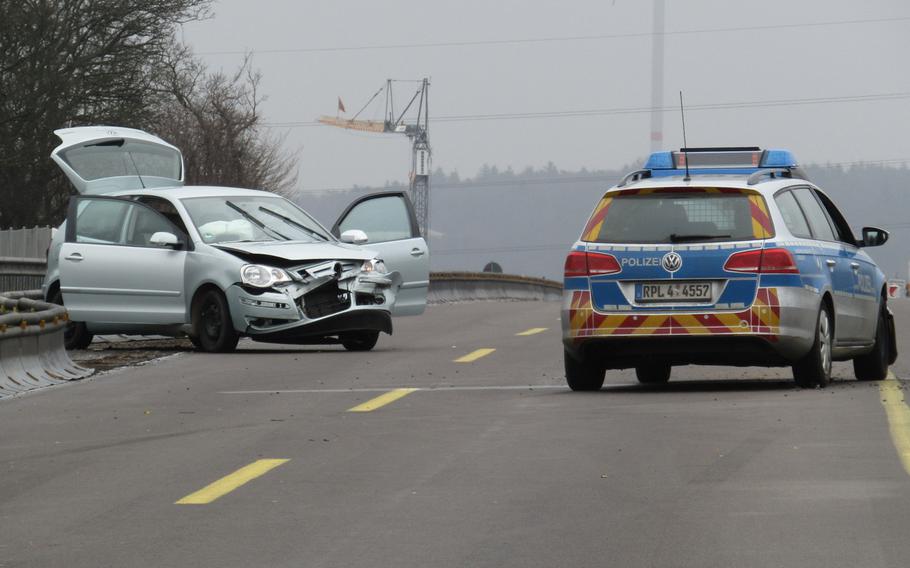 A 61-year-old man was arrested Saturday after trying to enter a U.S. military base in Kaiserslautern, Germany. The man, who told security guards he had explosives in his car, was apprehended after he led police on a chase and crashed his car on the autobahn. (Courtesy of Polizei Westpfalz)

KAISERSLAUTERN, Germany — The U.S. military has tightened security at the Pulaski Barracks gate, where a “disturbed” man claimed to have explosives and then led police on a car chase that shut down a stretch of the A6 Autobahn for more than three hours on Saturday.

U.S. Army Garrison Rheinland-Pfalz officials said Monday that the incident is under investigation.

“At this point, we can confirm that the man in the VW Polo did come to Pulaski Barracks twice, once about midnight and once just before 8 a.m.,” said Jonathan Riley, a spokesman for U.S. Army Garrison Rheinland-Pfalz.

Garrison officials could not say whether the man ever actually gained access to the base.

On Saturday morning, the man — identified as a 61-year-old German from Bad Duerkheim — approached the gate and told security guards he had explosives in his car. That led to a car chase in a construction zone on the A6 Autobahn in the direction of Mannheim along a stretch that essentially serves as a Kaiserslautern bypass. The man was initially pursued by four military police vehicles from the garrison and the U.S. Air Force, Riley said. German police “joined and took the lead in the pursuit within minutes,” he said.

The chase ended when the man crashed his car into a German patrol car as it was trying to pass him on the highway, said Kaiserslautern police spokeswoman Christiane Lautenschläger. Both cars were damaged, but no injuries were reported.

Experts who searched the car found no explosives. The man appeared to be “mentally disturbed,” according to German police, and he was to be hospitalized for psychiatric treatment.

Additional security measures are now in place at the Pulaski gate as a result of the weekend incident, Riley said. The exit lane remains closed, concrete barriers have been set up just inside the gate and incoming traffic is being diverted up the hill toward Outdoor Recreation.

The exit at the shoppette gate remains open.

As for the investigation, officials want “to ensure we have a clear understanding of all the facts and are able to implement any corrective measures or improvements, in the event they are found necessary,” Riley said.

The closure of the A6 led to other incidents Saturday. A 79-year-old man ignored detour signs and sought to continue on to the closed ramp, running over and destroying a warning light. When confronted by police, he said they shouldn’t have put it in the middle of the lane.

Saturday’s incident is the second in about as many months involving an individual deemed by authorities to be mentally disturbed making threats or acting suspiciously at the access point to a U.S. military base in the Kaiserslautern area. In January, a 32-year-old German man from Ludwigshafen left a suspicious package outside Ramstein’s west gate. He was arrested on the spot. The package was later found to contain toys. The incident shut down the gate for about five hours.