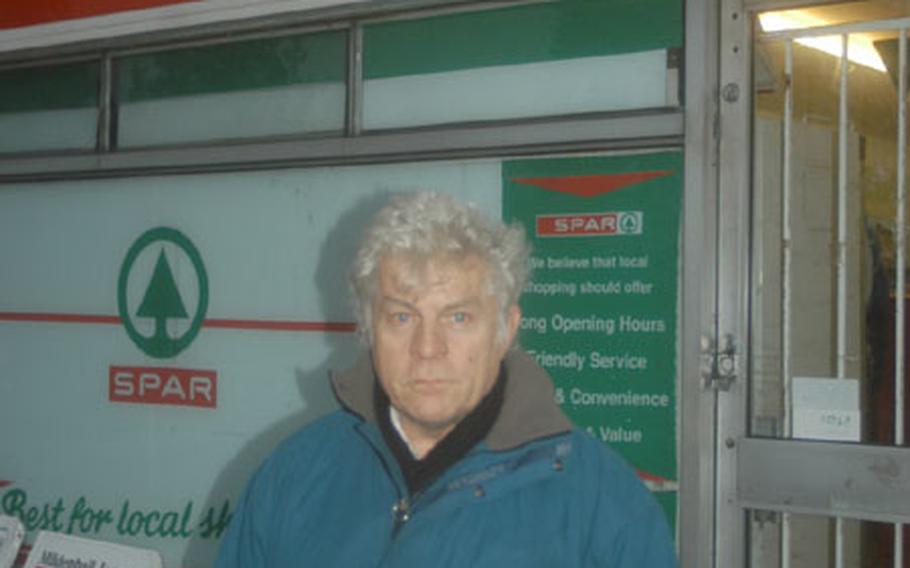 Jeremy Morley&#39;s business outside the gate at RAF Lakenheath, England, will soon close, a victim of the road closures put in place after the Sept. 11 terrorist attacks on America. (Ron Jensen / S&S)

ERISWELL, England &#8212; A shop that has served American servicemembers for decades will soon close its doors, a victim, in effect, of the terrorist attacks on America on Sept. 11, 2001.

Jeremy Morley said his Spar shop just outside the back gate of RAF Lakenheath, England, will close once he has exhausted his current stock.

The closure of two roads for security purposes in the wake of the attacks on America has shifted the traffic flow and cost Morley about 400,000 British pounds in sales in that time. That&#8217;s more than $700,000.

Morley is also the Stars and Stripes distributor in England. He has held that job for 35 years and will continue with it.

Soon after the Sept. 11 attacks, the Ministry of Defence, which owns the air bases used by America in England, closed Lords Walk, a public road that separated the base from the military housing area and connected roads on either side of the base.

It also closed Earl&#8217;s Close, a road into the Anglo Housing Area, a privately owned group of houses leased by Air Force members. Those people now live, essentially, on the base.

Within months, Morley&#8217;s loss of business forced him to lay off all eight of his employees.

Morley said the wall built to block access to the housing area was the real nail in his coffin. The houses are only about 100 yards from his shop, which sells everything from newspapers and greeting cards to brown sauce and pasta.

&#8220;It&#8217;s not convenient for mothers to send their kids down here to get a pint of milk,&#8221; he explained. Children no longer walk past on the way from school, stopping in for candy or soda.

What once was a short walk from the housing area to the store now requires a lengthy route that includes leaving and re-entering the base. Morley said it is more convenient for shoppers to remain on base.

Also, the closure of Lords Walk puts the store three miles farther by road from many British customers who live on the other side of the base.

Maj. Francisco Hamm, spokesman for the 48th Fighter Wing on the base, called the closure of the Spar store &#8220;an unfortunate situation.&#8221;

&#8220;The security measures are taken for a reason,&#8221; said Hamm, who said he has been an occasional customer at Spar.

Morley&#8217;s store is one of several built at the same time outside the gate more than 30 years ago. The complex includes a Chinese food take-away restaurant, a furniture store, a hairdresser and military car sales.

Winnie Jung, who owns the Chinese food shop, said her business is down 40 percent. She has lost most of her customers from the other side of the base because of the closure of Lords Walk.

The other businesses are not as reliant on drop-in customers as Morley and Jung and are not suffering such drastic business losses.

Hamm said it is a shame the businesses are in trouble because of the security measures, but added, &#8220;These are the kinds of things that happen in a world that has completely changed.&#8221;