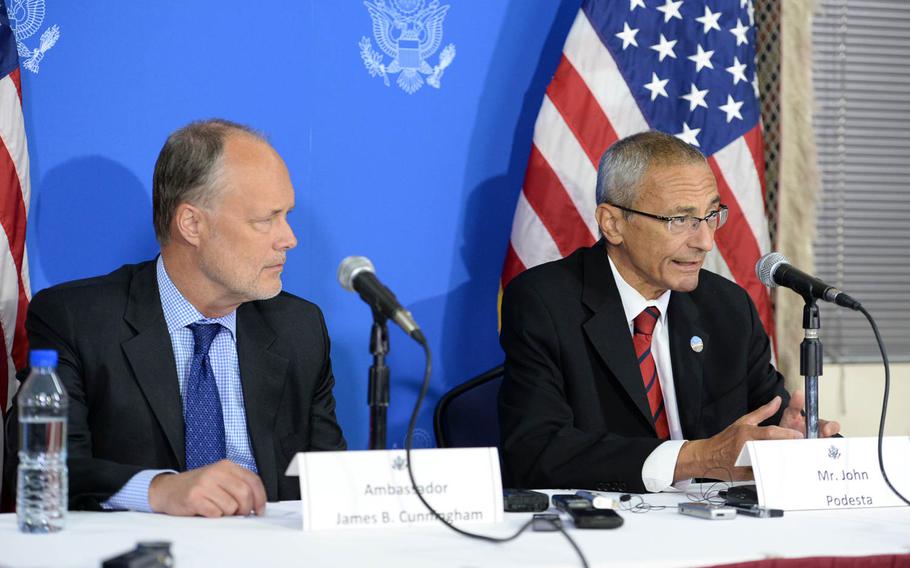 John Podesta, a senior adviser to President Barack Obama, speaks to reporters at the U.S. Embassy in Kabul on Sept. 29, 2014, as U.S. Ambdassador James Cunningham, left, listens. The two had earlier attended the inauguration of the new Afghan president, Ashraf Ghani. Podesta said the Obama administration is looking forward to a new chapter in Afghan-American relations. (Josh Smith/Stars and Stripes)

KABUL, Afghanistan — The top U.S. envoy in Afghanistan said Wednesday that the newly signed security pact with the United States may boost chances for a resumption of peace talks with the Taliban by demonstrating to the insurgents that they cannot hope to achieve a military victory.

“The BSA (Bilateral Security Agreement) is part of a broader strategy to try to encourage the opening of peace negotiations,” Ambassador James Cunningham told reporters.

Cunningham dismissed reports that Islamic State militants, who have overrun large parts of Syria and Iraq, are now trying to establish a presence in Afghanistan. The Afghan media have reported that leaflets calling on Afghans to join the Islamic State, also known as ISIL OR ISIS, have appeared in several provinces in recent days.

“There are definitely al-Qaida and al-Qaida affiliates in Afghanistan; there’s no question about that,” he said. “As to the rumors about some kind of ISIL presence … I haven’t seen any firm reports of evidence of that.”

Cunningham spoke a day after he signed the long-delayed Bilateral Security Agreement with the newly installed government of President Ashraf Ghani. The accord will allow 9,800 U.S. troops — mainly trainers, advisers and counterterrorism teams — to remain in Afghanistan after the end of the current NATO mission at the end of this year and the withdrawal of coalition combat troops.

Also on Tuesday, NATO signed a similar Status of Forces agreement that will allow several thousand NATO advisers to remain in Afghanistan.

While few analysts believe the Taliban could ever retake Kabul or occupy much of the country as they had in the 1990s, only the most optimistic see the Afghan security forces defeating them — something that more than 140,000 U.S. and NATO troops failed to accomplish during the 13-year war.

Cunningham said he expected that both Ghani and Abdullah Abdullah, the government’s chief executive officer, would continue to pursue efforts to open up meaningful peace discussions with the insurgents.

He suggested that the BSA should demonstrate the Taliban’s lack of options.

“The intent is clear, to continue to strengthen the Afghan security forces, which is what the BSA provides for, so that it becomes clear that the Taliban cannot prevail through terror and violence,” he said.

“It’s at that point that … we hope to encourage them to come to the realization that terror is not going to work, is not going to get them what they want and that the way open to them is through a political process through peace negotiations with President Ghani and his government.”

Ghani during his swearing-in ceremony on Monday called for renewed negotiations with the Taliban, a proposal the Taliban immediately rejected.

U.S. officials have praised the performance this year of the Afghan army and police force, which were challenged as never before by the guerrillas. The Taliban mounted a series of attacks nationwide, inflicting heavy casualties on the security forces. But in all cases they were beaten back and failed to hold any urban centers.

“The tenacity and unity displayed by the Afghan security forces — their success, through two elections and protracted political uncertainty — is enormous,” Chairman of the Joint Chiefs of Staff. Gen. Martin Dempsey said Tuesday in a statement following the signing of the Bilateral Security Agreement.

“While they are excellent fighters, their forces are still maturing at the institutional level and our efforts there over the next year will be key to the long-term sustainability of their forces,” Dempsey said.

NATO officials have said that with Afghanistan’s fighting season drawing to a close, the insurgents are expected to return soon to their winter safe havens in neighboring Pakistan. This will give the Afghan army and police a chance to regroup and prepare for next year’s combat.

Signing of the BSA and Status of Forces agreements were delayed for about a year because outgoing President Hamid Karzai refused to sign the former document. One of the reasons he cited was that it would undermine chances for a reconciliation with the Taliban, who have vowed to continue fighting until all foreign forces leave Afghanistan.

In rejecting Ghani’s Monday appeal for peace, a Taliban spokesman reiterated that stance, saying “there will be jihad in Afghanistan until the Americans leave.”