Security is tight in Strasbourg for NATO summit 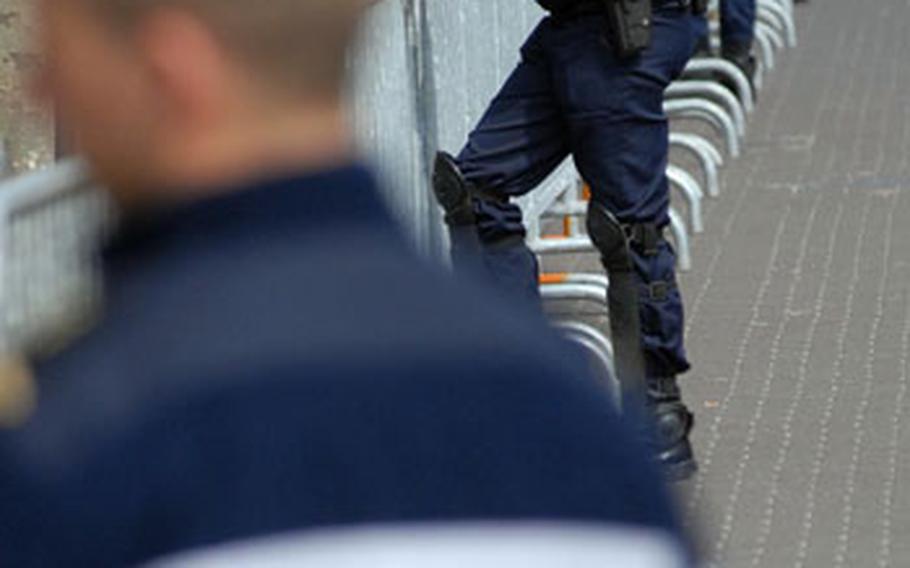 Police line the route that the motorcades of U.S. President Barack Obama and President Nicolas Sarkozy of France traveled down following their meeting in Strasbourg on Friday morning. Much of the eastern French city was blocked off for security reasons, and parking on many of the city streets has been forbidden since Monday. On Saturday NATO leaders are to meet in the city. (Michael Abrams/Stars and Stripes)

Police line the route that the motorcades of U.S. President Barack Obama and President Nicolas Sarkozy of France traveled down following their meeting in Strasbourg on Friday morning. Much of the eastern French city was blocked off for security reasons, and parking on many of the city streets has been forbidden since Monday. On Saturday NATO leaders are to meet in the city. (Michael Abrams/Stars and Stripes) 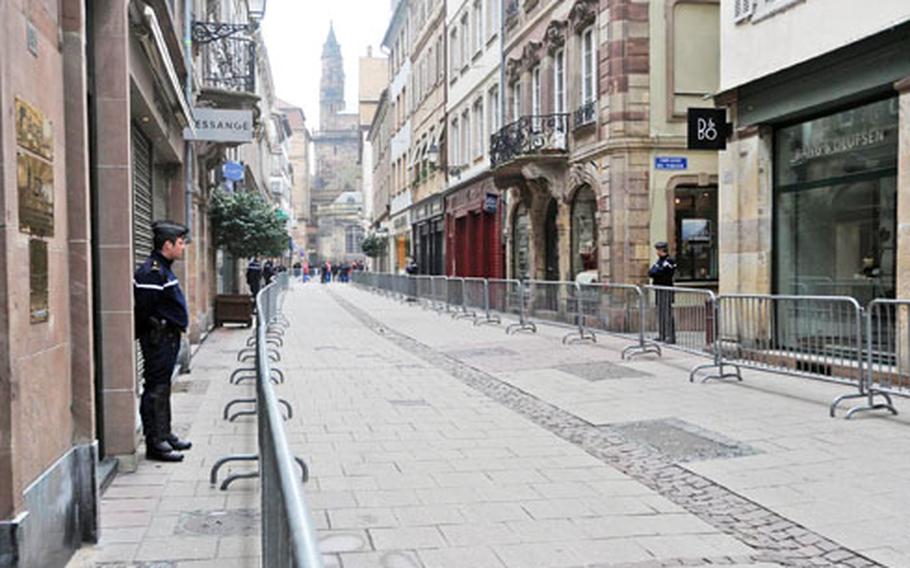 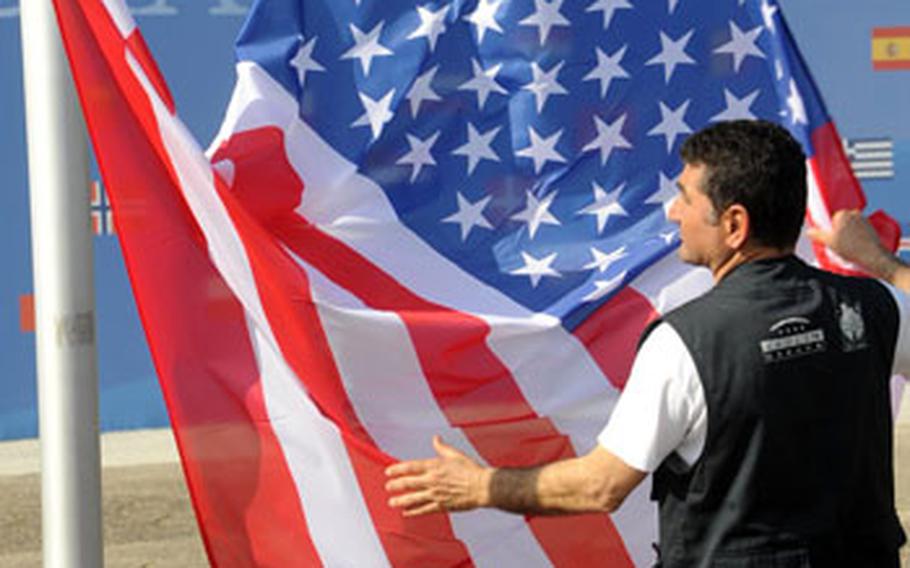 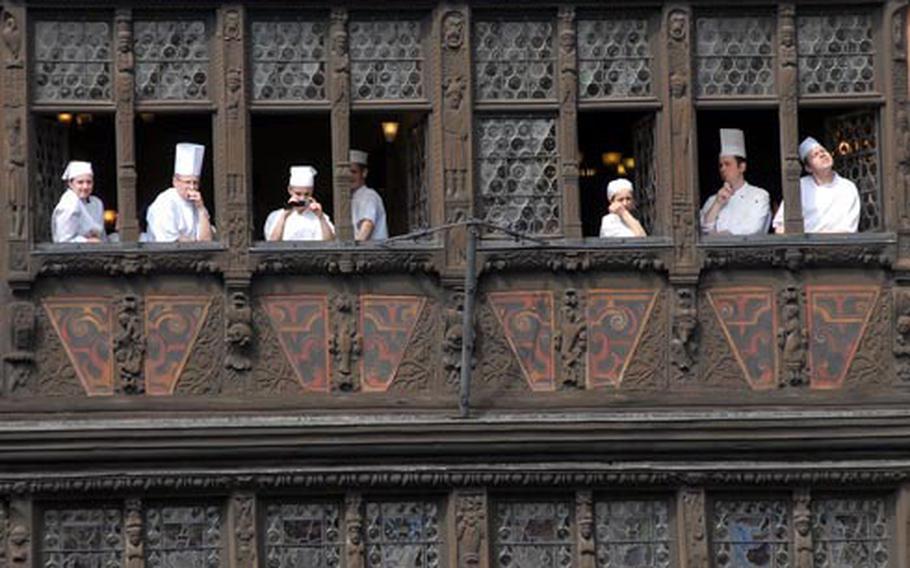 The kitchen staff looks out the windows of the 15th-century Maison Kammerzell on Strasbourg, France&#39;s cathedral square, hoping to catch a glimpse of U.S. President Barack Obama and President Nicolas Sarkozy of France, following their meeting at the Rohan Palace on Friday morning. The crowd lining the square only got to see the presidents&#39; motorcades roll by. (Michael Abrams/Stars and Stripes)

STRASBOURG, France &#8212; For the last day or so, the city center of the Alsatian capital in northeastern France has been, to borrow a military term, in lockdown mode.

With the leaders and delegations of 28 nations arriving this weekend to observe the 60th anniversary of NATO&#8217;s founding, one need not travel very far in Strasbourg to feel the security pinch.

Multiple rings of security exist in and outside of town and security personnel number in the thousands. Many are clad in protective gear, looking for all the world like a cross between a baseball catcher and some futuristic cop.

Special passes are required to move about, miles of barricades have been erected and just about every manhole cover in the city center bears a thin, tar seal to deny unwarranted access. Even residents&#8217; bikes have been tagged with white eviction notices, should they not be wheeled away in time to a safer, more discreet location.

Since the summit is occurring in two countries &#8212; France and Germany &#8212; the staging of the event has been, in the words of a State Department spokesperson, "a logistical nightmare." Aside from the ever-present worry of a terrorist attack, both European hosts have acted in concert to keep anarchists somewhat in check.

At the town hall event, one bespectacled young Frenchman asked Obama what he expects from Europeans with respect to the U.S.-led effort to combat global terrorism. Earlier, Sarkozy had said at a joint news conference the "world doesn&#8217;t boil down simply to American borders and American interests."

Playing off that theme, Obama responded that, besides military action, a multitude of strategies need to be employed. He commended NATO allies for their many contributions, but said terrorists, particularly al-Qaida, are just as likely, if not more so, due to geography, to hit Europe next.

Europe should not expect the United States "to shoulder the burden alone," Obama said. "This is a joint problem and it requires a joint effort."

Access to this event and others was tightly regulated. Many of those at the town hall gathering, for example, were young Europeans attending a NATO-sponsored youth forum.

While some locals were in attendance, a lot of Strasbourg&#8217;s residents opted to stay out of sight, or leave town altogether. Many businesses in the historic city center, a U.N. World Heritage site, posted notices telling customers they would be closed for all or part of the weekend.

Journalists who traveled to Strasbourg to cover the summit worked from a media center a few blocks away from the Palais de la Musique et des Congr&#232;s, the main venue on Saturday. Just a small fraction of the assembled journalists have special passes that afford them access to a particular event.

At the media center they were treated to strong French coffee and rich pastries of the sweet and doughy variety. Organizers even set aside areas for body massages and wine tasting.

"I stayed here until 8 o&#8217;clock last night," a Voice of America correspondent said Friday. "They had a wonderful dinner. Today they have lunch and dinner."