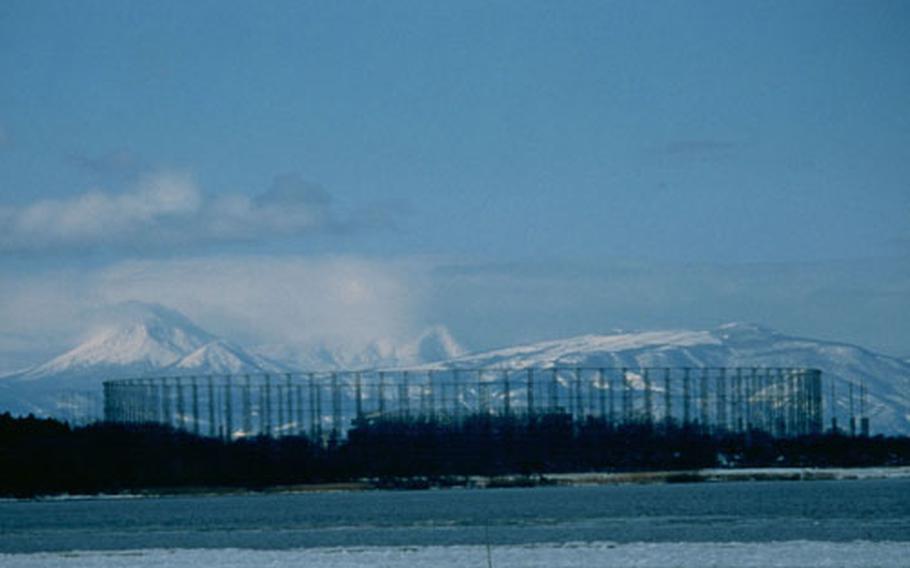 The 39-acre AN/FLR-9 antenna, known as the elephant cage, is the most famous landmark on Security Hill since it was completed in 1965. (Courtesy of MSOC)

As an Air Force watch officer in the massive intelligence center, he worked beside 2,000 people from all services with several hefty threats not far off.

Years later, he now commands a joint mission, with new threats and objectives. Technology has changed, the military has changed and the role of intelligence blossomed. But the job remains the same: intelligence, surveillance and reconnaissance.

On a hill near Misawa Air Base, surrounded by satellite domes and massive antennas, the Misawa Security Operations Center has served a silent role for 50 years as an intelligence center.

The center uses any available intelligence: satellite, space and radio frequencies, and human intelligence, among others.

The servicemembers who work there can&#8217;t celebrate their victories. They quietly work behind the scenes, developing and processing war-preventing information.

The center collects and disseminates information to Misawa&#8217;s 35th Air Wing &#8212; and also any ship, plane, agency or command that needs it.

The post is not limited to any specific area. It creates situational awareness anywhere in the Pacific using an intricate network of communication and all available information.

The job is part science and part art, analyzing what is seen, Gortler said.

Security Hill was the first U.S. presence in Misawa, before an air base was established there. At the time, communications around the world went point to point, so Misawa&#8217;s geographic location was essential, said Lt. Col. Mark C. McLaughlin, deputy commander of the 373rd Intelligence Group, the Air Force component of the operations center.

The post has evolved in sync with world affairs and military needs. Since the end of the Cold War, the center&#8217;s staff dropped in half, but some of that is due to streamlining and merging the four services, McLaughlin said.

When Gortler worked in Misawa years ago, the services worked distinctly. Today, they are fully integrated. Each provides its best attributes for the good of all, in accordance with the Defense Department&#8217;s emphasis on consolidation.

Today there are 900 people working on Security Hill from all four services and the civilian world. They serve a list of commands: local, regional, Pacific and Continental United States.

The servicemembers working there &#8212; logisticians, engineers, intelligence specialists, communicators and information managers &#8212; are the top test scorers entering the service. Half are under 25 years of age.

As commander, Gortler rarely has to address discipline. His staff is dedicated and excited, even if they can&#8217;t always write home about their jobs.

Gortler hopes the 50th anniversary celebration, and the meaningfulness of their mission is just compensation.