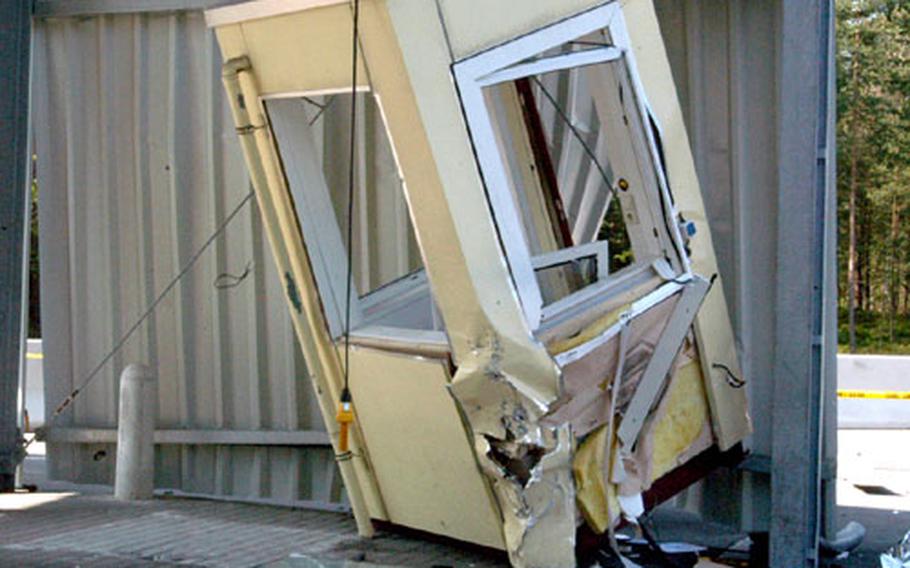 GRAFENW&#214;HR, Germany &#8212; A Pond Security Service employee at the Grafenw&#246;hr Training Area was killed Saturday when a vehicle driven by a U.S. civilian crashed into a gate guard station at high speed, base officials said Sunday.

According to 100th Area Support Group spokeswoman Kathy Gibbs, Pond guard Alexander K. Schieder, 20, a German national, was in the guard&#8217;s booth at Gate 6 at about 6:15 p.m. when a Volkswagen van driven by James W. Broyles, 47, ran into it.

Rescue personnel pronounced Schieder dead at the scene, and Broyles was treated for minor injuries at a hospital in nearby Weiden, Gibbs said.

Though details about the cause of the accident were unavailable Sunday, evidence at the scene showed that Broyles&#8217; van broke through a vertical concrete post and knocked the guard shack several feet backward on its way through the gate, also destroying the drop-arm barrier at the station.

Gate 6 at Grafenw&#246;hr is on a curve at the end of a long, straight lead-up road in a forested area. It will remain closed until further notice, Gibbs said.

Additional details about the crash and investigation will likely be available from military officials on Monday, she said. German investigators assigned to the case from the Weiden police station were unavailable for comment Sunday.