Security forces take on first patrols of key base at Bashur During a five-hour patrol of the area around Bashur Airfield in northern Iraq, an Air Force security force patrol alternated between driving various pre-determined routes and stopping for brief periods to demonstrate a show of force in the vicinity. Whenever the patrol stopped, Airman 1st Class Jayson Gassler would man the squad automatic weapon, or SAW, against any possible enemy. (Kevin Dougherty / S&S)

During a five-hour patrol of the area around Bashur Airfield in northern Iraq, an Air Force security force patrol alternated between driving various pre-determined routes and stopping for brief periods to demonstrate a show of force in the vicinity. Whenever the patrol stopped, Airman 1st Class Jayson Gassler would man the squad automatic weapon, or SAW, against any possible enemy. (Kevin Dougherty / S&S) 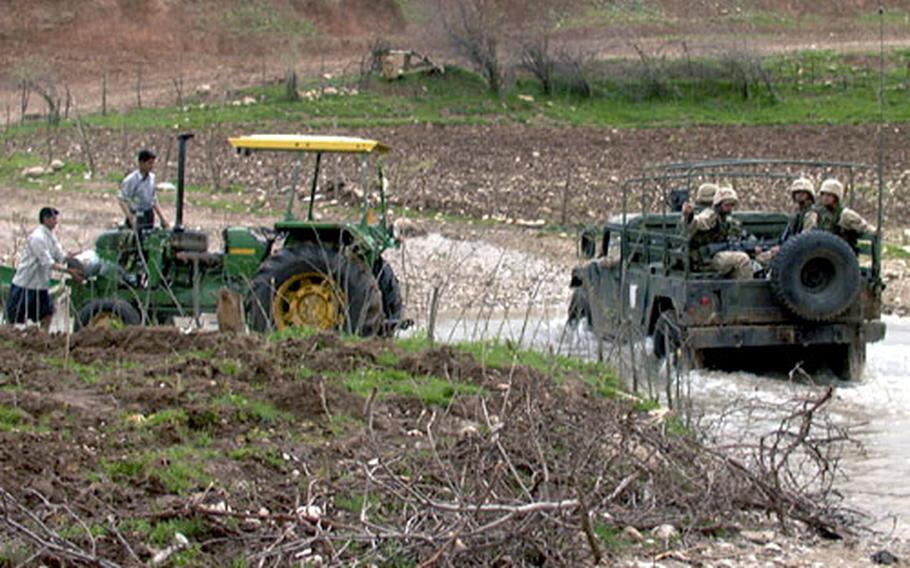 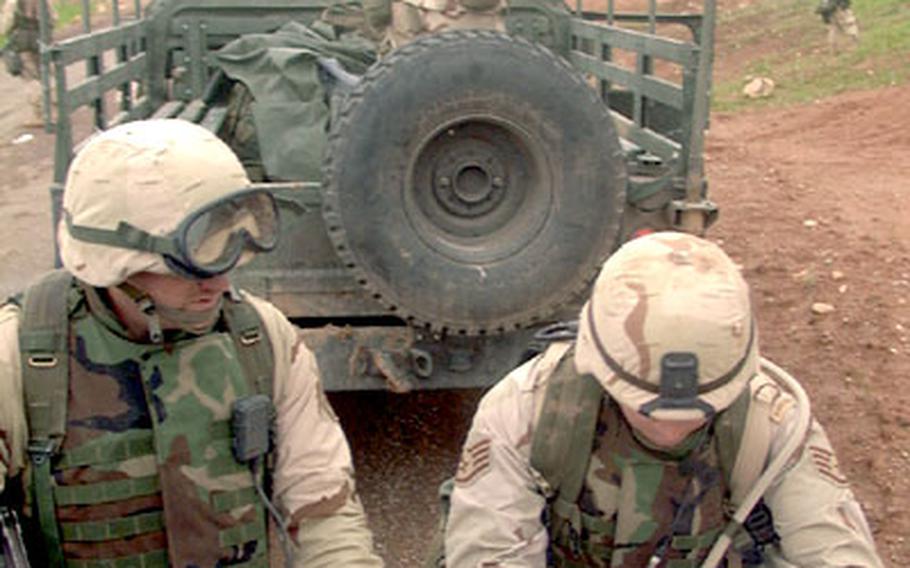 Air Force Sgt. Jason Fields, left, and Staff Sgt. Damian Spaits survey a map of the area around Bashur Airfield in northern Iraq. Security forces are validating the maps in hand with what they see on the ground. Many of the maps are nearly as old as some of the airmen deployed to Bashur in support of Operation Iraqi Freedom. (Kevin Dougherty / S&S)

BASHUR, Iraq &#8212; At midday Wednesday, halfway into the Air Force&#8217;s first regular mounted patrol of the surrounding countryside, a radio report from home base alerted the squad to a suspicious car lurking near one of the gates to the airfield.

The nine-member patrol, headed by Air Force Staff Sgt. Damian Spaits, wasn&#8217;t in the immediate vicinity, but it took note and kept a watchful eye out for the suspect car. The five-hour watch passed without another sighting.

&#8220;There are different ways to do the [security] mission,&#8221; said Spaits, who parachuted into Bashur airfield with Army paratroops two weeks ago. &#8220;You could circle the wagons or be a beehive of activity.&#8221;

The squad members&#8217; focus on this maiden patrol was to familiarize themselves with the environs and to update their maps, which are nearly as old as some of the airmen defending the base. This patrol and others that will follow are also intended to let the locals know the U.S. military isn&#8217;t going to hunker down and, well, circle the wagons.

That means stepping outside the fence line with regularity to make new friends and influence old enemies.

Riding along in Ziemer&#8217;s vehicle is Edouard Green and Amber Jamerson, both airmen first class. Green, 21, joined the Air Force after the terrorist attacks on Sept. 11, 2001. Jamerson, 20, also is new to the military.

Also on patrol are Sgt. Jason Fields, Airmen 1st Class Ed Crofoot, Jayson Gassler and Shawn Rankins and Airman Dennis Hock. Except for Spaits, who is from Sembach, Germany, the rest of the patrol normally is assigned to the 100th Security Forces Squadron at RAF Mildenhall, England.

For most airmen in the patrol, this was the first opportunity to glimpse local life beyond the airfield perimeter. A year ago, the thought of operating inside Iraq would have seemed improbable.

As events unfolded earlier this year, the airmen figured they were headed for the desert. Instead, they find themselves in the fairly lush, mountainous region of northern Iraq.

The airfield accommodations, albeit sparse, also surprised them.

At an earlier stop, Spaits was comparing notes with Fields when a small, red car tooted its horn and pulled onto the shoulder just beyond the parked patrol. In contrast to the tepid reception in southern Iraq, U.S. forces in the north have been warmly greeted by Iraqi Kurds.

But one growing concern of allied forces has been suicide attacks and car bombs. Spaits believes it&#8217;s important to balance force protection with community outreach, but the presence of a strange car in their midst raised the patrol&#8217;s posture to guarded, but receptive.

Moments later, Sobhan was flashing a broad smile as someone snapped a couple of shots of him and Spaits standing shoulder to shoulder.

The slightly built man, who had been studying English in nearby Irbil, said he hates Iraqi leader Saddam Hussein. When he was 7 months old, Iraqi police spirited his father away. He hasn&#8217;t been seen since.

U.S. forces would love for the war to end so they can go home. Until then, they&#8217;ll extend a hand to the liberated, but keep the other near the trigger of their M-16.