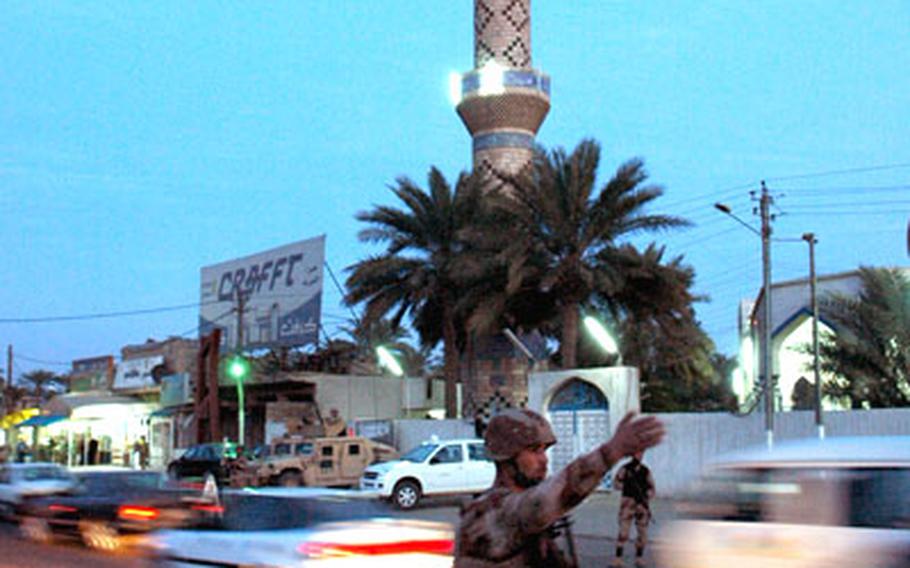 An Iraqi army soldier holds a security perimeter around a prominent Sunni mosque in a Baghdad neighborhood. (Andrew Tilghman / S&S)

BAGHDAD &#8212; Inside his operations center in an ornate but dilapidated palace near the city center, Capt. Amjet, an Iraqi army intelligence officer, has a stack of satellite maps of his sector that includes the affluent neighborhoods surrounding the heavily fortified Green Zone.

One map marks local schools; another pinpoints vital public utilities. But one map hangs in the center of the room and has proven to be the most important during the past several weeks.

&#8220;Now, the mosque map is out all the time,&#8221; the burly Iraqi officer said, pointing to the large gray image peppered with red dots highlighting the dozens of holy sites in the downtown area.

More than three weeks after the Feb. 22 bombing of a large Shiite holy shrine in Samarra, the attention of U.S. and Iraqi army soldiers around Baghdad is focused largely on the mosques of downtown Baghdad, an ongoing precaution to prevent a new attack that could further inflame the country&#8217;s sectarian tensions.

For much of that time, Iraqi soldiers have been working overtime to keep watch on the city&#8217;s holy sites.

The extra effort to secure the country&#8217;s holy sites reflects a major shift in the daily mission for the U.S. troops and the Iraqi forces they oversee in Baghdad. The biggest threat to security may no longer be an anti-American insurgency, but the spike in inter-Iraqi violence, raising the specter of full-scale civil war.

Increasingly, the Sunni-led insurgency is striking domestic targets such as the Ministry of Interior, which some say is infiltrated by Shiite militias and death squads. The head of the ministry, who is a Shiite, avoided an assassination attempt when his convoy was attacked last week. Two of his bodyguards were killed.

&#8220;They used to target the American patrols and convoys. But now, there are different kinds of attacks; they are attacking the (Ministry of Interior) and government officials,&#8221; said an Iraqi army commander who asked that his name not be printed.

&#8220;To me, they are too blended together to distinguish. The insurgency has sectarian and political lines. I can&#8217;t distinguish between the two,&#8221; Bunner said.

The spike in sectarian violence comes as U.S. troops are depending more heavily than ever on the Iraqi army to serve as the primary security force and intelligence provider in the densely populated neighborhoods in downtown Baghdad.

The attention that the largely Shiite army unit has devoted to the area&#8217;s large Sunni mosques has reassured many residents that the army remains above the sectarian fray. A truckload of Iraqi soldiers on a recent patrol in the affluent Kadasia neighborhood stopped and surrounded a large mosque compound, where soldiers spread out and watched traffic pass before the tall minaret and the blue-domed holy site.

After about one hour, the Iraqi patrol moved to another mosque and later set up a checkpoint near a mostly Sunni political party headquarters building. Several residents said they were pleased to see the Iraqi army in their neighborhood.

&#8220;It is very good to see them here because there is a very bad situation in Iraq and this will help calm the situation,&#8221; said an Iraqi man who passed by the Iraqi army security patrol as he walked to a corner market in the Kadasia section.