The weekly Friday bazaar at Bagram Air Base, like this one on March 18, has been closed for three weeks after rocket attacks on the Afghanistan base sparked security concerns. (Michael Abrams / S&S)

The weekly Friday bazaar at Bagram Air Base, like this one on March 18, has been closed for three weeks after rocket attacks on the Afghanistan base sparked security concerns. (Michael Abrams / S&S) 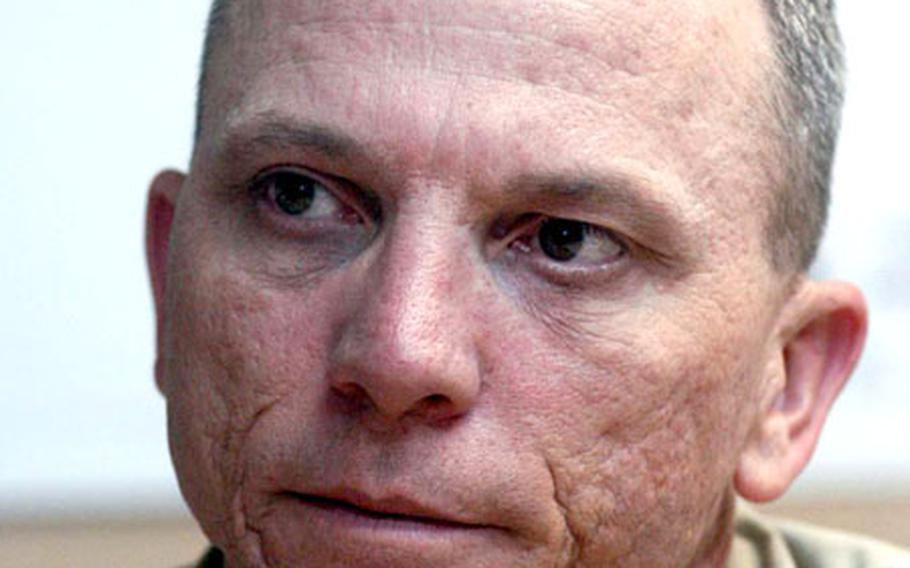 Col. Robert Algermissen, commander of base operations at Bagram Air Base, Afghanistan, says the weekly bazaars will not resume until base security concerns are alleviated. (Michael Abrams / S&S)

BAGRAM AIR BASE, Afghanistan &#8212; A pair of rocket attacks last month caused only minor damage on base.

And no one was injured.

But the damage to the local economy might be a bit more severe: The weekly bazaar on Bagram Air Base has been canceled until the security situation improves.

&#8220;Security for the installation equates to economic stability for everyone around here,&#8221; said Col. Robert Algermissen, commander of Task Force Eagle, the equivalent of a base support battalion.

When a bazaar is canceled, a local village could lose about $200.

&#8220;If they don&#8217;t know who fired the rockets at us, they certainly ought to,&#8221; Algermissen said, noting the local culture revolves around tight-knit communities where everyone knows what everyone else is doing. And strangers stand out.

So humanitarian assistance programs at Shindand in western Afghanistan have been temporarily shut down as well.

They&#8217;ll resume if local citizens help apprehend those who have been launching attacks on the base there.

Friday marked the third week in a row that the bazaar was canceled at Bagram.

So local merchants are out thousands of dollars and most local villages have lost money as well.

Villages normally receive the entry fee a merchant pays in order to participate in the bazaar. Each of the 100 or so villages near the base receives the money on a rotating basis. Village elders access the money after telling the local governor how they plan to spend it.

Algermissen said that when the bazaars operate, they benefit merchants, villages and servicemembers.

And many of those who do get off base don&#8217;t have the opportunity to shop for local goods.

Merchants offer a variety of products made from wood, stone, metal and fabric. Bootleg DVDs featuring American TV shows and groups of movies for only a few dollars, are also popular.

Algermissen said a determination would be made in a few days on whether the bazaar will be held next week.

A suspect for the first rocket attack has been identified.

And another village determined where the second attack occurred.

But he said if security concerns aren&#8217;t alleviated, the bazaar would still be on hold.

During a previous rotation, the bazaars were put on hold for more than three months.

So servicemembers might have to start rationing their DVDs.