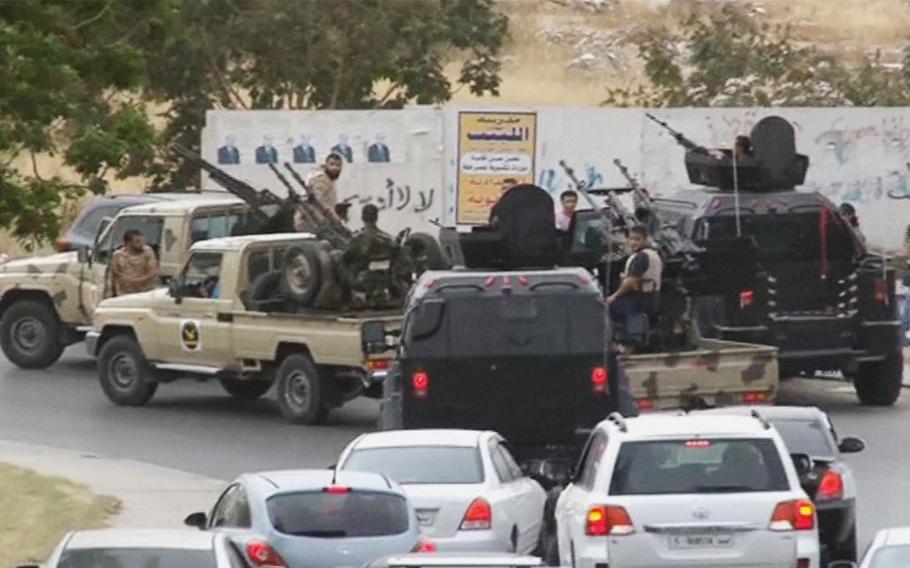 In this image made from video provided by the Libyan national army via AP Television, vehicles with heavy artillery of the Tripoli joint security forces move closer to the parliament building after troops of Gen. Khalifa Hifter targeted Islamist lawmakers and officials at the parliament in Tripoli, Libya, Sunday, May 18, 2014. Forces loyal to a rogue Libyan general attacked the country's parliament Sunday, expanding his eastern offensive against Islamists into the heart of the country's capital. (Libyan national army)

STUTTGART, Germany — NATO is ready to provide training support to Libyan security forces, but turmoil in the country has prevented those efforts from moving forward, NATO’s top civilian official said on Monday.

“Unfortunately, we’ve had some difficulties in engaging with the Libyan authorities, also because of instability and lack of security in Libya,” NATO Secretary General Anders Fogh Rasmussen told journalists.

Over the weekend, a militia group attacked the Libyan parliament building, and on Friday, members of the same group attacked Islamist militias in Benghazi in which authorities said 70 people were killed, The Associated Press reported.

“Once the Libyan authorities are ready to engage with us in a way that also ensures a safe environment for our assistance, we are ready to assist Libya to develop their security sector as requested,” Rasmussen said.

Last year, NATO received a request for support from Libyan authorities focused on helping the country develop its security sector. U.S. Africa Command has similar plans in the works.

Since the fall of strongman Moammar Gadhafi in 2011 following a NATO-led air bombardment, Libya has become a virtual failed state as government authorities struggle for control with heavily armed militias. Concerns also are growing over Libya serving as a haven for Islamic militants, many of whom are believed to be armed with weapons from the old Gadhafi regime.

NATO jets flew nearly 10,000 strike missions during the intervention in 2011, destroying about 6,000 military targets. Although at the time Rasmussen hailed the campaign as “one of the most successful in NATO history,” the situation in Libya never normalized and in recent months has further deteriorated amid bloody clashes between militia and government forces. In 2012, four Americans, including Ambassador Christopher Stevens, were killed during an attack on a U.S. diplomatic facility in Benghazi.

Soon after that, the Pentagon based a newly formed Marine Air-Ground Task Force Crisis Response team in Morón, Spain. The unit, which was moved last week to Naval Air Station Sigonella in Sicily, was formed to better protect diplomatic facilities in Africa.

U.S. officials have not named Libya as the reason for moving the task force to Sicily, but some news reports have stated that the mobilization is connected with safety concerns at U.S. Embassy facilities in the country.

Saudi Arabia recently announced it would be closing its embassy in Tripoli. There has been no announcement that the U.S. will follow suit.