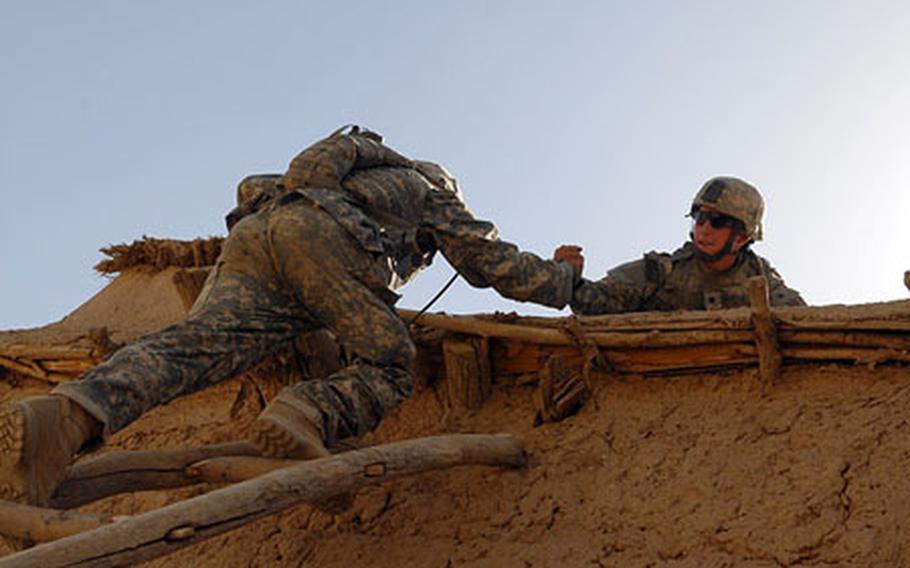 It wasn&#8217;t the sort of reception Pfc. James Papadakis was used to.

After battling their way up and down the notorious Helmand River Valley &#8212; through minefields, narrow mountain passes and vast narcotic poppy fields &#8212; Papadakis and the rest of the 1st Battalion, 508th Parachute Infantry Regiment had grown used to welcomes of Taliban gunfire.

But when Company A paratroops rolled into the dusty village of Sorkhagan, the only hostile noise was the gravelly bark of a graying guard dog.

The visit by the 4th Brigade, 82nd Airborne Division unit was part of a battalionwide operation aimed at disrupting enemy supply and communication lines in Zabul province, an area some 30 miles from the lawless Pakistan border. Their goal was to reduce the frequency of Taliban attacks on Afghanistan&#8217;s Highway One &#8212; strikes that have left tractor trailer rigs in flaming ruins and melted vast patches of asphalt along the barren highway.

The battalion traces its lineage back to World War II, when it jumped into Normandy and Arnhem during Operation Market Garden. Today, the battalion serves as a tactical reserve force and is dispatched to hot spots throughout southern and eastern Afghanistan.

Much of that contact was in the Helmand River Valley, where troops were called on to clear a dirt roadway connecting Highway One to Kajaki Lake. The route is notorious for mine and small arms ambushes, and the area&#8217;s provincial reconstruction team hopes one day to transport an enormous, multimillion-dollar power generator to a hydro-electric dam on the lake.

&#8220;They can&#8217;t get that thing up there because whenever anyone goes up there, they get attacked,&#8221; said one officer. &#8220;People won&#8217;t say this, but the whole goal in Helmand province is to get things established to the point that they can get that generator up there and give people electricity.&#8221;

The campaign centered on a series of battles in which a Chinook helicopter was shot down minutes after dropping off several dozen troops, and skirmishes in which many younger members of the 1-508th got their first taste of combat.

Such was the case for Pfc. Jeremy Cook, 28, of Golden, Colo., who found himself and his squad members pinned down in a drainage ditch in the town of Sangin.

Cook and his fellow paratroops were searching for Taliban gunmen who had fired on their command post earlier that morning of April 5. Cook had crawled to the top of the ditch when his group began taking fire from several sides.

Two bullets slammed into the chest plate of Cook&#8217;s platoon sergeant and into the chest of another soldier &#8212; who survived &#8212; while the earth directly in front of Cook exploded as he lay in the prone position.

&#8220;When the ground started exploding I put my head down,&#8221; Cook said. However, the soldier was startled when he felt his head lifted off the ground and snapped backward. An enemy round had struck the top of his helmet, leaving a ragged tear in the Kevlar.

A number of the firefights took soldiers into the cloyingly sweet-smelling fields of poppies that fill the valley.

&#8220;People started to worry when they saw us in the poppy fields. They didn&#8217;t know what we were going to do. When they saw that we weren&#8217;t destroying them, they relaxed. You can&#8217;t just eradicate them without providing conditions for these people to make an income doing something else. That would just cause more problems.&#8221;

Aside from scattered fields of marijuana, and odd reports of Taliban activity in the mountains surrounding Sorkhagan, the company found little of the excitement it had encountered in Helmand.

Instead, much of their work focused on providing security for two widely attended shuras, or public gatherings, in which Zabul&#8217;s provincial governor urged village elders and younger men to reject the Taliban and embrace Afghanistan&#8217;s new government.