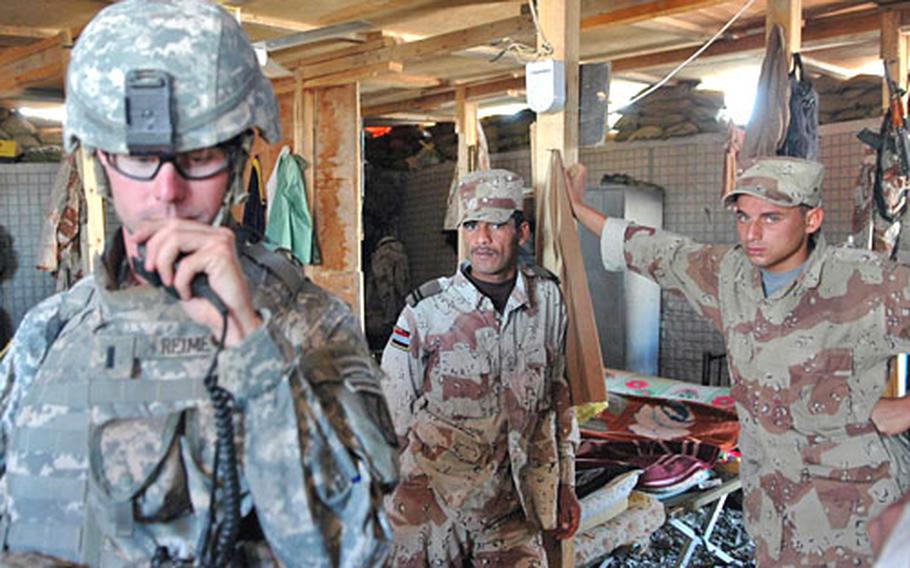 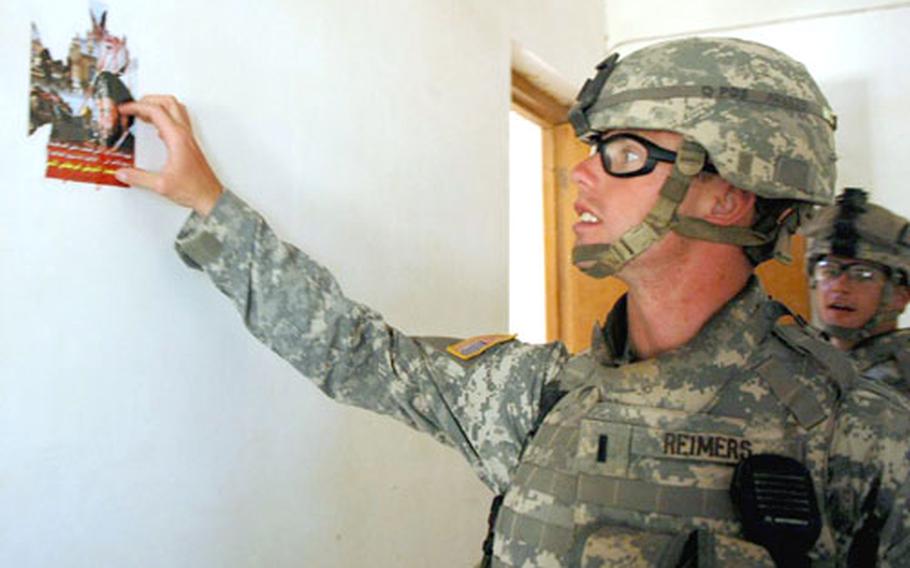 First Lt. Seth Reimers points to a recently posted picture of Shiite leader Muqtada Al-Sadr at an Iraqi army checkpoint in Mahmudiyah, Iraq. The Iraqi soldiers said the photo was put up by the house&#39;s previous occupants, a claim that got a laugh from Reimers. (Anita Powell / S&S)

And, as 1st Lt. Seth Reimers notes dryly, people are constantly trying to kill him.

With less than a month in Iraq under his belt, the 24-year-old platoon leader from the 10th Mountain Division&#8217;s Company A, 2nd Battalion, 15th Field Artillery Regiment already views his mission of working day-to-day with Iraqi troops at local checkpoints with the weariness of a combat veteran.

However, on a recent patrol earlier this month, things appeared calm. Iraqi soldiers at the area&#8217;s varied checkpoints manned the checkpoints diligently, duly reported the occasional attack or roadside bomb and &#8212; in what has sort of become the Iraqi army&#8217;s schtick &#8212; complained bitterly about the army&#8217;s lack of logistical support while assuring American soldiers that the area was safe.

But their wide smiles and assurances, Reimers said, hide an uglier truth.

As if to illustrate, a group of Iraqi army soldiers, who were standing less than 100 feet away from a well-known camp for the radical Shiite Mahdi militia, told a visiting reporter that the encampment was, in fact, a village for the elderly and indigent.

Hassan, who is from predominantly Shiite southern Iraq, said he supports the militia&#8217;s mission to rid Iraq of Sunnis, but denied being a member of the militia.

Another soldier, who said his name was Lt. Haider, 26, then made a claim so ludicrous that even other Iraqis smirked.

When asked if he was a member of a sectarian militia, he looked away.

When asked about the militia&#8217;s charismatic leader, he echoed many Shiites&#8217; blind devotion for the Baghdad-based radical firebrand who has exhorted his followers to kill American forces and Sunnis.

At another, more rural checkpoint, Capt. Baha, 33, bluntly laid out the area&#8217;s dynamics.

Meanwhile, he said, the Iraqi army is crippled by corruption and logistical problems. When Reimers asked him about a shipment of winter uniforms and new equipment, Baha smiled bitterly.

It was quiet as Reimer and his platoon rolled back into Forward Operating Base Mahmudiyah hours later, untouched.