Secretary of state to North Korea: America is ‘not your enemy’ 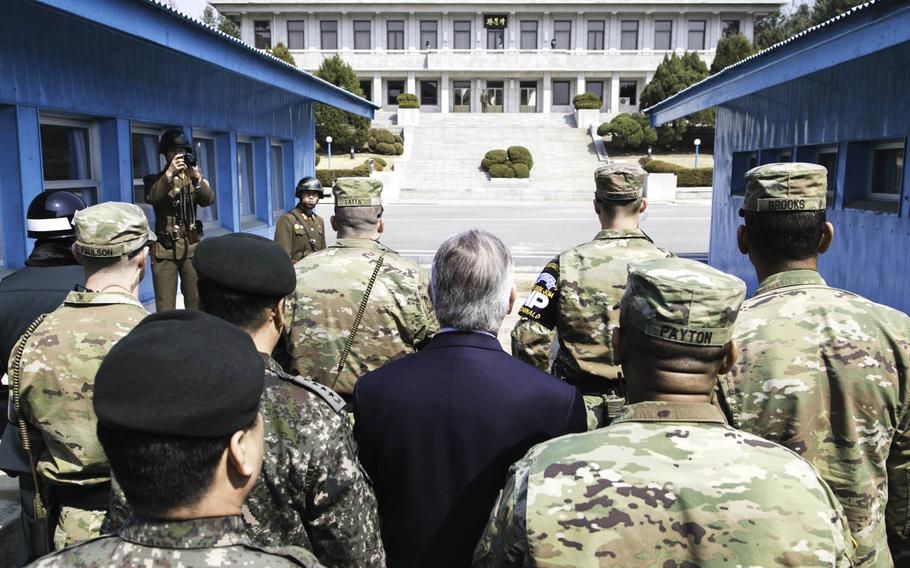 In comments aimed at North Korea, Secretary of State Rex Tillerson said the U.S. does not seek to topple the communist regime but must respond to its “unacceptable threat.”

Tillerson, who added he hoped to “sit and have a dialogue” with Pyongyang at some point, made the remarks Tuesday during a State Department briefing in Washington just days after the North test-fired its second intercontinental ballistic missile.

North Korean leader Kim Jong Un boasted that late Friday’s launch of a Hwasong-14 missile proved Pyongyang was able to carry out a surprise attack with weapons that could reach “all across the continental U.S.”

North Korea’s foreign ministry said Tuesday that America should “wake up to the reality” that Pyongyang has reached a new high and “act with discretion,” according to the state-run Korean Central News Agency.

Meanwhile, Sen. Lindsey Graham, R-S.C., said President Donald Trump told him “there will be a war with North Korea over their missile program if they continue to try to hit America with an ICBM.”

“He has told me that,” Graham said in an interview Tuesday on NBC’s “Today” show. “I believe him, and if I were China I would believe him, too, and do something about it.”

The senator, who added the situation forces Trump to choose between regional stability and homeland security, insisted any war to stop Kim would not happen on U.S. soil.

“If thousands die, they’re going to die over there and they’re not going to die here, and [Trump] told me that to my face,” Graham said.

In a statement issued shortly after Friday’s launch, Tillerson said the U.S. “will never accept a nuclear-armed North Korea nor abandon our commitment to our allies in the region.”

The secretary of state also suggested that China and Russia should do more to rein in their communist ally.

“As principal economic enablers of North Korea’s nuclear weapon and ballistic missile development program, China and Russia bear unique and special responsibility for this growing threat to regional and global security,” he said.

Trump took to Twitter Saturday to say he was “very disappointed” in how China has handled Pyongyang.

“They do NOTHING for us with North Korea, just talk,” he wrote. “We will no longer allow this to continue. China could easily solve this problem!”