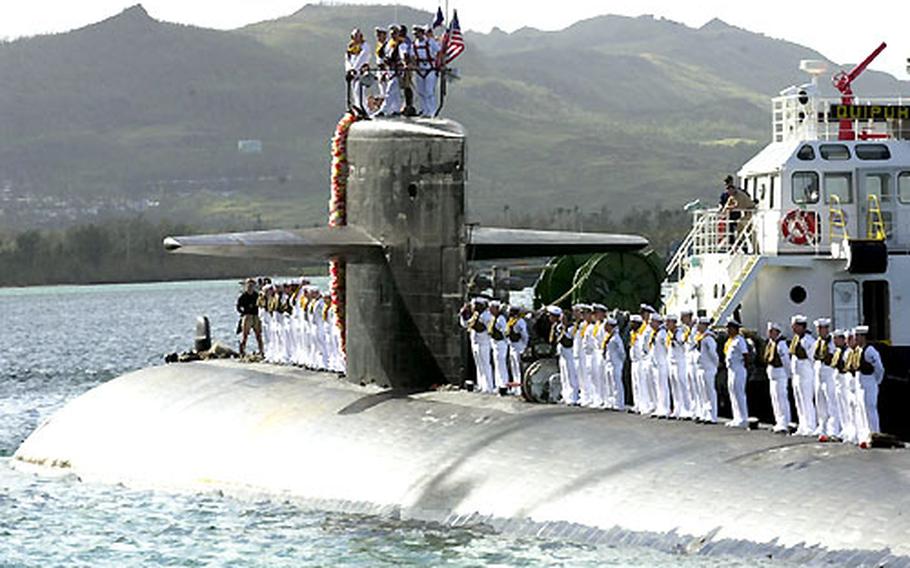 The USS San Francisco and her crew pull into the submarine’s new port of Apra Harbor, Guam, on Wednesday. (Jason Carter / S&S)

The USS San Francisco and her crew pull into the submarine’s new port of Apra Harbor, Guam, on Wednesday. (Jason Carter / S&S) The USS San Francisco pulled into Polaris Point under clear skies, which only a week ago were smudged with black smoke from a typhoon-triggered Mobil fuel tank fire.

The Los Angeles class San Francisco is the second of at least three submarines to comprise Submarine Squadron 15. The third submarine has not been named and is expected in Guam in spring 2004.

After the San Francisco docked beside its tender, the USS Frank Cable, 140 men poured onto the pier. Some embraced wives and kids while single sailors made a beeline for the pay phones to call family and friends.

Family members who accompanied the San Francisco submariners to Guam arrived in August and September to set up their new homes.

The San Francisco departed Oct. 21 and arrived in Apra Harbor as scheduled, 10 days after Super Typhoon Pongsona ravaged much of the island Dec. 8.

Capt. Joe Mulloy, commander of Submarine Squadron 15, said the ship followed the storm&#8217;s path on the Internet by rising to periscope depth and raising its antenna.

Spouses who endured the storm without their husbands said they tried to make the best of an otherwise trying situation and relied on each other for support.

Friends Kimberly Brinkman, 26, Sara Kilgore, 22, and Cherie Calvert, 21, stayed in Brinkman&#8217;s base housing near the Naval Computer and Telecommunications Station during and after the typhoon.

Brinkman said without power and running water, &#8220;it was like camping: We washed our clothes in buckets.&#8221;

Despite their resolve, the typhoon rained on homecoming plans for their husbands.

Brinkman was disappointed not to decorate the pier with balloons and banners; Kilgore wanted a clean house &#8220;that smelled nice.&#8221;

&#8220;I was just there for the first time yesterday to clean out the refrigerator. It smells like bad food,&#8221; she said.

Brinkman and her friends said they didn&#8217;t resent that their husbands were gone during the storm but some sailors expressed guilt.

The San Francisco and the USS City of Corpus Christi, which home-ported in Guam in October, track and hunt enemy submarines and ships.

Before arriving in Guam, the San Francisco trained in an underwater tracking range off Southern California with a submarine preparing to deploy to the Middle East, Mulloy said.

The ship shot four torpedoes, one at an aircraft carrier, the others at simulated submarine targets. The training torpedo is designed to go underneath the carrier, Mulloy said.

The submarine underwent a two-year overhaul in Norfolk, Va., shipyards before departing for Guam. It received new hardware including a core, electrical systems and radios, Mulloy said.

Commander Pacific Fleet and Commander Submarine Pacific are evaluating whether to bring more than three submarines to Guam, Mulloy said.

The submarine tender USS Frank Cable can host four submarines along its sides while its repair department can fix up to eight submarines, Mulloy said.

The move to Guam could double the mission days for the submarines without the need to cross the Pacific Ocean.

Mulloy said it typically takes eight days for a submarine to travel to Guam from Hawaii, and two weeks from San Diego.

Mark Oliva contributed to this story.