Second phase of Osan mall project is under way 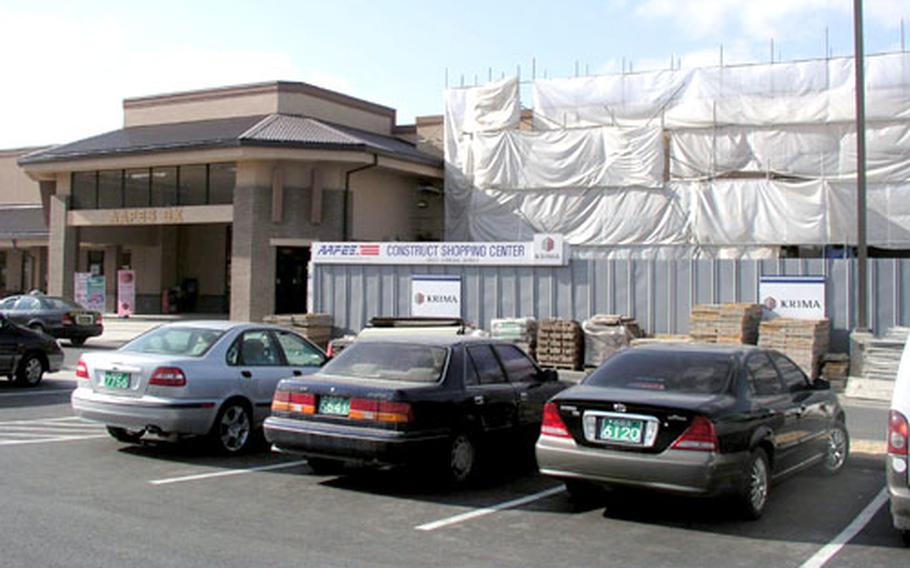 Plastic sheeting and scaffolding mark the site of a new post office under construction at Osan Air Base. The post office will be part of the recently opened Osan Shopping Mall, seen at left, the U.S. military&#39;s largest shopping center in South Korea. (Franklin Fisher / S&S)

Plastic sheeting and scaffolding mark the site of a new post office under construction at Osan Air Base. The post office will be part of the recently opened Osan Shopping Mall, seen at left, the U.S. military&#39;s largest shopping center in South Korea. (Franklin Fisher / S&S) OSAN AIR BASE, South Korea &#8212; The U.S. military&#8217;s biggest shopping center in South Korea is well into its second and final stage: construction of a parking lot and post office set to open this spring at Osan Air Base.

The project&#8217;s first phase was to conclude this week, with the opening Thursday morning of the food court&#8217;s last scheduled concession: a Subway sandwich shop. Outlets already operating in the food court include Captain D&#8217;s, Pizza Hut and Charley&#8217;s Steakery.

&#8220;Subway is just what I call our finishing touch to our food court,&#8221; said H. Lee Holloway, central exchange manager for the Army and Air Force Exchange Service at Osan Air Base. &#8220;It&#8217;s the cherry that we put on top of the ice cream sundae. It was the finalizing part of what we call Phase I.&#8221;

The parking lot, started in January, is to be finished at the end of April, Holloway said. The post office, on which construction started in November, is to open sometime from the &#8220;end of April to beginning of May,&#8221; he said.

The parking lot will provide 104 parking spots for mall patrons, on a site just yards across from the mall and on a tract of ground slightly higher than the mall itself, one Holloway calls the mall&#8217;s &#8220;second level.&#8221;

A ramp will be built to allow customers to maneuver shopping carts between the mall and the parking lot, he said.

The aim is &#8220;to make it convenient for the people who want to jump in, jump out &#8230; check their mail or what have you,&#8221; Holloway said. Not decided yet is how many minutes of parking would be allowed in the short-term spots, but it likely would be in the 15-minute range, he said.

The 14,230-square-foot post office will have postal boxes larger than those at the existing base post office, Holloway said. For example, he said, boxes at the new post office, unlike at the current one, will accommodate a typical CD parcel easily.

&#8220;The fact that we have consolidated it for one-stop shopping, to make it more convenient and efficient for people to be able to get all of their needs at one location &#8230; it all comes down to quality-of-life,&#8221; Miller said.