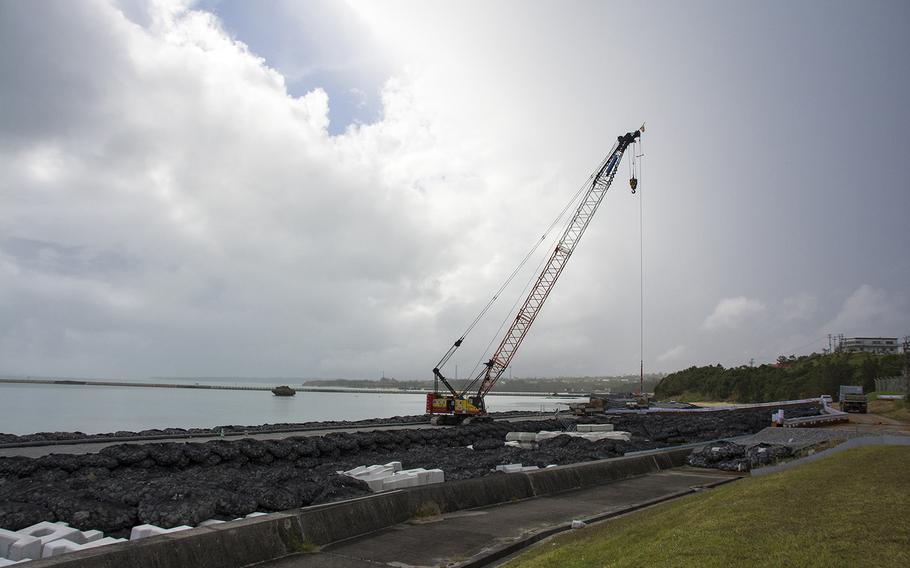 CAMP FOSTER, Okinawa — The Japanese government plans to expand landfill work as early as March on a new U.S. military runway that will lead to the closure of Marine Corps Air Station Futenma, local media have reported.

The expansion site is just over one-tenth of a square mile in size and west of the .02 square mile site under construction in Oura Bay off Camp Schwab, a Marine Corps base in the coastal hamlet of Henoko, Japan’s Mainichi newspaper reported Tuesday.

The phase-two site is being prepped with surveys and seawall repairs.

The Okinawa Defense Bureau plans to inform Okinawan prefectural officials of the plan later this month “at the earliest,” the report said.

The plan is sure to rile members of anti-base Gov. Denny Tamaki’s administration and a small but passionate protest movement, backed by popular support on the island, that stands opposed to keeping Marine air operations in Okinawa.

Prefectural officials said they must be informed of such a move within 45 days of the start of work and that had not yet happened.

As long as Tokyo complies with environmental standards, “we cannot say no [to the plan],” the Okinawa prefectural government’s Henoko spokesman, Hiroyuki Tashiro, told Stars and Stripes on Friday. “At this moment, we have not received any notification regarding a new reclamation area from ODB.”

Bureau officials, who represent the defense ministry on the island, denied the reports, saying a date has not been set for the second phase of construction.

“We are doing our best to comply with environmental safety guidelines and residents in surrounding areas,” Okinawa Defense Bureau spokesman Masashi Katsuren told Stars and Stripes on Thursday. “We don’t have a date set for [the second phase] at this moment.”

Completion of the second phase would ultimately see approximately one quarter of the .6 square mile land reclamation project completed, the Mainichi report said.

About one-fifth of the first phase, which began Dec. 14, is complete. It’s scheduled to finish by the end of April.

Mainichi reported that Japanese government officials want to complete as much of the project as they can before a near island-wide referendum on the relocation Feb. 24, so that the project is seen as being largely a “done deal.”

However, Okinawan officials — backed by their activist base — have vowed not to go down without a fight. They have not ruled out withdrawing future permits or rejecting applications to modify construction plans.

They vowed this week to withhold permission to transplant endangered coral from future reclamation sites. They have also raised questions about the composition of the landfill material itself.

“We have requested ODB to let us do an investigation about the soil [being used for landfill] but ODB said they are doing everything accordingly, complying with the guidelines, so (an) investigation is not necessary,” Tashiro said.

Prefectural officials are still hopeful they will win either through ongoing administrative challenges to the relocation or eventually in the courts, despite previous losses there, he said.

The news is the latest in the seemingly never-ending saga regarding the move of Marine air operations from Futenma to Schwab, which began in earnest in 1995. Following the rape of an Okinawan girl by two Marines and a Navy corpsman, an angry local population demanded that Futenma be closed because of the safety risk.

The plan to build the runway at Schwab was decided during bilateral negotiations in 2006.

The issue ignited a small but vigorous protest movement that has been working to block the project and move Marine air operations totally off the island.