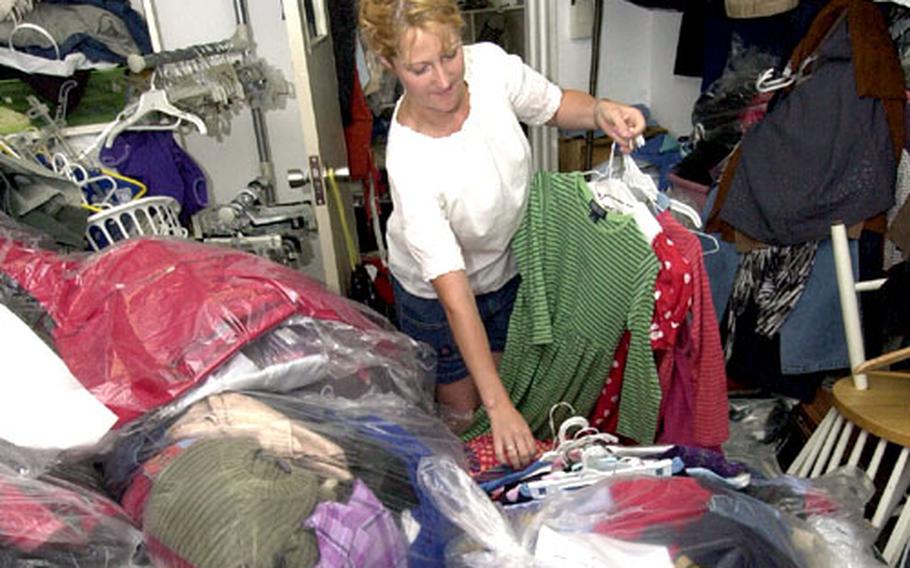 Esther Seep sorts through a pile of donated clothes at the Second Hand Rose shop on Yokosuka Naval Base. (Jim Schulz / S&S)

YOKOSUKA NAVAL BASE, Japan &#8212; It had to be 90 degrees. But Sami Mumper and Epiphany Carey bent over their labors in the hot sun, sorting mounds and mounds of used linens and dishes and shoes and books and artworks and printers and vacuums and seemingly everything that everybody no longer wanted.

The two women and other volunteers for the base thrift store, Second Hand Rose, worked methodically, knowing that somebody else would need or want such items, if only they could sort it, price it and make space for it.

It was early August, in the middle of PCS season, and under Mumper&#8217;s new management, just about any donation of people&#8217;s stuff not making the cut for relocation to the next duty station was welcome.

The store, operated by the Yokosuka Officers&#8217; Spouses&#8217; Club in the north corner of the base near the Navy Lodge and the Seaside Club, takes in donated goods, resells them for peanuts and turns over its profits &#8212; $1,300 a month or so &#8212; to the club for disbursement to base and local charities.

But even before the modest profits are made, the store does good. It gives people on base a place to dispose of things they no longer need or want. And it provides extremely inexpensive goods to people who need or want them. &#8220;It&#8217;s a way for people who can&#8217;t possibly afford to have nice things to get them, or to use in the interim before their things arrive,&#8221; Mumper said Tuesday, as more mounds of items piled up on her doorstep.

Inside the store&#8217;s five rooms was a bazaar of useful, sometimes idiosyncratic items. Among the household goods were Sony speakers for $20; a 20-volume encyclopedia set missing only volumes 4-6, 11 and 16-19 for $5; a floor lamp for $20 and a fancy Krups coffee maker and espresso machine, missing only its carafe, for $20. And just in case someone needed a box of billiard balls, they were there, too.

Still, said Carey, store assistant manager, some customers want to haggle, and some even have been caught stuffing non- bag-room clothes &#8212; the store also sells a few higher-priced items, such as a blue, beaded cocktail dress for $50 &#8212; into their bags.

But Mumper never speaks ill of thieves or of people who might view the store as an easy way to be rid of trash or donate items that can&#8217;t be sold. Most used linens Mumper sends to the base animal shelter; excess luggage goes to security for dog training. And when she just can&#8217;t fit another space heater into the store, she remembers the story she heard about the young military wives who spent the day at McDonald&#8217;s with their children because their houses were so cold. So she puts the heater over by the Dumpster and, she said, &#8220;pray that somebody gets it before it goes into the garbage.&#8221;

And Mumper, whose last job was hospice chaplain in Texarkana, Texas, still exhibits reserves of patience when that of others has worn out. At the end of one recent, long day, she recalled, as it grew dark while the store workers sorted through donations, one of the women going through a particularly bad assortment remarked, &#8220;&#8216;Well, thank you for your garbage.&#8217;&#8221;

&#8220;At the same time I picked up this box,&#8221; Mumper said. &#8220;Everything in it was folded so nice and neatly. And you could smell the Downy. It was so from the heart. They wanted somebody who was going without to have what had been their best. Tears just came to my eyes.&#8221;

Mumper views her work in the store as a way to help not only the military community but the broader one as well, she said. She&#8217;s particularly happy that some of the money earned at the store goes to a local orphanage. But some days, she gets an instant return.

Tuesday, Petty Officer First Class David Hackley was shopping at the store, where, he says, he likes to &#8220;peep in&#8221; from time to time to see what&#8217;s new. Tuesday, he saw a clock, a replication of a piece of the Vietnam War Memorial with the names of the dead carved into the black granite. He wanted it for his office wall. He asked how much it was, and since it hadn&#8217;t been priced yet he was referred to Mumper.