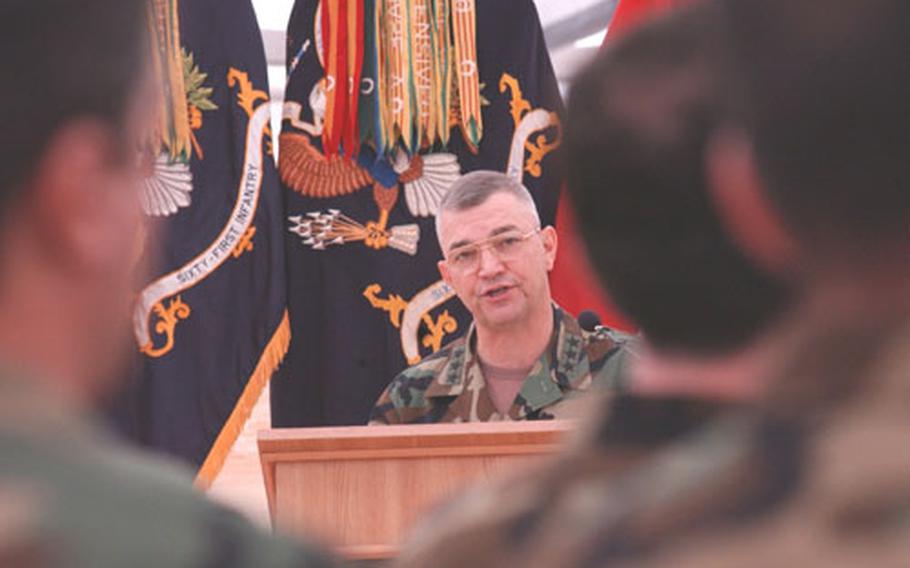 TUZLA, Bosnia and Herzegovina &#8212; The second group of Iraqi expatriates will soon join American and coalition forces in the Middle East to fight against Saddam Hussein&#8217;s regime.

A graduation ceremony Friday marked the completion of a challenging and busy four weeks of Iraqi volunteers&#8217; training at Camp Freedom in Taszar, Hungary.

Because of operation security, U.S. Army Maj. Robert Stern, spokesman for Training Task Force Warrior in Hungary, could not specify where the Iraqis will work and when they will start. He said they will work with U.S. civil affairs units.

Iraqi volunteers will serve as liaisons between the military on one side and nongovernmental and government relief organizations on the other, providing relief in Iraq.

The U.S. military picked the trainees from a list of people opposing Saddam Hussein. All of the participants, who come from all over the world, went through a tough screening process before they started training, Stern said.

&#8220;They all put aside their differences to participate in this, to return to free and democratic Iraq,&#8221; Stern said.

During the four weeks, the volunteers learned basic self-defense skills, part of which was handling a 9 mm handgun. They also learned about different relief organizations, such as Red Cross and Red Crescent, and how they function. Basic English was taught as well.

While three Iraqis from the first group dropped out of the training, everybody in the second group of volunteers graduated Friday, Stern said.

The military will announce when the next group arrives for another round of training, he said.

In a phone interview, Stern said he was touched during the graduation ceremony.

Busy with preparations for departure for their new jobs, no Iraqi graduates were available for a phone interview with Stars and Stripes, Stern said.

In the interest of their safety and that of their family members, some of whom are still in Iraq, Stern could only say they will be leaving Hungary.

&#8220;Your knowledge and skill will be invaluable in restoring local order and essential services to a future peaceful land,&#8221; Cavin told the Iraqi volunteers.

&#8220;Some men just read about history, but you men, standing tall in front of us today, have chosen to make history,&#8221; Cavin said.